‘They’re from your part of the world,’ said our Editor, offering me the first two CDs listed above, which are respectively by Shetland and Orcadian artists.  As an English incomer, even one with an Edinburgh granny, I think I would amend that to ‘You’re from their part of the world.’  On the other hand, while Debbie Scott, born in Papa Stour, remains a Shetland resident, Catriona MacDonald is now based in the Scottish Borders, and plays all over the world.  The Wrigley twins, who are also musical globetrotters, make their home in Edinburgh.  One could say, then, that these musicians are not just from the Northern Isles, but quite a long way from them.

Shetland and Orkney musicians have always had their ears open to the sounds of their Scottish, Irish and Scandinavian neighbours; but cheap international travel and the mass media have opened up additional prospects of cross-fertilisation and interaction with distant cultures.  A corollary of this is that all over the world, many traditional and traditionally based musicians no longer play only for audiences drawn from their own cultures.  Folk music is now often presented to an audience as an experience of otherness - rather than reflecting an aspect of that audience back to itself - and is accordingly packaged and marketed on a professional and global basis.

All of which, you may feel, is no more than a set of obvious truisms, and probably the prelude to yet another anorakish discussion of ‘What is folk music?’ and/or a mouldy fig rant about taking liberties with the sacred texts.  Well, no.  The two most interesting blues CDs I’ve heard in recent years have been by Alvin Youngblood Hart (who throws everyone from Skip James to Bob Wills to Captain Beefheart into the pot) and Corey Harris (who plays blues with added jazz, ska, funk, French café chanson and more). 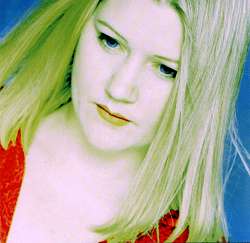 And the best gig I’ve ever been to in Shetland was by Edward II (English country dance/polkasteady?)  My chief criterion, when considering music that blends elements from different cultures, or that mixes the old with the new, is, "Does it work?"

Which brings me to Catriona MacDonald, and the answer - "Mostly, no".  Having looked at the press quotes on the Peerie Angel website

The backing is provided by various combinations of piano, double bass, guitar, accordion and drums/percussion.  (There are also guest appearances by bodhran, and, on the last track, an extraordinarily uninteresting‘church organ’ [sic].)  The resultant sound is too often texturally and rhythmically monotonous, creating a chordal undertow that is by turns droningly sentimental and thumpingly sub-rock.  When the texture thins out, as for instance when Aimée Leonard’s bodhran comes through clearly on The Monday Morning Reel, it only points up the problem with much of the rest of the material.  Dennis’ Tune is a pleasant piece of ‘teach yourself Bulgarian wedding music,’ and the traditional Land ta Lea and Tame Her When da Snaw Comes both achieve a real drive, wild but disciplined.  As for the rest, though, it’s regrettable that astute marketing will lead many people to believe that this sort of thing - traditionally based, but crowbarred into a niche of the rock music industry - is typical of Shetland fiddle music, and/or the best it can offer.

The Wrigley twins also have added instruments alongside their own fiddle (Jennifer) and guitar and piano (Hazel); at various times, banjo, mandolin, bass guitar, concertina, whistle and percussion make their contributions. 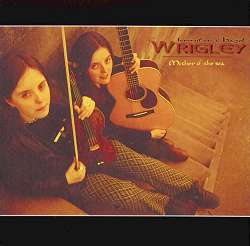 However, unlike their previous CD Huldreland, which apparently (I haven’t heard it) featured ‘an array of distinguished guests’, the emphasis here is firmly on the skills of the name artists.

Textures are kept clear and open - no mean achievement with a bass guitar in the frame - as this extract from Running the Lee / The Flotta Dash will show. (sound clip)  The accompanying press pack refers to their music as ‘a sparkling blend of traditional, contemporary and original material, invigorated with jazz, blues and ragtime flavours,’ but the compositions on this CD, whether by the sisters or others, are mainly Orcadian, and seem to be from firmly within the context of local traditions.  It’s especially nice to hear a polka set, although whether the dance is a particular favourite in Orkney, I don’t know.  In Shetland, it seems to be known, but not much done, and the only time I’ve seen a polka danced in Skerries, the music was being supplied by a couple of visiting Norwegian fiddlers.  The discords and drones of The Duchess of Gordon / Scotification supply a witty comment on the music of the mainland and its influence on Orkney.

What’s most impressive in such young performers, though, is their authority and grace on the slow tunes.  There aren’t many such; even Adelaide, written ‘when feeling particularly home sick,’ is taken andante con moto or thereabouts, while its partner, The Phantom Flight (‘When on a long tour, some flights seem to blend into one, until your [sic] not sure where your [sic] going or when you will return!’) is positively jaunty.

However, The Trip to Orkney Waltz is both beautiful and beautifully played, while Davie Eunson’s tune for his wife is shimmering, burnished, and perfectly gorgeous.  (sound clip)  It’s a pity that so much fine music is rather unappealingly packaged; in an ideal world, CDs would sell on the quality of the music they contain, and on that basis, Mither o’ the Sea would walk off the shelves.  This isn’t an ideal world, though, and without wishing to suggest that traditional music needs to follow classical music marketing down the Vanessa Mae/Linda Brava wet-t-shirts-and-bustiers road, next time it might be an idea to commission a photographer less influenced by Diane Arbus.  Splendid music, anyway.

Of the many records I bought in 1999, the two most satisfying were both purchased late in the year, and both were by Shetland fiddlers.  One was Gibbie Hutchison’s Shetland Springs fae da Bonnie Isle, which is reviewed elsewhere on this website; the other was Debbie Scott’s eponymous release on Veesik. 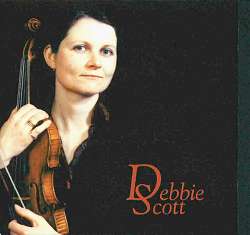 Like Catriona MacDonald (and Trevor Hunter, and many another), Debbie was a pupil of Dr Tom Anderson’s.  As a youngster, she recorded an album (Selkie’s Song), and played with Peerie Willie Johnson (for whom she wrote The Bouster Boy), and as a member of Garster’s Dream Band.  She retired from public performance in the nineties to bring up her daughters.  On this astonishing comeback CD, she is mostly accompanied by John a’ Burns (Gibbie Hutchison’s son) on guitar and double bass; the Bouster Boy himself, makes a guest appearance on the set in which that tune appears, and Alan Clark plays accordion on Pionersk/Cutty Sark.  The ‘Pionersk’ was a klondyker (Russian factory ship) which ran aground on the Unicorn on a wild night; the rescue of the crew was a routine display of heroism by the crews of the Lerwick lifeboat and the Coastguard helicopter.  Unfortunately, the tune is ‘Russian by numbers,’ and one of the few disappointing tracks.  (The untitled tune, which is separated from the official last number by a lengthy silence, is also pseudo-Russian cliché.)

The rest of the CD, though, is a delight.  In the light of the pseudo-Russian compositions, it won’t be surprising that Debbie ranges beyond Shetland for material, to Ireland and the USA (Cluckin’ Hen), and she certainly takes in those jazz and ragtime influences referred to in the Wrigley Sisters’ press material.

Here’s a clip from Donnie Henderson’s Reel, a tune for her late grandfather, which is rather more Scott Joplin than Scott Skinner; it will also serve to illustrate the tasteful, unobtrusive lift of John Hutchison’s accompaniment. (sound clip)

The majority of the tracks, though, are either original compositions, or traditional Shetland tunes like the Bride’s Reel, an old wedding tune from Papa Stour, played unaccompanied. (sound clip)  To illustrate simultaneously the strength of her composing skills, the way those skills are firmly anchored in tradition,

and the beauty of her playing, here’s an extract from Magnus Hendrichson’s Waltz. (sound clip)  The CD as a whole is of an unflaggingly high standard (the couple of exceptions I’ve mentioned apart), and while it doesn’t matter to me if this review has no effect on Catriona MacDonald’s sales, I would be sorry if I have failed to persuade at least a few readers to invest their time and money in Debbie Scott’s music.

(In case of difficulty ordering, Veesik can be contacted by email on:  veesik.records@zetnet.co.uk)