The Music of Ed Reavy

Light through the Leaves

Irish music goes back a long way in America.  When Francis O'Neill arrived in Chicago in 1873, he found a thriving musical community, which was to provide the source of his collection of Irish dance music, still regarded as a major reference today.  A vast body of private and commercial cylinders and 78s was recorded in New York, Chicago and Philadelphia over the first 40 years of the 20th century which far outnumbered recordings in Ireland at that time.  In the early to mid sixties, Ciaran MacMathuna recorded a strong Irish community in America.  Some of the New York and Philadelphia sessions were issued by RTE on the tape The Job of Journeywork.  Among the musicians featured were emigrants Larry Redigan, Paddy Reynolds, John Vesey and Denis Murphy playing with American born Charlie Mullvihill and Andy McGann among others.  In the early '70s several of these were recorded for Shanachie records.  Think of Irish American music at the end of the 20th century and you'll probably think of Eileen Ivers, Liz Carroll and Seamus Egan who have released records in a heavily jazz influenced style which is radically different from that recorded in Ireland itself.

These three CDs are re-issues of LPs released in the late 70's and claim to give a snapshot of the music and musicians in and around Chicago and Philadelphia 100 years after O'Neill arrived.  The music was recorded and produced by Miles Krassen, Larry McCullough and Mick Moloney, funded by a grant from the American National Endowment for the Arts.  They have been available in various discount formats for the last few years.  These reissues include extensive booklets which give background on music making in these cities, some information on the tunes as well as biographies of the players with updates written in 2000.  The recordings are grouped thematically, covering music in Chicago, music on wind instruments, and a range of musicians playing Ed Reavy's compositions.  Each CD is about 40 minutes long – the standard length of LPs, so there has been no revision or re-editing to include any other material from the time, as often happens with re-issues.  Most of the players featured are native born Americans or people who emigrated as children.  Among the few musicians who would have learnt their basic style at home before sailing for America are Paddy Cronin, Eugene O'Donnell, Frank Thornton and Terry Teahan.

The first CD features the compositions of Cavan born fiddler Ed Reavy played by Ed himself in duet with his son, some of the players who also appear on the other CDs and a few Irish natives such as Maeve Donnelly and Paddy Cronin. 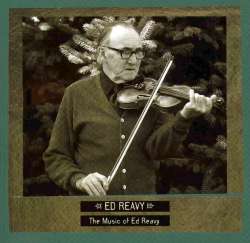 A volume of Reavy's tunes, Where the Shannon Rises, was published in a limited edition in New York in 1971 containing about 80 tunes, and a couple of years ago an updated collection was published containing 127 tunes.  This last collection was accompanied by three cassettes featuring all the tunes played on fiddle by Ed's son Joseph.  The sleeve notes here record Ed noting that his son "only plays a bit" and I find the cassettes a little tiring on the ear.  So if you want to pick up a few of the less well known Reavy tunes, this is a better source.  Most session players get by with half a dozen Reavy tunes but one or two here are worthy of more exposure.  Several of the players are well known, Brendan Mulvihill and Billy McComiskey were members of the group The Irish Tradition at the time of recording and others such as Liz Carroll and Paddy Cronin are recording stars of different generations.  The music is generally well played and the fiddlers included all display a sound technique and a good understanding of the Reavy style.  Ed's own tracks with his son Joe are marred by a heavy handed piano.  The best playing on display is from Maeve Donnelly who was recorded while on a short tour of the States.

The sleeve notes run to thirty odd pages and include a short biography of Ed and his musical background, as well as his own comments on the various references to places and people in the tune titles.  The booklet also includes a review by Larry McCullough of Reavy's compositional style packed with references to modality and modal shifts and an analysis of the melodic construction of the tunes.  A lot of this is too technical for the average reader like myself.  I'm not convinced that Reavy composed tunes in such an academic way although some tunes sound calculated to achieve a certain effect.

The CD Traditional Irish Music in America - Chicago gives prominence to two older musicians Joe Shannon (pipes) and John McGreevy (fiddle), who both learnt their music in America.  On this CD they provide 7 tracks, solo or duet. 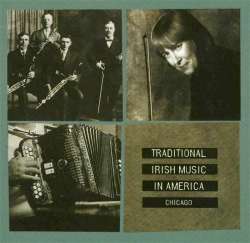 Joe Shannon was born in 1919 and emigrated at the age of 10.  He learnt the pipes in Chicago from his cousin Eddie Mullaney.  On this recording he plays a huge Taylor set with an extended second bass regulator and what looks on the photo like double bore tenor and middle regulators.  The sound as you would expect from a Taylor is also huge.  Great claims are made in the sleeve notes for Joe's affinity with the pipers of the past and his continuity of the American style of piping developed by Patsy Touhy, Tom Ennis, Michael Carney and Eddie Mullaney, who all recorded in the 1920s.  Touhy died in 1923 and Ennis in 1931 so Joe would have no first hand contact with these men.  His style is very open - what I once heard Robbie Hannan describe as flute playing.  As a performer he is competent but does not merit being hailed by the sleeve notes as the link to pipers of the 19th century.  This sort of hyperbole is out of place and is particularly annoying as Larry McCullough, who wrote the sleeve notes has a doctorate in ethnomusicology and should know his stuff better than this.  John McGreevy is the fiddle player who recorded an LP with flute player Seamus Cooley, brother of the more famous Joe.

Kerryman Terry Teahan plays a one-row accordion and concertina and puts his style and repertoire down to two years of tuition from Padraig O'Keeffe.  He emigrated at the age of 23 but didn't play in America for nearly 20 years after that.  His playing has the bounce that characterises one-row box playing, but the years have tempered his execution.

Liz Carroll is now a well known and much admired exponent of the Irish American style of fiddle playing.  These are her first commercial recording with American born piano accordion player James Keane (not Sean Keane's brother of the same name who also currently lives in America).  These are nicely played tunes, all recent compositions, all reels and I think the 'straightest' playing you're likely to hear from Liz Carroll.  On an editorial note, the last but one tune, here titled Eddie Kelly's is credited to an unknown Roscommon fiddler.  This tune is The Green Fields of Glentown written by Tommy Peoples, which should be well known since Tommy included it on his CD The Quiet Glen a couple of years ago.  It's a pity that the error wasn't corrected when the sleeve notes were updated.  While there are some things of interest on this CD it's not a 'must have' in my opinion.

Turning finally to the last CD, Light Through the Leaves -Traditional Irish Wind Instrumentals, I find it hard to find any positive features over the forty odd minutes of playing on this CD.  The tone is set on track 1 by Tim Britton playing two of his own compositions on the uilleann pipes at the tender age of 16 or 17.  One can only marvel at the confidence of youth, because while the tunes are littered with tight triplets on F#-G-A in the bottom octave and G-F#-E in the upper octave, they seem to have been written as vehicles for what the piper sees as his own digital dexterity rather than demonstrating the use of these devices to enhance a good tune. 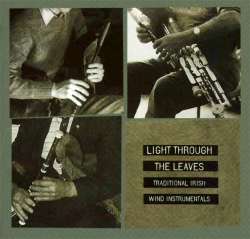 His use of the ghost D at every opportunity is, to my ear, in poor taste.  Tim finishes the CD with the worst variations on The Earl's Chair that I have ever heard.  When he plays the normal first part of the tune once, you see how little he brings to what is actually a very interesting tune.  Other pipers included here are Bill Ochs and Al Purcell.  Al Purcell who died recently enjoyed a reputation as a fine interpreter of slow airs.  On the evidence here, I can't agree.  The start of the second part of The Dear Irish Boy is rushed and does not follow the normal pace of the melody and his rendering overall is very bland and unornamented.  Bill Ochs cites Pat Mitchell as his main influence but while his playing has some of Pat's rhythm, he has none of Pat's command of ornamentation and subtle variation.  Bill Ochs also writes the sleeve notes on this disc and these are at best simplistic in documenting the influences and style of the three pipers featured.  If you really want a picture of the state of uilleann piping in the mid '70s listen to Pat Mitchell's own LP or The Piper's Rock, an excellent compilation of young pipers recorded by PJ Curtis in the late '70s and released by Mulligan.

Tin whistle player Larry McCullough is now well regarded as a producer and writer.  His playing on this recording is competent although his overuse of rolls tends to lose the sense of the tune.  Unfortunately I cannot commend his choice of tunes.  He erroneously combines the first part of Ah Surely with the second part of A Rainy Day and calls it The Congress.  He similarly introduces a foreign second part to The Banks of Lough Gamhna, and includes two of his own compositions which sound like cobbled together half-remembered snippets of other tunes.

The flute players Noel Rice, Mike Rafferty and Richard Hughes favour silver flutes which sound more like low pitched tin whistles than the reedy timbre that wooden flute players prize so highly.  Noel Rice also composes, but fails to maintain an even tempo to make his playing entertaining.  With the wealth of great flute CDs available now, the players here offer nothing to help the tyro and only frustrate the experienced player.

Across the CD the playing is marred by a lack of lift or steady rhythm and the absence of tastefully used ornamentation which really are fundamental to good Irish dance music.  You'd find better musicians at an average session - with far better settings of the tunes.

Listening to the three CDs gives the impression that when musicians become separated by time or distance from the tradition, it's hard for them to maintain authenticity and to resist becoming sterile and bland.  It seems to take more than occasional contact with native Irish players.

Irish music in America was at some sort of crossroads in the 1970s.  If these records don't document the changes to Irish music in America over the last decade or so, they do show signs of stagnation which might have driven some players to look for other influences.  Since these recordings were made, a polyglot style has developed taking on board bits of bluegrass and old-timey fiddling, jazz and rock to leave Irish American music as a different entity from native Irish music.  These CDs also indicate the readiness of Americans to write new tunes more in keeping with their new style of playing.