Usually, it's people who don't like a particular music who characterise it as "all sounding the same."  Not always, however, as witness the following conversation:

If ever there were a cure for such a simplistic description, this CD is it.  It's a revised, extended and remastered version of Reg Hall's 1973 Folkways compilation of the same title, drawing its material from commercially recorded 78s cut in America, Ireland and England between 1922 and 1948.  The CD also has the benefit of new notes by Hall, who has drawn on oral histories and reminiscences, the contemporary press (meaning mostly dance advertisements), and a deep knowledge of the music and of the social and historical contexts in which it was made. 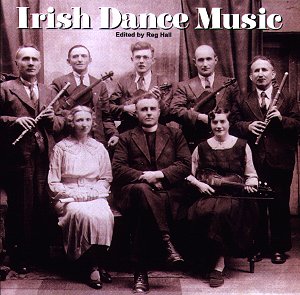 Almost the only name among the artists previously known to me is that of Michael Coleman, the Sligo fiddler who became the most famous and influential player of his time - and of later times as well, thanks to his recording career.  From the first, recordings were a two-edged sword, enabling future generations to hear how such a superlative talent as Coleman sounded, but also encouraging homogeneity, and stifling the continuance of local traditions.  That said, there's no denying the virtuosity of Coleman's playing on O'Dowd's Favourite Reel Medley, the earliest selection on the disc.

Others of the musicians included may well be famous names to those who know more about the field than I do.  Frank Quinn, for instance, who opens the proceedings, is said to have been a prolific recording artist as singer, fiddler and accordionist, and is to be the subject of a Viva Voce issue.  This will be one to get, judging by The Westport Chorus, "a blast of good reels, played as tightly yet as freely as any duet could possibly manage." The duet consists of Quinn (fiddle, lilting and shouting), and "P Crowley" on button accordion.  There's some exuberant lilting elsewhere too, never more striking than on The Maid of Ballinatra, where George Halpin's rough country fiddle is joined by two women lilting in harmony, and that well known pianist, Anonymous.

One tries not to make reviews like this into a mere list of highlights, but it's very difficult to do otherwise with this wonderful anthology, since the choosing has obviously been done with that in mind.  However, I'll confine myself to pointing out button accordionist Michael J Grogan's dazzling deployment of Scotch snaps in the hornpipe set Off To California/Dunphy's, and - on another hornpipe set - the presence of the stunning piano player Eleanor Kane (then a teenager) in Pat Roche's Harp & Shamrock Orchestra, formed to play at the 1934 Chicago World's Fair.  Kane's driving, highly ornamented style, which knocked me out when I encountered it on the excellent Rounder anthology From Dublin to Galway Bay, is reminiscent of the astonishingly ornate styles developed by the pianists who accompany fiddlers in Cape Breton.

I started by saying that Irish Dance Music is the antidote to charges of 'saminess' in Irish music.  The gulf between the polished playing of Michael Coleman, and the utterly unpolished, but just as compelling playing of George Halpin is one illustration of that.  Reg Hall has also included a number of unusual instruments and/or combinations, like the tambourine that accompanies Tom Morrison's flute on Sweet Flowers of Milltown/The Boys of Knock, or the two fiddles, cornet, piccolo, piano and drums of McConnell's Four Leaf Shamrocks, playing a gently bouncing polka set.

Weirdest of all, beyond a doubt, is the barn dance set Stack of Oats/Shannon's Wave, played by Erin's Pride Orchestra.  Recorded in Philadelphia in 1948, and thus the most recent item included, it features two fiddles, piano accordion, banjo, drums - and tenor saxophone! This turns out to be a perfectly fine way of playing Irish dance music with, as Reg Hall observes "a punchy yet relaxed drive and great swing." But then, recipes for success can come in unlikely guises: Father Tom Larkin's stern opposition to "jazz dancing" resulted in the formation of the Ballinakill Traditional Dance Players, working class fiddlers and flautists playing by ear, and Anna Rafferty, a schooled, middle class pianist from the big house.  With Father Tom drilling the musicians, and writing out agreed versions of the melodies from which Miss Rafferty improvised chords, the band was both successful and influential, but as Hall points out, they would never have mixed socially outside the band.

To all this glorious and varied music there is added a set of notes that tell you almost everything there is to know about the music and the musicians, as for instance: 'They were taught the violin at school by Brother John O'Gorman just after the Great War, specifically to play for ceilidh dancing at Irish Self-Determination League branch meetings held in a storeroom behind Bolger's tailor's shop at 5 Queen's Road in Peckham.'  Yes, but which day of the week?  I'll be surprised if I encounter a better compiled or better annotated set of vintage recordings in any musical genre this year; if I do, I'll be even more surprised if it's as much of a joy to the ears and the feet.