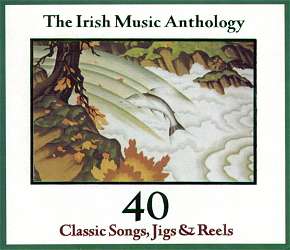 When evictions and the famine packed the ships that sailed from Cork,
They were bound for Ellis Island in the harbour of New York,
This new world, this land of plenty must have seemed so very strange
But they had their fiddles, pipes and songs to help them through the change.
There were Germans, Poles, Italians, playin' polkas oompah-style,
But the boys who had them reelin', they came from auld Erin's Isle'
Touhey, Ennis, Coleman, Morrison, and bands made up by Chief O'Neill,
Daddy Rice he softshoe-shuffled while he fiddled jigs 'n' reels.
What a time it must have been when the century had turned
And all the music came together in the brave new world.


These evocative words are from Ron Kavana's song, What a Time and refer to what many would regard as the high water mark of recorded Irish music.  This double CD is Ron's latest compilation of transfers of 78's of Irish music recorded, mainly in America, but also in England and Ireland.  Each artist is allowed just one track, except where they also appear as part of a duo.

The last few years have seen a rash of CD reissues of Irish music from 78s, most notably from Topic (Irish Dance Music TSCD 602, Past Masters of Irish Dance Music TSCD 604), Rounder (From Galway to Dublin CD1087, Milestone at the Garden, CD1123) and Harry Bradshaw's Viva Voce label.  Proper had themselves issued a 4 volume box set, Farewell to Ireland (PROPERBOX 3) featuring recordings made in the USA in the 1920s and '30s which was also compiled by Ron.  He had previously explored the territory in his reissue project from the Topic back catalogue for Globestyle (I'm Leaving Tipperary CDORBD 082).  His notes to the earlier recordings demonstrate a deep love for and understanding of the music.  The present offering differs in that it includes several examples of parlour song from noted Irish tenor and sopranos (John McCormack and Margaret Burke-Sheridan, for example).  Almost without exception, I found these to be rather too mannered and polite for my taste.  Their inclusion does however give perhaps a more balanced picture of what the average, rather than the specialist, listener at who this CD set is surely aimed, thinks of as Irish music .

The set begins with one of my favourite Irish American artists, Frank Quinn.  He was a native of Co Longford whose family emigrated early in the last century and a fine singer, an excellent fiddle player and a more than passable accordion player.  He was also the most prolific of the early Irish artists recorded in New York with some 180 recordings between 1921 and 1936 to his credit.  Sailing Home is a novelty number with Joe Maguire, one time leader of the Pride of Erin Orchestra, which does not really show him at his best but does get the CDs off to a lively, light hearted start and is quite typical of a lot of his popular repertoire.  His best known song to today's listeners is probably Paddy McGinty's Goat, which used to be sung by Val Doonican in a style surprisingly true to the original.  If you don't know his work and want to see just how good a singer Quinn is, listen instead to The Tanyard Side (Topic TSCD660) or The Rocks of Bawn (Rounder CD1087) which he sings to his own fiddle accompaniment.  A complete CD of his work is available on Arhoolie (If You Are Irish, Arhoolie Folklyric CD 7033).

Fiddle players, especially those based in America, are well represented.  Michael Coleman, James 'The Professor' Morrisson, Paddy Killoran, Packie Dolan and the mysterious K Scanlon all give their usual polished performances, in spite of the almost inevitable unsympathetic piano accompaniment, so the Sligo style does rather dominate.

There is even, rather unusually, an example of Packie Dolan's singing (Mother Malone) which I'm afraid is not in the same class as his playing.  All these will probably be well known to readers so here instead is Hugh Gillespie playing the highland Curran's Castle (sound clip), a tune that was unfamiliar to me.  Although from Donegal, Gillespie was greatly influenced by Michael Coleman with whom he often broadcast, so his playing mixes elements of both styles.  Unlike most of his contemporaries, he was able to fulfil the dream of making his fortune in America and then returning home.  He died peacefully on his farm in Donegal in 1986.

Fortunately, not all the great musicians emigrated and here is another Donegal player, the wonderfully eccentric and quite unique Neil O' Boyle, this time recorded in Ireland with the strathespey The Highland Home, happily without accompaniment.  (sound clip)

Not all the vocal tracks are of parlour song.  The Garden Mother's Lullaby (surely that should be Garten or Gurteen) is sung very nicely by Barbara Mullen although the piano accompaniment adds absolutely nothing to the performance.  It is a song which is popular in Australia and I think was in the repertoire of the wonderful Sally Sloane.  The only Barbara Mullen I know was a Scots actress best known for her role as the housekeeper in the TV show Dr Finlay's Casebook.  The singer does not sound particularly Irish so it could her but I can not be sure.  Delia Murphy is a singer that I have always found hard to categorise.  She did learn many of her songs in the approved traditional manner from members of her family, local villagers and the travellers she met around her home and several of these songs were taken up by the folk revival.  Her background though was not that of a country singer.  She was born into a wealthy family (her father had made his money in the Klondyke gold rush before returning home) and married a high ranking Irish diplomat she had met when they were at University together.  She often appeared in concert with noted tenors such as John McCormack and Richard Hayward early in her singing career and a lot of her early recordings do reflect the concert stage.  Here, however, she sings The Bonny Girl's Lament quite beautifully and with great restraint, but with rather strange accompaniment - it sounds to me like amplified guitar.

The only true country singer is Paddy Beades.  Here he sings My Darlin' Colleen Bawn to the tune usually associated with the Wild Colonial Boy (sound clip) with accompaniment from an unknown fiddle player which fortunately does not detract too much from his fine singing.  A Roscommon man, he was one of very few Irish country singers to record commercially having made some 40 sides between 1937 and 1954.  He also appeared in Topic's Voice of the People.

There are several lively contributions from various Ceilidh bands which are consistently enjoyable.  Frank Lee, although he lived his whole life in London is generally credited with having first coined the term 'Ceilidh Band' and he appears here with his Tara Ceilidh Band.  The rhythm playing on his track of three jigs is especially tight and has a syncopated sound that suggests the influence of New Orleans jazz playing.  He recorded extensively in the 1930s.

At the end of the day, though, for me, it is the 4 tracks of solo piping by those past masters, Patsy Touhey, William Andrews, Liam Walsh and Leo Rowsome which are the most enjoyable aspects of this set of CDs.  I do not know enough about the technicalities of the pipes to be able to give a detailed description of their respective styles.

What I can say is that all give wonderful performances and sound quite unlike each other.  Patrick J 'Patsy' Touhey was a Galway man and one of the first pipers to be recorded.  Here he is recorded, I believe, by Victor in 1918, making it one of the oldest recordings here, playing the reel Drowsy Maggie.  (sound clip)

The quality of the reproduction is generally very good with only a few tracks falling below the standard set elsewhere, the Thunder Brothers version of The Tipperary Christening being a notable example.  Their inclusion is justified on the grounds that these are important and rare recordings and that no better original could be found.  It is clear from Ron's notes that this is one of his favourite items, but I'm afraid I thought it just too clever and contrived and absolutely hated it.  You can't please all the people all the time!

Strangely, in view of the work that must have gone into the remastering, no engineer is credited with the CD transfers.

Most of the performances on this collection are available elsewhere so the CD will probably not appeal to owners of the Topic or Rounder CDs and I doubt that the parlour songs will be of much interest to MT readers.  However, this is a double CD which sells for barely half the price of a normal single CD and I think that there are enough fine tracks to justify the modest outlay, especially it you have not before explored early recordings of Irish music.