In August 1903 Cecil Sharp met his first traditional singer, the Somerset gardener, John England, and in December of the same year, Ralph Vaughan Williams had a similar encounter, this time with the Essex labourer, Charles Potiphar.

The story of the former meeting has tended to overshadow that of the latter, but they were both highly significant in the development of both the Edwardian and post-war revivals.

In many ways the two encounters had very different outcomes.  Sharp's meeting was a step on the road to a pioneering theory of folk song evolution and the inclusion of English folk songs into the school curriculum.  Vaughan Williams's encounter, on the other hand, 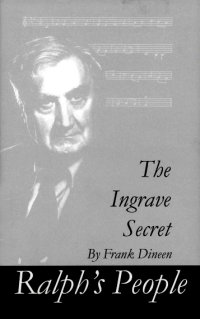 led to the use of folk song tunes in the English Hymnal and as a source of inspiration for some of the most notable English classical music of the first half of the 20th Century.  In addition, Vaughan Williams collaborated with A L Lloyd to produce the Penguin Book of English Folk Songs (Penguin, 1959 and recently re-issued as Classic English Folk Songs, EFDSS, 2003), a work which had a great influence on the post-war revival.

Frank Dineen's book attempts to shed light on the encounter between Vaughan Williams and Potiphar and to describe the circumstances which led to their meeting.  The story at the heart of the book is quite simple.  Kate Bryan, owner and Headmistress of a Brentwood girls' school, instituted a series of extra-mural classes under the auspices of Oxford University.  Miss Bryan set up an organising committee, a member of which was Georgiana Heatley, the middle-aged daughter of the Vicar of the nearby village of Ingrave.  In the Spring of 1903 one of the first lecturers was the 30 year old Vaughan Williams who, over a six week period, gave a series of weekly lectures on folk song (Roy Palmer, in his indispensable Folk Songs collected by Ralph Vaughan Williams, Dent, 1983, tells us that RVW was already something of an authority on folk song and was very familiar with the works of Kidson, Baring Gould and the Broadwoods, and that Lucy Broadwood had sung illustrations for some of his lectures).  Miss Heatley, inspired by the lectures, took the initiative to collect folk songs among the older inhabitants of Ingrave.  She passed these songs on to Vaughan Williams and subsequently she, and one of her sisters, invited him to a tea at the Vicarage.  The tea was organised by the Vicar, for the old people of the village, and the purpose of the invitation was for Vaughan Williams to hear some of them sing; but apparently, on the day, they could not be persuaded to cooperate.  Nevertheless, the next day (4th December 1903) Vaughan Williams visited Potiphar, at his home in Ingrave, and heard him sing Bushes and Briars and several other traditional songs.  This, of course, was Vaughan Williams's legendary 'moment of epiphany' and he went on to collect some 810 songs over the next 10 years or so.

Mr Dineen tells us what he knows of the lives of Charles Potiphar, Georgiana Heatley and Kate Bryan.  Of these, the least is known about Potiphar - this is not surprising, as poor labourers like Potiphar left nothing much behind except a few dry statistics.  We learn something of his ancestry, of his birth and marriage, details of his children, something of his employment history (it is interesting to note that, at one point, he was a labourer on the railways) and of his death in 1909.  We are also provided with a list of the 12 other songs that RVW collected from him (Potiphar seems to have had a more interesting repertoire than John England, who appears to have known mainly music hall songs - see Still Growing, EFDSS & Folk South West, 2003, p.47).  Mr Dineen indulges in a fair amount of speculation with regard to the function that folk song may have played in Potiphar's life.  For instance, he surmises that Potiphar may have wooed his future wife, Mary Ann Wood, with his rendition of Bushes and Briars but presents no evidence for this - for all we know she may have hated his singing!

There is a tantalising photograph in the book of the Ingrave and District Edward VII Coronation Party (1902) and Mr Dineen tells us that the Potiphars are 'almost certainly' in the picture, but the annotation to the photograph has been lost and they cannot be positively identified.

I was somewhat disappointed that the book contains only a bare minimum of information on the singer Mrs Humphreys.  After all, Mary Ann Humphreys was an Ingrave resident and 'one of Ralph's people'.  Vaughan Williams actually made a recording of her singing, on wax cylinder (this recording is reproduced on the CD, A Century of Song, EFDSS CD02, 1998).  On the recording a stately and lyrical performance of Bushes and Briars contrasts with a lively and rhythmic rendering of Tarry Trousers.  Mrs Humphreys' technique is so assured and her diction so clear (I have heard her singing described as sounding, “a bit posh”) that one wonders if she had had any musical training.  On the other hand it would be interesting to know if Mrs Humphreys' style was, in any way, typical of other Ingrave singers.  Certainly, Mr Dineen echoes Roy Palmer in stating that Mrs Humphreys learned her songs from members of her family, including her grandmother, Ann Smyth (b.1794).  It would appear that RVW did not collect any songs from Mrs Humphreys until April 1904 and did not make the recording until 1909 (shortly after Potiphar's death).  Oddly, given the sparseness of any other information, the book does contain a photograph of Mrs Humphreys' former cottage!

In conclusion, this is a rather curious and uneven volume (and at only 84 pages, very expensive!)  It does, however, tell an interesting story that deserves to be told (and probably should have been told long ago!)  Georgiana Heatley certainly seems to be deserving of more credit than she has hitherto received.  I just wonder how much more there is to be discovered?  Sadly, Frank Dineen will not be writing any more books on the subject; Stephen L Connock, Chairman of the Ralph Vaughan Williams Society, tells us, in his Introduction, that Mr Dineen died soon after completing the present volume, in 1997.

The book is published by: Albion Music Ltd, A Division of the Ralph Vaughan Williams Society - hardback, pp 84, Ł25.  Available from the RVW Society for Ł15 + p&p for members; Ł20 + pp for non members.  See www.rvwsociety.com/albionbooks.html