This substantial book is the journal of Cumann Cheol Tíre Éireann - the Folk Music Society of Ireland - issued in a double volume after a lapse of 16 years since Volume 4 was published in 1985. 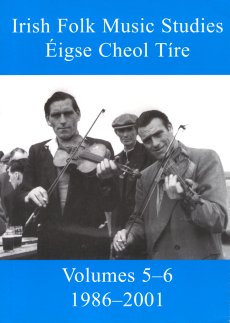 It appears to be a substantial book, but the paper is fairly heavyweight stuff and the book's 15mm thickness resolves into only 175 pages.

More than one third of the book is taken up by a bibliography and discography of 'recent' publications.  In each case, minimal information is given - title, authors/editors/performers, publishers, catalogue number, number of pages, year published, etc.  423 books and periodicals are listed, and 558 records.  The remainder includes five articles (the longest of which is 18 pages), thirteen book reviews and 35 record reviews.  Most of these reviews are of multiple publications, and none, as far as I can see, is longer than three pages.

One is forced to wonder exactly what criteria are used to select the publications for review.  They must be pretty stringent if there have been fewer than one book and just over two records per year considered suitable for inclusion in the last 15 years!  In comparison, MT has reviewed 155 similar publications in just over five years.  The same sense of astonishment is aroused by the fact that only five articles of suitable calibre appear to have emerged since 1985.

All the articles and the majority of the reviews are in English.  As far as I can see, only the reviews of recordings of sean-nós sung in Irish have actually been written in Irish - some 4 or 5 in total.  Six tunes or songs appear in staff notation and there are six photographs, including those on the front and back covers.

The book's editors - Hugh Shields, Nicholas Carolan and Thérčse Smith - have each written one of the articles; the other two are by Michael Tubridy and John Moulden.  Those by the latter and Thérčse Smith I found the most interesting.

John Moulden's article concerns his (successful) attempts at finding a traditional song about a female soldier or sailor which is verifiably about a real person and event.  There are many such songs, and many accounts in newspapers, letters, diaries, etc of similar escapades - but, until now, no evidence of a true conjunction between the two.  John demonstrates that the true story of Ann Jane Thornton, as published in numerous English and Irish newspapers in 1835 had been taken into the oral tradition and had emerged in versions of Ann Jane Thornton sung by Eddie and Robert Butcher, of Magilliagan, Co Derry, to Hugh Shields in 1961.

As well as being a good old-fashioned detective story, John goes on to show how, while in the 17th and 18th centuries, stories and songs of girls in sailor's clothes showed them as worthy exemplars of female courage, endurance, etc, the 19th century saw the spread of the ethos of 'female delicacy' to the lower classes, and that press accounts of such exploits hold up Ann Jane Thornton and her like as ridiculous.  He then brings in Dianne Dugaw's thesis (from her book Warrior Women and Popular Balladry 1650-1850) that 'all social reform is social control in disguise' and draws the entire discussion to an admirably coherent conclusion.  This is first-rate stuff.

Thérčse Smith' article on The Study of Oral Traditions in Music is far more academic, but is, potentially, equally interesting.  Unfortunately though, it seems to be addressed toward readers having a wholly conventional musical education and who know music only as staff notation - this is particularly true of its first half.  Since the contributions are not dated, it's not clear when Ms Smith's piece was written; it could have been as long as sixteen years ago.  Most readers in the 21st century will be very well aware of issues she spends almost half of her 9 pages discussing.  Nonetheless, it is well worth reading, particularly its latter half.

I'm afraid the other three contributions were far less interesting - at least, to this reader.  Hugh Shields' piece is a likeable account of his collecting work in the late-fifties and early sixties, when pencil and notepad were the recording instruments.  He then goes on to compare and contrast this medium with the modern electronic one.  There's not a huge amount of meat in his 16 pages.

Nicholas Carolan gives us 12 pages on Philip O'Sullivan Beare on Irish Music.  It appears that this 17th century Irish Catholic historian wrote two works, one of which was never published and was lost sight of for nearly two hundred years until it was rediscovered in 1929.  His comments on Irish music and musicians, many published here for the first time, must be seen as important, given the paucity of such early sources - but, to be honest, he tells us very little of any detail.  Indeed, much of his writing is merely a refutation of what Giraldus Cambrensis (1146-1223) wrote about Ireland, and consists mainly of abuse.

Michael Tubridy contributes a piece about his Memories of Dancing in West Clare and Beyond.  This is a revised version of the text of Michael's contribution to a seminar on Irish dancing - in which context it was spoken extempore and illustrated by recordings.  As such, I'm sure it would have been excellent.  Unfortunately, it doesn't transfer to cold type very well.

The book (and the Cumann Cheol Tíre Éireann?) is funded by the Irish Arts Council.  As a product of sixteen years work, one has to draw the conclusion that this organisation is a little more openhanded and forgiving than its English counterpart.

The book is available from the Irish Traditional Music Archive, 63 Merrion Square, Dublin 2, Ireland, E-mail: sales@itma.ie  or from their Website (www.itma.ie) priced at €12 + €2 Irish p&p, or €4.5 Europe p&p.