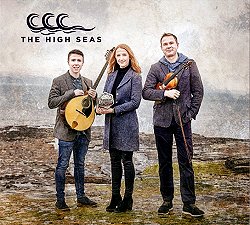 Husband and wife, Ciaran O'Maonaigh and Caitlin Nic Gabhainn are well known to Irish music listeners.  Ciaran is part of the greater O'Maonaigh clan from Gaobh Dobhair (Gweedore) in Donegal and Caitlin is one of Antoin McGabhainn's musical daughters.  They have already quite a collection of recordings on offer, individually and collectively.  Ciaran released a solo set of Donegal fiddle music in 2004 just after he'd won the Ceoltoir Og award at the annual TG4 Gradam Cheoil awards.  Caitlin released her solo CD in 2012.  Since then they released a recording of duets in 2015.  For this CD, they've teamed up with young singer and bouzouki player Cathal O'Currain to form the High Seas.  The addition of a singer rounds the group out to offer a very attractive variety of tunes and songs in English and as gaeilge.

There are five songs, mostly in Irish, beautifully sung by youngster Cathal, and half a dozen varied tune sets.  The three instruments: concertina, fiddle and bouzouki are interwoven intelligently to provide lift and mood to both tunes and songs.  They manage to enhance their highly accomplished tune playing with complex melodic harmonies and accompaniment, but they still let the tunes breathe.  They are showing off the music, not just their own skills.  They have applied a great deal of thought in constructing the intricate arrangements, although Ciaran lets his fancy wonder on some of his harmonies to ensure there is still some spontaneity in the playing.  The arrangements are restricted, for the most part, to melodic rather than the currently fashionable rhythmic variations.  Perhaps because of their thorough grounding in, and ear for, the tradition, they manage to avoid sounding contrived.  Only on the Drunken Landlady set do you get the feeling they have pushed the ornamentation and arrangement, and they almost overpower the tune, but generally they have the confidence in their skill to play simply and well.

Cathal's singing is accurate and expressive, a delight to listen to.  His confidence and maturity belies his youth.  Some of the song arrangements are harmonically reminiscent of Andy Irvine or Planxty.  The choice of songs is varied from the sean-nos ballad an Caílin Rua to the more modern celebration of music and song The Road to Donegal.

Donegal tunes which featured strongly on Ciaran's solo recording are here limited to a couple of selections, including a rousing fiddle solo on the strathspey and reels selection.  The majority of the tunes on offer are standard session tunes; but there is always a challenge in making well known tunes sound fresh and the trio manage that with ease.  Caitlin's step dancing adds a rhythmic accompaniment that outshines many a bodhran player.  Two more recent compositions, one from Caitlin and the other, written by Cork flute player Conal O'Grada, book end the tune selections.

The balance of instruments and voice is well served by the recording and final mix.  There's a brief but informative set of notes and the words for all the songs provided in the little booklet.

This highly talented trio enjoy a great musical heritage through their families and home places and play with respect to the traditions they have inherited but add skilful arrangement and variations to make this CD a great listen.

This recording is available from the group's bandcamp website https://caitlinciaran.bandcamp.com/album/the-high-seas or from the ever excellent Custy's http://www.custysmusic.com/index.php, and with this CD from the new line up they should attract a lot of attention for clubs and festivals.