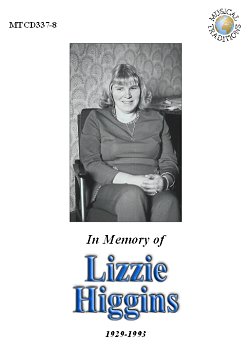 This double CD is a long-awaited tribute - a comprehensive, sympathetic and affectionate representation of the place that Lizzie Higgins holds in the annals of Scottish traditional song and story.

The accompanying booklet, with copious notes and background to Lizzie's own life and repertoire, is a fund of information on both singer and songs.  The gathering-in of available recordings has no doubt been a labour of love and the end product does all concerned supreme credit.  Congratulations and plaudits in abundance must go to Rod, Danny, Ian and others for the sheer determination and concentrated effort put into this project.  My personal request would be to grant Danny an Honorary Degree in Doric for her transcription of the texts, aided and supervised by young Doctor Olson!

The selection of the tracks to be used must have been tricky - nevertheless the cross-section of Lizzie's repertoire included is more than satisfactory and sums up her own preferences very well.  Although there is a fair time span between the earliest and latest recordings, it is an interesting exercise to try and work out the 'undated' recordings.  It is clear that Lizzie 'grew' in stature : you can sense an assured, much stronger delivery : variations in her phrasing : an appropriate slowing down as she comes to terms with her own interpretations and explanations to her audience, I have strongly recommended to many current students on the academic / degree courses that are all the rage at present , that they buy the CDs and study Lizzie's techniques and discover her personal magic.  The titles hold within them a balanced array of really good songs and stories that embrace all the aspects of the human experience - albeit from a long-gone era, the human situation does not alter and the situations ring true even today.

I put on one of the CDs and experience an evening of Lizzie at a folk club or concert and remember fondly her huge presence and authority and it is a joy.  The only thing missing would be Lizzie's inimitable and memorable introductions.  For this and much more I am indebted to Musical Traditions Records.

Finally, I would like to offer my 'take' on the mystery of the 'swarrocks' that appear in the third verse of MacCrimmon's Lament (CD2-6).  Do you remember ever playing a communal game called 'Chinese Whispers'?  A message or statement is passed along, in a whisper, from one person to the next in line, then the next and down the line to the final person.  (Apparently, this was done during the war in the trenches - a wee bit before my time.) The original message had changed by the time it reached the last person in line.  Much hilarity usually ensued!  Some of you may recall the old chestnut - “Send reinforcements we're going to Advance” which ended up as “Send three-and-fourpence we're going to a dance!”  Also, the fine Fife singer, Irene Riggs went into a record store in Kirkcaldy and asked “Do you have any Archie Fisher records?” to which the assistant replied, “Artificial records?  No, we only sell real ones!”

This leads me on to the reason for this preamble - what has been said has been misheard.  Bear in mind that the piper in question was in the employ of MacLeod of Harris and Dunvegan.  Let's take a look at the verse previously referred to:

The cloud-weathered flags from the grey castle sallies,
The oars are unseated, unmoored are the galleys:
Clean swarrocks and broadsword, clan target and quiver,
For him that shall never return, MacCrimmon.

Think of this verse as setting the scene for a battle - the theatre of war.  'The cloud-weathered flags' I suggest should read 'MacLeod's whithered flag'  It could perhaps be 'weathered' i.e. torn by the wind, but I feel that 'whithered', meaning 'fluttering' is more appropriate in this case.

The second line seems fine.  The ships are launched in preparation for battle.

I'm listening to the CDs yet again and can hear some familiar voices joining in the choruses.  Nice one.