The welcome appearance of this album answers several of the questions raised in my earlier review of the Hidden Fermanagh book and accompanying CD. 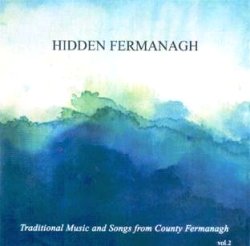 For here listeners will find Gabriel McArdle singing Bessie the Beauty of Rossinure Hill, Brenda McCann playing The Humours of Swanlinbar and Catherine Dunne’s rendition of Hand Me Down the Tacklings.

Like its predecessor, however, this may again disappoint those hoping to hear archive recordings of Mick Hoy and Eddie Duffy.  However, unlike its antecedent, this second album has a far more cohesive feel.

Firstly, there are five great songs, including not just the aforementioned McArdle’s Bessie, but a splendid The Town of Swanlinbar and a thoroughly evocative rendition of Erin the Green.  Those who relished his rollicking duet with brother Mickey on the previous album’s Ballyconnell Fair will also fully appreciate a similar outing on their father’s somewhat scurrilous The Second Hand Trousers I Bought in Belcoo.

Thankfully, all of the above are sung unaccompanied, as is the album’s crowning glory, a deeply redolent reading of Green-Robed Inisfail from Rosie Stewart in no-pulling-the punches mode.

Something also seems to have happened to the musical arrangements between volumes one and two of Hidden Fermanagh.  The barrages of accompanists have almost entirely disappeared, although some listeners may take umbrage at guitarist Ian Smith’s introduction to Hetty’s Wishes which suggests that Stephane Grappelli is about to sally forth.

So, for instance, the trio of accordionist Jim McGrath, Gabriel McArdle on concertina and fiddler Séamus Quinn (albeit adding double-tracked piano) are allowed two outings - the first on a set of reels from Mick Hoy’s repertoire and the second being jigs from Eddie Duffy’s cache of tunes - and rumbustious they are too!

Tunes from The Gunn Book are again present and more’s the pleasure in hearing the fiddles of John and Pat McManus combining with John Joe Maguire’s flute on Lady Montgomery and The Loon Lasses, a thoroughly foot-tapping pair of reels.

Again, purchasers of this new album will need the Hidden Fermanagh book to learn more about the material contained here, and, if you have not acquired a copy already, then www.fermanaghmusic.com is the place to visit.  The rest of us can delight in the experience of winning back the trousers we lost in Belcoo!