Tunes, songs and poems from Norfolk and Suffolk 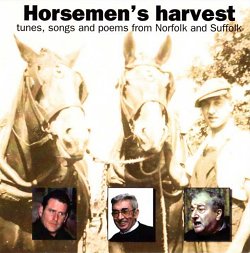 I feel very privileged to live in an area so rich in traditional music, so much of which has been recorded and released by such labels as Topic, Veteran and Musical Traditions, that it is particularly pleasing to state that a good deal of this music making continues today, even if to nowhere near the extent as in years past.  I have to admit that I know all three performers on this new recording quite well, and, as such I am probably not the most impartial person to review the disc, but anyway, here goes …

What we have here is a private release made up of recordings made this year of three horsemen from the Norfolk/Suffolk border area along the River Waveney, consisting of songs, monologues, a poem and a tune medley from Ray Hubbard, songs and step dancing from Lenny Whiting and songs and melodeon tunes from Steve Matthews.

Ray Hubbard from Dickleburgh in Norfolk is widely regarded as the county's last traditional working horseman, working on the same farm for a Mr Saunders for much of his life.  He is also a seasoned performer, with years as a member of a local concert party, church organist and pub musician, and was the subject of a full CD of his music released by John Howson earlier this year - Norfolk Bred; Veteran VT155CD.  Here we have several comic songs such as Joe the Carrier's Lad and Sarah, all delivered in Ray's rich local dialect (although the fact that several were composed songs from the early and mid Twentieth Century and widespread in currency, does perhaps explain the incongruous use of “us” for “we” and “I” for “me” in many lines, which is unheard of in East Anglian dialect and sounds rather strange amongst the rest.)  The songs are all humorous and testament to Ray's well practised comic delivery, as is the monologue You Can't Tell 'em Nothing, They Know, a live performance of which is guaranteed to bring the house down at any local event.  As for the rest, Ray gives us a poem about the sad demise of a horse called Bunny Beales and rounds off the CD with a medley of melodeon tunes.  There's also a short soundbite of Ray talking of his time starting with horses, which reflects well the whole premise of the recording, and is good to hear.

The same is true of Lenny Whiting, retired horseman of Stradbroke, Suffolk, who tells us of his life with horses in a short extract.  He also contributes four songs, which it is wonderful to see included, as he will no longer sing in public - two traditional songs, The Northern Soldier (a version of The Outlandish Knight) and Farmer from Cheshire, and two popular ones from another age, Mother's Love and Bunch of Violets Blue.  A typical selection of the sort of songs performed in pubs across the area years ago, and learned from his father and grandfather.  These days Lenny is well known for his step dancing, and what stepping!  Here we have him stepping to a sprightly Oh Joe, the Boat is Going Over - a favourite tune of his for dancing to - and the ubiquitous Pigeon on the Gate, the most popular step dancing tune of the area, either with that name or as the Yarmouth Hornpipe.  Step dancing really has to be seen, of course, but a listen through these two short tracks will give a good indication of Lenny's skill as a step dancer.

Steve Matthews of Brome, Suffolk, is a generation younger than the other two performers.  As well as providing the music for the step dancing, he gives us a selection of waltzes, polkas, hornpipes and jigs with brisk, accomplished melodeon playing, including two medleys, one of hornpipes and one of polkas, moving fairly quickly from one tune to the next, as was the wont of several local players - George Craske and Percy Brown come to mind in this respect.  He learned a lot of tunes playing with Font Whatling and Ted Pask locally and most tunes are common in the area, such as The Foggy Dew, Waltz for the Veleta, Oh Joe, the Boat is Going Over and the version of Off She Goes with the crooked B music, as played by Walter Bulwer, although there are a couple which have crept in from elsewhere - Gloucestershire Hornpipe and Harry Gidley's Waltz.  As well as the tunes, Steve sings the unusual Private Trooper, which he learned from his grandmother and which seems to be set in the Crimean War, and Strolling Down to Happisburgh.

So what we have here is over 66 minutes of the sort of robust social music which was once commonplace in pubs and village halls of East Anglia, from three of the area's most renowned performers who still sing, play and dance this music regularly today.  The sound quality of the disc is generally very good, although uneven in places.  There is some hiss in a couple of the Ray Hubbard tracks and the recordings of Lenny Whiting's songs sound harsher in quality than the rest, but to those who are in any way used to field recordings and their inconsistences, this should prevent few problems as far as listening is concerned.  With so many recordings of East Anglian traditional music being released, such as the recent CDs of Keith Summers' 1970s material on Veteran (Good Hearted Fellows VT154CD) and Musical Traditions (A Story to Tell MTCD339-0), it's heartening to see this type of music making continuing.  There are in fact several connections with the aforementioned discs, as Ray Hubbard played regularly with Ted Laurence, Steve Matthews played regularly with Font Whatling and Lenny is Charlie Whiting's brother.  As such, this new recording represents a welcome addition to the impressive amount of releases available of the traditional music of East Anglia.