songs, tunes and stepdances from the Sam Steele collection

Sam Steele was a teacher who lived in Cambridgeshire in the 1950s.  He was a friend of the morris dancer Dr Russell Wortley, and it may have been Wortley who first suggested that Steele should look for songs and dance music in the Cambridgeshire fen country. 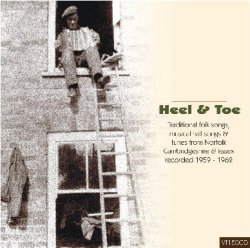 To be honest, this is a guess on my part because, sadly, we are told very little about Sam Steele in the booklet notes to this fascinating CD.  I am sure that this is not the fault of John Howson, who lovingly compiled and nurtured this compilation into its present form.  Rather, it may be that, in this case, we really do not know all that much about the collector.  Steele also recorded in parts of Essex and Norfolk and I would love to see a complete listing of all the titles that he collected.  There seem to be a large number of students studying folklore these days.  Perhaps one could be persuaded to have a look at Sam Steele and his collection.

The album comes with a warning, 'These are amateur recordings made on a non-professional machine and unfortunately it was often switched off as soon as a song or tune had finished, clipping the last words or notes.  The recording locations were not always ideal and sometimes the microphone was not as near to the performers as it should have been.  On top of this, some of the audience members were suffering with bouts of coughing!'  We are also told that, in some cases, the original tapes had deteriorated with age and also that the tapes contained a great deal of 'hum' - some of which was removed before the material was transferred to CD.  So, having read all this bad news, it came as a pleasant surprise to find that the recordings heard on this CD actually sound quite good.  Congratulations are in order to John Howson and Charlie Crump.

We can, I suppose, divide these recordings into two parts - instrumental music and songs.  We now have quite a good idea about the East Anglian musical tradition, thanks to collectors such as John Howson, Keith Summers and many others.

Howson's two double cassettes (The Pigeon on the Gate - melodeon players from East Anglia VTVS 05/06 and I Thought I was the Only One - dulcimer players from England VTVS 07/08) together with the recently issued Billy Bennington CD (The Barford Angel - Norfolk dulcimer and dialect VT152CD) already give us a good idea about what was going on, and, with Keith Summers' recordings shortly to be issued on a number of CDs, we really will be in a position to enjoy and understand the music from this region.  And then, of course, there is the Topic CD English Country Music TSCD607, which contains even more superb material.  All this, of course, means that some of the tunes heard here will already be well-known to most listeners.  Tunes such as Heel & Toe Polka, The Bluebell Polka, The Yarmouth Hornpipe, The Sailor's Hornpipe, Whistling Rufus and Dulcie Bell can be found all over the place, although it must be said that the performances heard here are often very good indeed.  Percy Brown's Heel & Toe Polka, for example, is the well-known Jimmy Shand tune, though here played beautifully in a style that is the antithesis to Shand's carefully defined (and, dare we say, occasionally dull) delivery.  Percy really was a fine musician and the final track, where he accompanies step-dancer Dick Hewitt, is just about as good as it gets.

On the other hand, there are a couple of 'new' tunes, an unidentified, and lively, polka and an unidentified jig, which, as John Howson notes, sounds as though it could once have served as a quadrille.  George Green's two tunes are especially interesting, as Green (1895-1975) was the melodeon-player for the Little Downham Molly Dancers.  Green's Four Hand Reel, played with great verve, is little more than the first part of the tune and, as such, is seldom heard today.  Likewise, the version of The College Hornpipe which is, again, well-played.

Then there are the songs, ten in all, sung by five singers.  First off is Reg Bacon, a sixty-eight year old singer from Essex who gives us four splendid songs.  What I find especially interesting is the fact that in each song we find the words being sung to tunes that differ from those usually associated with the pieces.  The Banks of the Sweet Dundee is sung to the tune that normally goes with the song The Handsome Cabin Boy.  Both John Barleycorn and The Barley Mow are sung to tunes that are both new to me (the tune for The Barley Mow being especially fine) and even the relatively recent Music Hall song Nothing to do with Me is carried on a tune that differs significantly from that used by other English singers.

Arthur 'Hockey' Feltwell was a fenman from Southery, Norfolk.  (Though I do wonder if his ancestors originally came from Feltwell Fen.) Here he sings versions of two ballads, The Outlandish Knight and Lamkin.  There is also a recording of him singing the song Four Horses on the Topic CD Come All My lads that Follow the Plough (TSCD655) and that, sadly, is all that we have of him at the moment.  Are there any other recordings in the Sam Steele collection?  I hope so, because Hockey was another of those great performers whose reputation should not rest on only a few minutes worth of tape.  Hockey's versions of the two ballads are excellent and should be heard by all would-be ballad singers.  The texts to both pieces can be found on the Veteran web-site (in fact, the texts to all the songs can be found there) and I find myself at odds with a couple of things given there for The Outlandish Knight.  In verse two we find the lines:

He said, "Fetch me some of your father's gold,
Some of your mother's freeze (food?).

Surely freeze is a mishearing of the more usual fee(s) that many other singers use; while the term 'a nether', as in:

Now he jumped on a white milk horse.
She on a nether (dapple?) grey.

could just be a local pronunciation for the word 'another'.  Whatever, the words are sung to a fine tune, one akin to that used for the song The Bold Fisherman, and it is interesting to compare Harkey's version with that sung by Jumbo Brightwell of nearby Suffolk (Veteran VT140CD).  Lamkin, a bit of a rarity these days, contains quite a full text and, yet again, has a splendid tune.

The final four songs are all from the days of the Music Hall.  Billy Rash's Banks of the Clyde is still heard being sung today and must at one time have been an extremely popular song.  (The booklet's picture of Billy Rash in drag has to be seen to be believed! The resemblance to Captain Mainwairing, of Dad's Army fame, is uncanny.) So Was I, sung by Charley Giddings, is from the same period and was composed by Arthur Lennard.  But The Bank of England and Remember Me To… are complete unknowns, songs without any trace in Steve Roud's Index.  Alan Pate accompanies himself on the piano on Remember Me To… which, with its spoken passages, does sound as though it could have picked it up from an early 78 or cylinder recording.  It's a lovely song and I'm sure that others will soon be singing it.

Many years ago I came across the fenland stories of W H Barrett (Tales from the Fens and More Tales from the Fens, 1963 & 1964).  I loved, and still love, the stories found in these books.  Heel & Toe comprises recordings from the sort of people who told their stories to W H Barrett at the beginning of the 20th century.  It's a great collection, one full of splendid songs and tunes that are well-sung and well-played.  I know that there are now quite a number of similar CDs on the market, but this really is one that should be bought by anyone with the slightest interest in English traditional music and song.