It's many moons since Cathal Hayden released his debut album, Handed Down, and, in the intervening years, the fiddler and banjo player made a name for himself with the band Four Men and a Dog.  Cathal hails from Pomeroy, a rather isolated, upland plantation village in County Tyrone, but also one with a strong musical tradition. 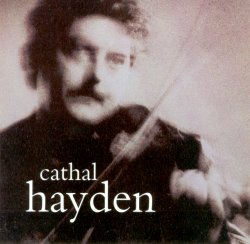 Alan Feldman went to Pomeroy to interview the late blind fiddler John Loughran for his book The Northern Fiddler (and, boy, did Loughran take the mickey out of him!) and Cathal's father was also a locally renowned fiddler and banjo player.

The story goes that father and son Hayden were paying a visit to Brian McGrath's family's pub at Brookeborough in neighbouring Fermanagh, a notable music venue, when the Antrim fiddle-maker Jim McKillop popped in with a few of his instruments.  One was promptly purchased for Cathal, who was already highly proficient on the banjo, and he went on to become All-Ireland Champion on both instruments.

was produced by Arty McGlynn, and the Tyrone guitarist resumed the controls seventeen years later for Cathal's self-titled second album.  Also featured are Brian McGrath and Rod McVey on keyboards, Liam Bradley on assorted percussion and Sliabh Notes' accordionist Dónal Murphy (who played in an early incarnation of Four Men and a Dog) appears on one track.  So does the Kerry accordionist, Séamus Begley, who provides vocals for the album's only song, The Mountains of Pomeroy, which oddly does not feature Cathal himself.  Anyone who knows the area around Pomeroy might be puzzled by a reference to its mountains.  It's certainly hilly, so we can allow the song's author, one Dr Sigerson, a degree of poetic licence since the impact of the following lines would be diminished by more accurate topography:

"Beware", they say, "of Renardine
On the mountains of Pomeroy."

Unfortunately, as Séamus recounts, the song's heroine does meet Renardine, and her doom.

But back to Cathal.  The broadcaster Tony McAuley's sleevenotes conclude with the statement that this CD is "one of the finest collections of traditional fiddle music I've ever heard" and he is absolutely correct - albeit that there's a fair bit of banjo flying around here too.  'Flying' is an appropriate word to describe Cathal's playing and he sets out his stall right away with a glorious opener, the reels Goodbye to Ireland and McKillop's.  The following set (The Boys of Ballisodare / Unknown / Lord McDonald's) is even better as Cathal exhibits that lightness of touch, the soars and swoops and delicate little harmonies which characterise his playing.  He's as fast as greased lightning too, but there's never a sense of him about to lose either control or the thread he's playing.

The banjo features on the next four tracks, but only on one of these, John Carty's Seanamach Tubestation, does Cathal accompany himself (thanks to double-tracking).  The best of these highlights a couple of sprightly reels, Splendid Isolation and Mrs Lawrie's, penned by the Armagh fiddler long resident in London, Brendan McGlinchey (now, when is he going to record again?).

The album's accompaniment verges on perfection and none better than on the seventh track, Master McDermot's / The Tailor's Fancy, where McGrath's piano work is the epitome of understatement, allowing Hayden to set sail on yet another voyage of discovery.  Next follows a wondrous, literally low-key rendition in B flat of Liz Carroll's with yet more spirited banjo entering for the second half.

Dónal Murphy emerges after The Mountains of Pomeroy interlude for a set of lively Kerry slides while the album's only hornpipe, The Homeruler, provides a welcome diversion.  While much of the album demonstrates Cathal's nose for some fine lesser-known tunes, the last two tracks include a couple of rather more familiar ones, the reels Paddy Cronin's and Seán Ryan's.  The latter reveals Cathal's fiddle at its most mellifluous singing best, a tune that you can almost see swaggering down the road, fully content after a couple of grand pints.  And that's exactly how the listener should feel on hearing this truly marvellous album.