Vol 1 - the music of Cry Havoc

This CD, just sent in, would not normally be reviewed in MT as it contains the music of a revivalist Morris side - Cry Havoc, from Botley, a suburb of Oxford.  However, there are elements of its presentation and, particularly, its part in The English Folk Dance Project which make it appropriate to discuss it here. 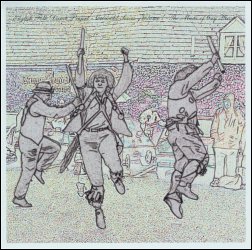 The CD itself is unobjectionable, if exceedingly dull.  The four Bampton tunes included (the only ones I'm competent to comment on) are different from the versions Bampton use and would be uncomfortable for them to dance to - but that, of course, is not unreasonable; this is not a CD of music for Bampton.  I am puzzled, though, as to exactly who they would be useful to - Cry Havoc's fans and mums and dads might be the whole market, since I assume that no revivalist side would wish to emulate another one.

However, the record company, Little Acorn (which describes itself as 'award winning' without detailing the 'award'), clearly has far more grandiose plans.  The CD was accompanied by no fewer than seven promo or information sheets, including a two-page 'Launch Statement' for The English Folk Dance Project by its Director, Steve Douglas.  A prťcis of this also appears in the CD's booklet, in which we learn that Steve is also Little Acorn Records.  The Project's quite extraordinary aim is to produce a 'definitive collection of folk dance music from all parts of the country ... starting with the Cotswolds and then moving out to other regions ... a comprehensive reference work of English folk dance music in the early part of the 21st century'  Blimey!  The Cotswolds Series, of which this is Volume one, will comprise 'five CDs and a CD-ROM of audio visual material - to be issued over a period of two years'.  Each CD will have 'an exhaustive booklet putting the music into a historical, folkloric and geographical context' and the whole project will be 'essential both for the academic and the fan of English folk music'.  You see why I used the word grandiose!

So let's look at how well the first volume matches these claims.  The production is all a bit hit-and-miss: punctuation, grammar and spelling are inconsistent; at least two very different designers appear to have been responsible for the artwork; a glossy form allows you to order all five CDs but not the remaining four, and no mention is made of the CD-ROM; the 'Resources' quoted include Bacon and Sharp (but not Dommett or Chandler) and such unimpeachable sources as Morris On, Son of Morris On, Plain Capers, Mally's Cotswold Morris Book and Mudcat Cafť.

The EFDSS' Music of William Kimber is also listed - not, I think, for its generally excellent booklet by Derek Schofield, but possibly as an inspiration for the packaging concept.  For here we find, once again, that a normally unnecessary slipcase is required to contain the CD's jewel case and a booklet which is too big to go in its usual place inside.  This is not because it is so 'exhaustive' that it's too thick to fit ... no - merely that it has been made the same size as the jewel case's external dimensions!

Indeed, 'exhaustive' is not a term I'd apply to a booklet having just eight pages of text and two of photos.  Actually there are other photos too - they appear as those awful graphic backgrounds to seven of the eight text pages (I don't know why anyone uses this treatment) making them very difficult to read.  The first page tells us a little about the Cry Havoc side and provides the track listing (repeated on the CD's back cover).  The writing is insultingly simplistic - for example, when a new tune, The Dogs of War, is mentioned the writer feels the need to give us the full quotation, just in case we were not able to see the connection with the side's name, but does not cite its Shakespearean provenance.  Page 2 contains the prťcis of the 'Launch Statement' and other asides from Steve Douglas.  It seems that he was given these present recordings by 'Ed' and immediately 'realized that we had the start of a collection.  All we needed was a bigger 'grand plan' to pull together all the different aspects of Morris ...'  Bags of rigorous planning and structure there, then!  I begin to see why the further four CD volumes in the Series, not to mention the 'other regions' of the Project, all remain shrouded in mystery at present.

Two pages of History follow, and as they have been compiled 'from notes and references kindly supplied by Mike Heaney' (editor of The Folk Music Journal), they are accurate - if exceedingly brief.  It is a great pity that the two pages on 'Folklore' which follow were not derived from a source of equal quality.  These, by one Richard Freeman, contain the worst collection of Heritage Market nonsense, New-Age romantic fakelore, and allusions to mysterious 'ancientness' it has ever been my misfortune to encounter - far worse than the Saydisc/Kennedy archetypes.  On the preceding page we were told that the earliest documented mention of the Morris in England was in 1477 - here Freeman tells us that it 'has a history that stretches back thousands of years'!

The remaining two pages of Track Notes seem to have been extracted mainly from the sleevenotes to the 'seminal' LPs mentioned above, and at three lines (maximum) each, they tell us almost nothing of much interest or use.  The advertised 'geographical context' element of the booklet appears to be entirely missing in this case - we're not even told where or what the Cotswolds are, nor why a good number of the villages mentioned as origins for the tunes do not lie in the Cotswold Hills.

So this is a sample of a project which is supposed to be 'essential ... for the academic'.  Do me a favour!  I once saw a copy of a glossy publication called Traditions Magazine, or some such name - and this present offering manages to duplicate its combination of serious tone, Tabloid sensationalism, and lack of real knowledge.  I seriously doubt whether even the least committed of MT readers would find it remotely satisfying.  And just in case any do, take note of my reservations regarding the apparent lack of planning for the rest of the series.  I certainly wouldn't order and pay for all five at this juncture.