Carols from Padstow in Cornwall

CD by Doc Rowe - No number

For a community to be favoured with a cultural tradition as distinctive and spectacular as Padstow's May Day Obby Oss is cause for celebration, but for it to boast other traditions equally delightful, as is the case with the local carolling captured on this CD, is truly remarkable.  But we should not be so surprised, for it is often those communities that value and honour their vernacular heritage in one respect that have most to offer in others.  (I am reminded of Bampton in Oxfordshire and Castleton in Derbyshire.)  Nor is it unexpected that behind the continued vitality of such a tradition is a matriarchal or patriarchal figure.  In this case the guardianship is held by an indomitable octogenarian, Molly Pinch.  Her enthusiasm, warmth, and infectious good humour shines through in this recording.

My first encounter with Padstow carolling dates from May Day 1971 when I interviewed the leading member of the group at that time, Johnny Worden, who kindly gave me a copy of his newly published collection of local carols, Strike Sound (Lodenek Press).  But it was not until Doc Rowe's tape, Rouse, Rouse released by Veteran in 1988 that I heard the carols being sung.  Now some of these recordings and others previously unreleased have been made available on this CD. 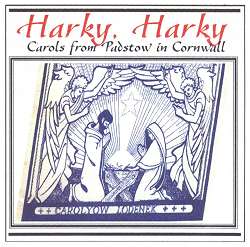 They are field recordings of good quality and great interest, some recorded indoors and some outside, some in private houses and some in pubs, some in benign weather conditions and some in pouring rain.  Regrettably the somewhat sparse notes do not reveal the dates (or detail all the venues) of the recordings.  However, it should be remembered that the CD was privately released by Doc to mark the visit of the Padstow Carol Singers to Sheffield for the Millennium Festival of Village Carols and that money from the sale has generously supported the expense of the visit and benefited the Festival.

Eleven carols are included on the recording and over half of them appear in more than one rendition, which enables the listener to sample the ambience of the different contexts in which the carols were sung and their contrasting acoustics.  Hence we may sense the singing of thirty or more carollers on one track, while on another we are only aware of a handful.  The advantage of these 'close-ups' is that we can pick out individuals singing their parts, especially the rolling bass line.  If there is a downside, it is that the sound is imbalanced and not tout ensemble.  But then, as Molly would stress, they are emphatically not a choir.  They hold no auditions or rehearsals nor is there a formalised membership or connection with any institution; they only exist, by custom and tradition, to sing the local carols and through their performance of them.  True they sing in four conventional parts and since 1971 they have had the music of the carols available to them in staff notation, but essentially theirs is an orally transmitted and aurally learnt tradition.  This is apparent in their characterful performance and the dynamic unity of the singers, who know instinctively just when to pause or hold a note and when to forge ahead.

While Padstow's carols are unique to their village in performance and version, they are part of a countrywide tradition of local carol singing that is not only found in the West Country but in other parts, notably the South Pennines.  Hence Padstow's glorious Shepherds Rejoice is sung in Hartland in Devon, set to a different tune, whereas their exquisite Lo! the Eastern Sages Rise shares both text and tune with a North-East Derbyshire version of the carol from Coal Aston.  Such carols have a long and colourful history, having commenced their career among parish choirs and nonconformist communities in the late eighteenth/early nineteenth century.  For instance, the words of Lo! the Eastern Sages Rise were written by Jehoiada Brewer, a Congregational (Independent) minister at Queen Street Congregational Church, Sheffield and Carrs Lane Congregational Chapel, Birmingham; and set to a tune by Samuel Stanley of Birmingham.

By the middle of the nineteenth century such tunes had fallen out of favour with the established church, but were kept and nurtured by rural-based carol singers, who recognised and valued their merits.  Another stunning example of this type of carol is Zadoc, the tune of which bears the characteristic hallmark of a fuguing section (overlapping parts sung in counterpoint).  In North America it is known as New Jerusalem and attributed to Jeremiah Ingalls of Massachusetts.  Clearly such music was not a parochial matter.  The words for Zadoc are the ubiquitous While Shepherds Watched, which date from 1700 and were written by the Poet Laureate, Nahum Tate.  This common metre text (alternate stresses of 4,3,4,3) was in fact the only carol permitted to be sung in Anglican churches for over a century.  On the CD insert, Doc has muddled up Zadoc with another fuguer, Lyngham, which is Padstow's other setting for While Shepherds Watched.  The confusion is found in tracks 12, 15, and 18.  Padstow carollers also sing another carol in more than one setting, Angels from the Realms of Glory, though none are included on the CD.

Alongside this older repertory of fuguing carols (see also Behold the Grace, sung to Ilkla Moor - Thomas Clark's Cranbrook), there are several tunes which are redolent of the evangelical revivalist tradition that gained great favour among nonconformist communities in the latter part of the nineteenth century.  Both Rouse Rouse and Harky Harky incorporate jubilant 'Hallelujah' choruses, as does Mountains, which began life in Edinburgh as an anthem.  Jesse has an equally ecstatic chorus - 'clap your hands for joy, ye people!' and 'shout Hosannah!'.  This nineteenth-century hymn-singing revival was energised by the visits of two Americans, Dwight Moody and Ira Sankey, whose mark is still to be found in many communities, most notably fishing villages in Cornwall, Yorkshire, and North-East Scotland.

The Padstow tradition is not a sedentary or stationary affair but perambulatory and busy, seeking out every appropriate location within the town to perform, trying to ensure that no-one has missed their Christmas message.  Even the Padstownian diaspora is included via a telephone link-up.  On their Christmas Eve tour the carollers visit the grand manor house at the top of the town, Prideaux Place.  Tracks 3-7 were recorded at this location and the resonance of the singing reflects the significance of the context in its clarity and presence.

Singing unaccompanied (a capella) in many varied contexts requires a true and reliable pitch.  Formerly this would have been achieved by means of a tuning fork, hence the Padstow exhortation: 'Strike sound!'.  The singers currently rely on a pitch pipe (harmonica reeds) and an aide memoire that identifies the appropriate key for each carol.  The listener will also be aware of the rich Cornish accent of their leader; Molly Pinch's constant encouragement and experience ensures that the tradition is upheld and kept in good heart.

The Padstow Carollers are as fine a group of carol singers as one could hope to encounter around any English village or town and their carols are a delight.  This CD not only captures the richness and variety of their repertoire but the full vigour of their performance.  Undoubtedly a collector's item, the CD is well worth seeking out.