Songs, ballads and a story from the School of Scottish Studies Archives

Following the death of Hamish Henderson, the greatest of modern Scottish collectors, in 2002, here is one of what will undoubtedly be very many memorials to the man.  It is, in effect, a sampler of his work between 1952 and 1958. 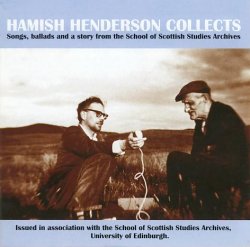 It was his great good fortune to meet first Seamus Ennis in 1946 whilst Ennis was collecting Gaelic folklore, and then Alan Lomax in 1951.  He took Lomax to the North-East of Scotland where they met and recorded many singers.  Following this work, Henderson was offered a contract by the School of Scottish Studies as a field worker.  Mike Yates, one of today’s finest collectors, both in Britain and the United States, has worked closely with the School to produce this interesting snapshot of Henderson’s work in the fifties.

The record is wide-ranging, and opens with a very early informant, Willie Mathieson, a retired farm servant who was himself a song collector, having started whilst at school at the end of the nineteenth century.  He had written down 600 songs, over half of which he had tunes for.

The second track is Jean Elvin, whose elder sister married a gardener at Balmoral.  Henderson called her ‘strictly a kitchen singer...  She was Willie Mathieson’s favourite singer.’  Seamus Ennis, working for the BBC, recorded a further four songs from her.  The song she sings on this record is a broadside from around 1911 of a locally murdered wife whose (possibly small) children ran three miles to the police station to report the death.  Gruesome, stark, and beautifully sung.

There are songs from John Strachan, described by Henderson as ‘by profession a farmer, but by nature a poet and chronicler ...  If ever a fierce stubborn tradition manifested itself in a single individual, it is the North-East tradition which speaks and sings with the voice of Old John Strachan.’

Among the other singers there are: Jimmy Young, another retired farm worker, sings (only slightly) bawdy songs; Jock McShannon, one of three singing brothers.  Finlay Maclean and Roderick Campbell who both sing songs in Gaelic - Yates describes Henderson as a ‘skilled linguist’; and Kathleen Behan, mother of Brendan and Dominic.

Hamish Henderson was born in Blairgowrie, the home of the Stewart Family, and unsurprisingly he collected extensively from many Scots Travellers.  Of the thirteen performers on this CD, 5 are Travellers, and of the eighteen tracks, 8 are by Travellers.  The best known of Henderson’s Traveller informants was, of course, Jeannie Robertson, of whom there is only one track of three short, simple songs here.  These recordings were made when she was still the delightful unmannered singer to be be heard on the lovely Queen Among the Heather in the Alan Lomax Portraits series (Rounder 11661-1720-2).  It is hard to detect a sign here of the almost operatic ‘art’ singer that Jeannie became in her later years.

That Mike Yates has chosen not to make a bigger deal of Jeannie Robertson, nor to exclude her, is witness to his understanding of the value of all the singers on this record.  It was at Jeannie Robertson’s house in Causewayend in Aberdeen that Hamish was introduced to many Traveller singers, including Blin’ Robin Hutchinson heard on this CD, and possibly Geordie Robertson who apparently played pipes for Gavin Greig.

These Traveller families are almost inextricably interlinked, and another ‘ceilidh house’ was that of the delightful Bella Higgins (Higgins was, of course, also Jeannie Robertson’s married name).  Bella is the most, and possibly most deservedly, represented on this record, with three stunning tracks, including a Peggy and the Soldier which Hamish calls ‘your masterpiece’.  Bella is the sister of Alec Stewart (husband of Belle and father to Cathie and Sheila) and Andrew Stewart, whose splendidly told story, Three Good Advices, closes the CD.

Mike Yates, who has himself recorded so much, and so well, for so long, has produced a fine tribute to the great Hamish Henderson.  The record is published on Kyloe Records, which is Mike’s own label named after a range of mountains near his home in Northumberland.  By going to the website: www.kyloerecords.co.uk you can also read ‘the story behind the CD’.