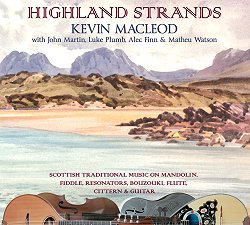 When one finds a 'solo' CD with a whole list of famous friends, the result can often be a rather flashy band.  Mercifully, that's not the case here - just a lot of very high quality accompaniments, rarely by more than two people, which never distract from Mr Macleod's superb playing.  Mercifully again, he's a dance musician, so the emphasis is on the music and not on the man - again, something of a rarity when the man in question is so technically accomplished.

If Kevin Macleod's playing is new to you (it was to me), then here's a taster: from track 1, Whiskey Before Breakfast.  Despite the CD's subtitle 'Scottish Traditional Music on Mandolin ...', I think this is actually a Canadian tune!  The selection of tunes is quite varied, although reels do predominate.  I've never entirely understood why, in the case of dance musicians.  Back in the early-fifties, callers always asked for "jigs or reels" for the Irish/Scots/American repertoire of dances then required.  These tempi were ideal for the 'walking about' style of dancing then being done - and polkas were generally a bit too energetic!  Since humans have two legs, most British dance styles (except waltzes) are in 2s, 4s or 8s, and I've always thought that polkas and hornpipes are much more fun to play than reels - unless you want to impress listeners, which dance musicians are seldom much interested in doing.

Here we get (as well as the reels) a good number of 'marches' - although I would have though that many of these were strathspeys, hornpipes, polkas or barndances, rather than true marches ... but I guess Scottish dance styles are somewhat different to English ones.  Here's a nice example from track 5, The Duke of Roxburghe's Farwell to the Black Mount Forest.

This is an altogether lovely CD which, I'm pleased to say, I can find nothing to comment adversely about ... another rarity!  You can buy it from: www.kevinmacleod.co.uk