Wearing the Britches; Mick Rodden's; Awake Awake; The Hearty Boys of Ballymote; Castleroe Mill; The Ace and Deuce of Pipering; There With You; Tied My Toes to the Bed; Dinan's Duo; I Have Travelled this Country; Con Cassidy's; My Bonny Boy Is Young; The Groves; The Hare's Lament; The Crooked Road to Dublin. 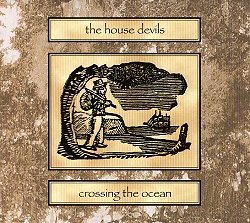 The House Devils are a Manchester based band.  The core members are singer and guitar player Matt Fahey and Mat Walklake on vocals, harmonica, flute, whistle and uilleann pipes.They are joined by Andrew Dinan on fiddle and stand up bass player, Anthony Haller.  There are also guest appearances from Aidan Kilroy on bodhran, Jonny Hulme on five string banjo, Laszlo Palko on persussion, Ian Lewis on Hammond Organ, not that I could hear it, and Alison King on vocal harmonies.  Mat Walklake is well known locally as a harmonica teacher, blues singer and blues harp player with a couple of bands and Andrew Dinan is currently a member of Ade Edmonson's punk folk outfit The Bad Shepherds as well as playing with Michael McGoldrick.

This is their second CD and mixes songs and tunes in almost equal measure but it is the songs that are the highlights.  The voices of the men singing, Matt Fahey and Mat Walklake, are both warm and easy though I longed for a duet and a little less control - more singing out from the heart.  The song Wearing the Britches, the first track on the CD, accompanied by five string banjo and featuring harmonica, would lead you to believe that the music will be Appalachian folk or American country blues style but, in fact, there is a wide mix of sources including one self-penned song.  Several songs are from traditonal Irish singers like Frank Harte, Len Graham and Joe Heaney.

The harmonies, where they are present, are sometimes too low in the mix especially in Awake Awake.  Throughout, the guitar accompaniment is really sound, sensitive and interesting and would have been quite sufficient on some songs especially I have Travelled this Country where the instrumental links intrude and break the mood.  There is a lot of arrangement, double tracking and use of additional instruments which at times adds nothing and distracts from the beauty of the song, the singing and the tunes.  A case of less would have been more.  There is undoubtedly talent here but it isn't given enough room to show.  The CD has an overproduced studio feel, and probably does not do justice to the quality of their live performances.

The double bass marks this out as a modern band sound rather than a traditional one and adds mood to the songs.  Unfortunately, the fiddle adds less and the bow work sounds laboured.  The two reels, called here Dinan's Duo lacked energy, colour and bite, made all the more obvious by each being played three times with little variation.  This is surprising given that Andrew Dinan was an all Ireland champion back in the 1990s.

The harmonica fits well with the song settings but is less comfortable on the ear in some of the irish tunes, lacking bounce, expression and emphasis.  The bodhran, played very much in the English style with too many 'showy offy' runs down the pitch, was more irritating than entertaining.  The hornpipe and reels set The Groves/Lady Birr's/Bonny Kate also suffer from intrusive percussion.

The tunes are mostly well known session tunes but played here rather lazily with little variation and superfluous double tracking.  The final set which should deliver a climax to the CD felt like a throw away and did little justice to the fine music played at sessions like the ones at Manchester's Jolly Angler which the sleeve notes link this set to.

This songs on this CD are the quality here and the CD will probably sell well at any House Devils gigs.  The album is also available from iTunes.