Gavin Greig: 'The Subject of Folksong'

This is a strange publication.  Its title is misleading, for it actually consists of a selection - as opposed to 'collected writings' - of a variety of publications, some important, some not, by Gavin Greig (1856-1914) the Aberdeenshire folksong collector, 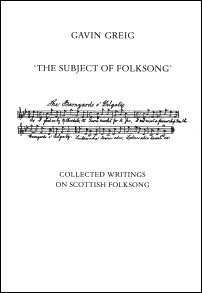 together with an obituary of Greig written by his collaborator, the Reverend James Bruce Duncan (1848-1917) for the Folk-Song Society.  The title in inverted commas is not Greig's, and although the book is 'edited', this consists of a page and a half of simple introduction; there is no other scholarly apparatus.  There is a music reproduction on the cover (Greig's manuscript score of The Barnyards o' Delgaty),but this is also misleading, as between the covers all the original music scores have been removed.

The editor writes from 'the University of Glasgow' but does not say from what position or department (but to be fair this is by no means unusual, contributors to journals commonly describe themselves as of the 'University of X' without indicating in what capacity); this nicely produced book, however, is from his private press on the Isle of Man.  But every item it contains, instead of being usefully facsimile, has been laboriously recast (OCR scanned?  retyped?).  Unless the whole affair was intended as a website which never materialised there would seem to be no good reason for this; anyone wanting to do any serious work with this material would have to check carefully with the originals.  I have shown this book to a number of researchers and librarians who have all commented, "What did he do that for?"

For those unfamiliar with the Greig-Duncan Folk Song Collection, which is currently at volume seven of the eight volumes being published by Aberdeen University and the School of Scottish Studies (the final volume appears later this year, if all are spared), it consists of over 3000 songs, texts and tunes, collected mainly in the North-East of Scotland, in the decade before the Great War of 1914-18, by two natives of the region, Greig (a parochial school master) and Duncan (a minister).

Greig had spent a working lifetime in the area, writing books, poetry, songs, plays and operettas, lecturing and performing, playing church organs, forming choirs, and bands - you name it - becoming 'Mr North-East Music' popular and secular in the process.  But when he was invited in 1902 by an historical publishing society, the New Spalding Club, to look into whether or not a smallish volume of 'popular'- i.e. traditional - music and song (throwing in hymns and fiddle music, if need be, to bulk it up) just might be rescued from the region, he was pretty doubtful if any remained.  But Greig was a thorough man, as well as a native of the region who spoke the local dialect and could put folk at ease, and on actually going out and asking (from all strata of society), he discovered that he had been, without realising, living in the midst of a treasure trove of folk songs; in a matter of months he found them in their hundreds within walking (and cycling) distance of his home.  Overwhelmed (and somewhat chagrined), he invited Duncan - who actually came from a family of folksingers and collectors - to join him, but this only made matters worse, for their combined efforts brought in so much new material that they never managed to get anywhere near publication.  The original 'small volume' became enough, as we now know, for eight hefty tomes.

Greig quickly realised the significance of their findings, and in 1906 expanded an earlier address to the local Buchan Field Club into a 76 page book entitled Folk-Song in Buchan.  This expounded his revolutionary findings and theories which, when circulated throughout Britain and Europe, brought instant acclaim, especially from the Folk-Song Society.  (Cecil Sharp received a copy the year before he brought out his English Folk-Song: Some Conclusions in late 1907; it is very interesting to compare the two).  But soon the collecting deluge gave Greig time for little else, and this was serious, because he had obtained five large grants from a very impressed Carnegie Trust for the Universities of Scotland for books and other expenses; the Trust now wanted publications.  So he hit upon the not entirely original idea of running a folk-song column ('Folk-Song in the North East') in the local Buchan Observer newspaper, where he printed samples of their findings, and invited comments and contributions.  His ingenious idea was eventually to assemble all the columns, bind them, and present them to the Trust.  Publication problem solved - except that the 180 columns he published over three and a half years also brought in ... a further avalanche of songs.

Both men were dead by 1917, and the War had put an end to such non-essential publishing.  In 1925, however, Alexander Keith and William Walker saw into print Greig and Duncan's attempt at a 'volume one' - the Child ballads (some 13% of the Collection).  Walker [long story: see History of Scottish Literature, Volume 4 , AUP, 1987, Chapter Two] gave it the 'it's all over now ' title of Last Leaves of Traditional Ballads and Ballad Airs Collected in Aberdeenshire by the late Gavin Greig, which partly explains why the bulk of the songs lay for another 56 years unpublished, although in safe-keeping in Aberdeen University's archives.

Fortunately [another long story; see Folk Music Journal , 1, (1967), 65-91, and 5, (1986), 176-201] Duncan's grandson, Paul, decided to show samples of the songs to an enthusiastic English Folk Dance and Song Society, who offered Pat Shuldham-Shaw as editor.  The first volume appeared in 1981, but Pat Shaw had died in 1977 and his colleague, Emily Lyle, was left to carry to completion a series of eight carefully edited and heavily annotated volumes, containing as a bonus not only the original music scores in Greig and Duncan's own handwriting, but also their discussions of the individual songs.  For the twenty years or more this scholarly apparatus has been supplemented by publications concerning the collection and the collectors, including a provisional bibliography of over 100 items in Folklore 95, (1984), 204-9.  None of these is mentioned in Stephen Miller's publication - with the following exception.

In 1963, Greig's great-grandson Arthur Argo, the singer, collector and broadcaster, teamed up with the American folklorist Kenny Goldstein, to republish, with family consent, the most important of Greig's writings, i.e. his Folk-Song in Buchan book, together with the 180 Buchan Observer folksong columns (these had been published before Greig's death in 1914 as Folk-Song of the North-East).  It has a scholarly, annotated introduction and a short bibliography - and is facsimile.  Not surprisingly, it became the 'must-have' background reference to the Collection on both sides of the Atlantic, and the most commonly consulted to the present day.

Stephen Miller's book consists of a recast version of Folk-Song in Buchan, together with recastings of six of the 180 newspaper columns and an assortment of Greig's addresses and song articles; these are of varying size and importance - all have the scores removed.  The addresses largely duplicate Folk-Song in Buchan (the extract he includes from the minutes of the venerable Banffshire Field Club, for example, says nothing new, other than flagging up a paper which, in fact, Greig never got round to writing).  The folk songs and their commentaries have already been published in the Shaw/Lyle volumes, where they are not only complete with their tunes, they also have the added value of other versions and comments from the two collectors. The Buchan Turnpike that Miller prints, for example, and its original accompanying article, is reproduced in the Volume 3 (song 460), with the music, together with five other versions.

Furthermore, the reproductions in Stephen Miller's book not only have no editing or annotation, they have no contextualisation.  The first two talks he reproduces, for example, are of some interest in that they represent what Greig confusedly thought before he actually started folksong collecting - but there is nothing in the book to tell you that.  More importantly, he does not point out that the 'Folk-Song in Buchan' piece was a later version of Greig's Presidential Address to the Buchan Field Club that Greig had later greatly expanded into book form in 1906, and would then further annotate the copies he distributed.

This is a strange labour of love by someone who seems oddly unaware of anything published and written since the Collection was 'rescued' in the early 1960s.  It doesn't even include Duncan's views and theories, expounded in his crucial 1908 lecture to the Aberdeen Wagner Society, and reproduced in Scottish Studies, 18 (1974), 1-37, (with the added value of a superb analysis and commentary by Shaw and Lyle).  The Folk-Song in Buchan part is worth having, if you can't get hold of a copy of Goldstein and Argo, but why wasn't it published facsimile?  (A decent library like the Vaughan Williams Memorial will make you a photocopy of the original - with Greig's scores and annotations - for around a fiver).

Is this book worth all of È15?  Had it been edited and annotated in relation to the recently published volumes of the Greig-Duncan Folk Song Collection and related publications, including bibliographical, had it included Duncan's theories, had it been facsimile - instead of recast and reprinted with the scores left out, with all the unnecessary errors that invites, (his printing 'Gregor' [?Walter] instead of 'Greig' in his introductory paragraph, makes me uneasy, as does typos such as 'aud' for 'and' later on), the answer would be, yes.  But I would save up instead over the next few months for the final Volume 8 of the Greig-Duncan Folk Song Collection, with its song index, editorial commentary, description of the two collectors, their lives, times, working methods, findings and theories, as well as invaluable accounts of the contributors and their songs, together with up-to-date bibliographic details.

Then think about buying the other seven volumes of 3000-plus songs and all their variants, with Greig and Duncan's own notes and essays, not to mention the scholarly comments of the editors, Pat Shaw and Emily Lyle, including also the late Peter Hall, Elaine Petrie, Adam McNaughtan, Sheila Douglas (and Alexander Keith and William Walker before them).

Why?  Because Greig and Duncan quickly realised that their great collection was not just 'Folk-Songs of the North-East of Scotland' (although Volume Three is a cornucopia of the local 'bothy ballads') but in fact transcended national (Scottish and British) as well as international boundaries.  It's a must-have for anyone serious about traditional song in general.  You really won't be disappointed.