John of the Green, the Cheshire Way

The famous triple-time hornpipes of North West England
with a selection of country dance tunes of the Baroque Era
Compiled by John Offord, Second Edition 2008 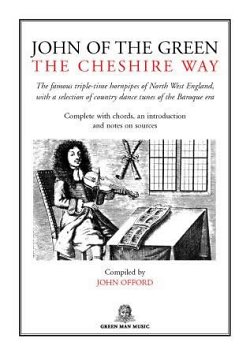 This is a tremendously welcome addition to the stock of English tunebooks now available, and an absolute must for anyone interested in this traditional music.  Broadly speaking it covers the fiddle music you find in tunebooks, published and MS, from about 1700 on.  It gives a pretty comprehensive look at what was around in the very early 18th century, and then takes a sporadic dip into later collections, finishing up with glances at some post-1800 material like Joseph Kershaw's and William Irwin's NW manuscripts.  It is the earlier stuff that you need to buy the book for, as it represents a very interesting selection of 3/2 hornpipes and other music from that era.

The usual sources are well-plundered, like Thomas Marsden's collection of triple-time Lancashire hornpipes from 1705.  I say the 'usual sources', but it needs to be remembered that John Offord is here presenting a second edition of what he first published in 1985.  There was nothing 'usual' about taking an interest in researching this music back in the '70s, and John was one of the pioneers.

It is interesting to compare the new and the old editions: the first, and most obvious difference is the title, as the original was endearingly titled John of the Greeny Cheshire Way.  This came from Offord's mistaken reading of 'John of the Green Ye Cheshire Way' as printed (rather oddly) in Daniel Wright's Extraordinary Collection; I feel it is a bit of a shame he has now corrected this: I shall always think of the book as 'John of the Greeny', anyway.  While on the subject of Daniel Wright, it would be a wondrous service to those interested in the music of the British Isles if someone were to produce an edition of all the tunes published by Daniel Wright, that would be a real treasure trove.  Maybe if you have a minute, John?

The main difference is that the new edition is a more compendious look at the more 'archaic' material, that dating from pre-1700 in form, the 3/2 tunes and so on, with a bit less of the more out-of-the-way more modern stuff.  The original addition was a more quirky and serendipitous choice, which I imagine represents the state of Offord's research at the time.  People starting taking an interest in old tunes now, when the internet puts everything accessible at the press of a button, will have no conception of how many hours will have been put in to chasing these tunes back in the '70s and '80s.  Believe me, I was there.  Perhaps John is also now more interested in the baroque type of tunes, and the interface between that world and social dance music: certainly the cover picture of the new book shows a rather respectable musician with the sheet music in front of him.  The 1985 book had a much more rumbustious cover, with a couple of shady Cumbrian character playing at Brough Fair (the picture, I couldn't help noticing, seemed to have been borrowed from an LP of NW tunes I made with Crookfinger Jack a few years previously).  In many ways the old book was more charming, but the new one is infinitely better produced, more use, and much more comprehensively annotated.

The book is full of great tunes, and it is worth drawing attention to a few to give the flavour.  We have 3/2 classics like the Lonsdale Hornpipe and the Old Lancashire Hornpipe, and that extraordinarily beautiful air the Northern Lass (John gives this in E minor, and I am not 100% sure of his transcription, but let that pass).  We also have the more modern forms of hornpipe, like the early Salt Fish and Dumplings and the later Sportsman's Hornpipe and Iron Legs: all of these very varied tunes have become standard parts of the repertoire, and in recent years are starting to help define what people mean by English music.  You can also find the most intriguing Foxhunter's Hornpipe, the 3/2 version of the very well known Irish slip-jig The Foxhunter's.  Which came first?  We will never know.  Offord gives this tune as from an anonymous 18th century manuscript, which means I suspect he borrowed it from Jamie Knowles, because Jamie didn't know it came from the wonderful Thomas Hattersley MS.  So there is still some research to be done, any youngsters out there, nobody has published the Hattersley MS that I know of.

As well as the tunes, we have copious notes on origins, and interesting (though obviously largely conjectural) ideas on appropriate bowing, and steps for 3/2 hornpipes.  These are 'made up', clearly, but they seem to work, and people are using these and similar ideas.  Dancing to 3/2 rhythms is of course widespread in other parts of the world, even though it died out in England, so perhaps a comparative look around would be a good idea, I wonder if anyone has looked into this?

In all events, buy this book.  It is a complete joy, well researched, well produced, and sheds a wonderful light on the old ways (mainly in the north of England) that can still illuminate and inspire what so many young musicians are doing today.  Well done, John Offord, and let us all look forward to his next project, whatever that may be.

The book is obtainable from www.johnofthegreen.co.uk at Ł15 + p&p (also PayPal), or www.hedinghamfair.co.uk