Tunes of the Munster Pipers, Volume 2 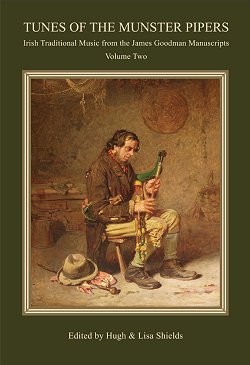 Rarely has a front cover of a book given such an indication of the contents of a book.  An impoverished Union Piper is sat playing his Irish pipes in a tattered jacket, knee breeches and brown boots.  Though the Piper is unlikely to be one of the informants to Canon James Goodman, it is highly likely that the pipers of the pre and post famine times were in a similar state of poverty, rich in music but little else.  The painting is a detail from Edwin Thomas Roberts Overture from 1876.  It was done almost two decades after Canon Goodman (1829-1896) collected over 2,300 tunes, mainly from the pipers of West Cork.

For many years this great collection was talked of, revered, but rarely seen by traditional musicians.  There was often talk of it being published and if it was then it would be considered amongst the two other great works of Irish Traditional Dance Music-Captain O'Neill's Dance Music of Ireland and Brendan Breathnach's five volume collection of Ceol Rince na hEireann.

There were many other collections of course; many from well-meaning antiquarians such as Petrie and Joyce but, apart from O'Neill and Breathnach, the best collections have been smaller amateur regional collections in Kerry, Sligo and Donegal, or musicians like Willie Clancy or Patsy Touhey and composers in the traditional vein such as Junior Crehan, Charlie Lennon, Sean Ryan, Paddy O'Brien etc.  Others like Bunting saved the ancient harp tunes but they weren't and still aren't generally played, though their are some fine tunes amongst them.  The Neale (1726) Jackson (1774) and O'Farrell (1804) collections, like Petrie (1855) and Joyce (1875) collections are of great interest but weren't played by the ordinary musicians because they weren't available through cost or distribution, though many of the tunes, especially Jackson's, are played still.

In Scotland Neil Gow's tunes were played by traditional musicians because they were printed and distributed and were available without costing a poor man too much.  Kerr's Merry Melodies were cheap, cheerful and available in every music shop in Britain at 2/6 for 450 tunes crammed in each of the four volumes (and incidentally a lot of tunes in the Irish section of Kerr's seem similar to those of Goodman).  Even now some of the local collections of tunes can be exceptional and valuable sources of tunes but simply aren't available outside a small distributional area.  In Ireland until recent times outside the main cities there was hardly a specialist music shop which was why, when in Dublin, we made a beeline for specialist music shops such as Walton's or Claddagh Records.  London had Colletts and Dobells.  There are very few other places could you find printed music or non-mainstream records.  Nowadays there are a great many music collections available.  The internet has everything of course, but the delight at finding a rare book or LP was magic in those shops.

Canon James Goodman was born in Dingle, County Kerry in 1828 in a rural area where the language spoken was Irish.  His family was Protestant of English stock and like his father he was ordained into the Anglican church and his ability to communicate in Irish with the ordinary people of the area, first Creagh, then Ardgroom in County Cork while working as a curate to the Irish speaking people of the area.  It was in Ardgroom that he first began to copy down tunes.  At first he played the flute then began to play the Irish Pipes.

The Irish pipes were developed in the early 18th and 19th centuries and were played by the gentry and the peasantry.  How the poor - and drastically poor at that - people obtained or afforded their pipes is somewhat of a puzzle.  Lord Edward Fitzgerald and Canon Goodman could probably afford exotic wood, silver and ivory pipes made by the finest makers but the poor piper would rely upon bodged fruit woods or elderberry (known as 'the boor tree' from which reeds could be made too) and brass keys made by local makers.  They would have been time consuming to make, but there are few more determined people than pipers when they want to own a set.

The music that Goodman heard and wrote down was that strata of Irish music that was a good mixture of native Irish song and dance tunes, Scottish and popular dance tunes of the day such as waltzes, reels, including that old Southern tune Dicksey Land.  The Sligo American fiddle tunes, often Scottish in origin had, like the fiddle, not become the mania it would eventually become towards the end of the 19th century and up to the 1920s.  The Canon wasn't particularly discriminatory and had no apparent desire to publish the 2,300 tunes he wrote down.  Nor did he make the collection for the antiquarians.  The impression given is that he simply loved the music and that his tune collecting took his mind off his missionary work and perhaps the difficulties of the poor people of his parishes particularly during the famine times.  Much of his music he got from two pipers Tom Kennedy and his brother Andy.  Possibly, noted Hugh Shields, they gave him 700 tunes and he may have got tuition on the pipes from them too.

Hugh Shields (1929-2008) of course was the noted Belfast song collector and author and he edited the first volume of Tunes of The Munster Pipers published in 1998.  His wife Lisa, librarian, concertina player and uilleann piper worked with Hugh on volume two of the Goodman collection and has done a splendid job on it.  Of course the world - well the technology - has changed in the sixteen years since the first volume was published and as well as the printed word and music of over 500 tunes in this splendid work, there is also a substantial online index of research information on the whole Goodman collection.  So value for money is certainly here.  The first volume is now currently out of print but might when funds allow, be reprinted.

There is a wealth of tunes and versions within the Tunes of The Munster Pipers to explore and musicians with an eye for a rare version will enjoy delving into these tunes as they were played by the pipers, fluters and fiddlers of West Cork before the terrible famine of 1847-49.  Recent recordings by Mick O'Brien and Aoife Ni Bhriain on the pipes and the fiddle with Emer Mayock on the flute have brought to life some splendid examples from the first volume.  Musicians will find a great deal to interest them in volume two, and just as we look into O'Neills and Ceol Rince na hEireann for different and rare tunes, so will we lose ourselves in this valuable, finely produced and much awaited book of James Goodman's Tunes of The Munster Pipers and it will be referred to and enjoyed for many years to come.