For reasons beyond my understanding, no review of this outstanding historical document, issued almost two years ago, has so far appeared in Musical Traditions.  [Veteran decided, rather than sending it to me, to give the review copy to someone else, who has failed to produce the review - Ed.].  So, here’s my unsolicited review!

Good Order! is a collection of recordings chiefly made by the BBC (it’s not quite certain who recorded a couple of the songs) at the Eel’s Foot pub in Eastbridge, Suffolk, in 1938/39 and 1947. 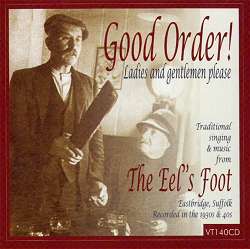 There are thirteen songs, plus a couple of melodeon tunes, one of which was recorded as someone else danced.  The CD has been produced by John Howson as a ‘joint project with Theberton & Eastbridge Community Council’ and has been partly funded by an ‘Awards for All’ grant.  I believe that, as part of the terms of the grant, a free copy of the CD has been given to every household in Theberton and Eastbridge.  What a great idea!  Pity that it took so long.  (And I’m not getting at John here.  Without his effort the locals would still be waiting to hear their forefathers).

According to Dave Arthur, it seems that in 1938, Leslie Morton, described as ‘a Marxist historian’, moved to Leiston Common, a couple of miles from the Eel’s Foot, and that Morton took A L Loyd along to the pub one night when Bert was spending a weekend at Morton’s cottage.  Bert Lloyd returned to the pub on 13 March, 1939, with BBC producer Francis Dillon and a sound engineer, and made the first of these recordings.  Actually, the recording date is a little confusing as the BBC records show both 13 May, 1938 and 13 May, 1939 as the date in question.  In 1947 the Irish composer E J Moeran, who had previously arranged for the BBC to record Harry Cox and other Norfolk singers, visited the pub and made further recordings on behalf of the BBC.  It must be said that the quality of Moeran’s recordings are somewhat better than the earlier BBC ones, although, on the downside, they do come with the slightly condescending voice of a BBC announcer.

It can, I think, be said that most of the songs heard here are now relatively well-known, although this would not, perhaps, have been the case when the recordings were made.  One song, Jumbo Brightwell’s False Hearted Knight, has previously been issued by Peter Kennedy & Alan Lomax, but the rest of the material appears here for the first time.  In a recent Musical Traditions ‘Enthusiasms’ piece, Rod Stradling compares the terms ‘Texture, Function and Context’, as related to traditional singers, with the corresponding absence of these factors among today’s revival singers.  Listening to the Eel’s Foot singers, and looking at the photographs of them sitting round a table, each man paying attention to what is going on, I am struck by the closeness of it all.  They may have heard Jumbo Brightwell sing the False Hearted Knight dozens, if not hundreds, of times, but they want to hear it again!  It is a scene that was once known throughout the land.

So David would have his turn.  He only knew the one ballad, and that, he said, his grandfather had sung, and had said that he had heard his own grandfather sing it.  Probably a long chain of grandfathers had sung it; but David was fated to be the last of them.  It was out of date, even then, and only tolerated on account of his age.  It ran:

An outlandish knight, all from the north lands,
A-wooing came to me...

Flora Thompson’s England was all but vanishing when she wrote the above in her wonderful book Lark Rise to Candleford.  Who, if anyone, sings the False Hearted Knight in Eastbridge today?

Many of these singers appear to have had small repertoires, each knowing only a few songs, and yet, as I said before, they continued to sing these songs over and over again.  (‘We are the music makers, and we are the dreamers of dreams’).  Jumbo Brightwell, (and probably his father, Velvet), on the other hand, knew many songs.  Luckily Jumbo, and a few of the others, were recorded on later occasions; and so we now have a much better idea of what could have once been heard sung in the Eel’s Foot.  But these BBC recordings are important, because they were made at a time when the singers and listeners were all part of a living singing tradition.  It was, in a real sense, community singing, where the singers, songs and audience were all part and parcel of the same thing.  True, the tradition was on its last legs - which is another reason why these recordings are so important - and I suppose that part of what Rod Stradling is asking relates to the questions: are today’s revival singers a part of this tradition?  Are they part of a new tradition?  Or are they, in fact, a part of any tradition?  The Living Tradition magazine is currently marketing a series of CDs by ‘The Tradition Bearers’ - revival singers who are being touted as ‘traditional’ singers.  These singers may, indeed I think do, belong to a tradition.  But it is not the same tradition that existed before.

If there is a difference, then the difference comes from the loss of the sense of community, with all that that entails.  Songs removed from this context become...well, just songs!  This is why politicians can stand up in Parliament and mock revival singers.  This is why the songs, and the singing, can be so open to ridicule and misunderstanding.

If I have any complaints about this CD, then it is the fact that John fails to print the texts of the songs and that the song notes are a little on the short side.  Mind you, with such well-known songs there is little extra that needs to be said, although I could add that the tune for Poor Man’s Heaven was also used by the Carter Family for their 1929 recording of The Cyclone of Rye Cove, and that the American Little Mohee was usually more chaste than her British counterpart, The Indian Lass.  These, of course, are minor points.

If you have the slightest interest in traditional singing, please listen to this CD.  Consider, if you like, what it is that we have lost in the passing of Velvet, Jumbo, Diddy and all these other fine singers, and think how the future could be, if we could only sort out why they were so important.