These two musicians paths have often crossed, so the appearance of this album is no surprise.  John McSherry comes from a well-known Belfast family, plays uilleann pipes and various whistles and first came to notice through the band Tamalin, which also included his siblings Tina, Joanne and Paul. 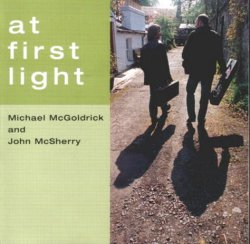 Like Mike, he was brought in for the sessions which constituted the first L˙nasa album (though that was before said band really came into existence), but made more of a name for himself as a member of Dˇnal Lunny's Coolfin.  Manchester-born Mike first emerged in the local trad-rock band Toss the Feathers, recorded two pretty popular fusion albums, Morning Glory and the appropriately tagged Fused, played with the Afro Celt Sound System and is now a member of Capercaillie.

While neither John nor Mike has ever really moved too far from his roots, At First Light is very much a return to first principles, reflected especially by the choice of material.  While there are compositions by Liz Carroll, John Carty and Tommy O'Sullivan, amongst others, both John and Mike each has one of his own and the symbiosis of their relationship is indicated by the fact that these two tunes (both jigs) run into each other - first McSherry's solo Lady Lane, followed by Mike's Farewell to Whalley Range (probably the only eulogy ever received by this Mancunian suburb).

A sparkling set of familiar reels (Farewell to Connaught / Liz Carroll's / Limestone Rock) kicks off the album and includes some splendid low whistle interplay between the twosome, joined by spirited fiddle play from Dezi Donnelly and Aidan O'Rourke.  John's brother Paul propels the ensemble with some typically spruce guitar and the whole kit and caboodle very much sets the album's tone.  In contrast, the slow air Doinna provides the opportunity for more reflective expression, although some might quibble at the 'ethereal' synthesized backing emanating from Donald Shaw's keyboards, taking a gorgeous tune dangerously close to 'Celtic hush' territory.  The effect can be compared with the delicacy of Ed Boyd's guitarwork on Trip to Ireland / Jutland; Boyd being a musician, as any Flook-watcher would know, who really does know how to accompany wind instruments.

Tin whistle lovers will find the duet on John Carty's reel, Jimmy Batty's, a real treat while Manus Lunny provides excellent accompaniment for its successor, The Bloom of Youth.  In antithesis to the opening track, its opposite number, Road to Taymult, is one of those slowish reels which, like a Monaghan country lane, seems to ramble around the drumlins without ever reaching a destination (and, indeed, it does eventually just fade away).  Fortunately, much of the main protagonists' playing on this album lingers in the memory.