It’s a rum business being a reviewer.  Stuff you would uncritically rave over, if you’d salvaged it from some obscure corner of a second hand record shop, gets remorseless, microscopical examination when it arrives in a jiffybag labelled Musical Traditions.  On with the headphones.  Out with the scalpel.  Hack.  Dissect.  Thrash inexorably through your misanthropic primer of unrepeatable insults. 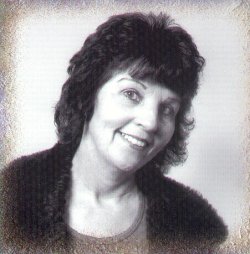 Therefore, before I pull the wings off the gander, let me make it clear that I absolutely love this disc.  True, I found some shortcomings, and I don’t doubt that a Gaelic scholar would have found a good deal more.  Even so, I consider it a very important record indeed.

To put some beef on the bones, as Turlough O’ Carolan might have said: Sarah Ghriallais comes from one of Connemara’s most distinguished musical families.  Sean-nós fans will be as aware of Sarah as they are of her sisters, Norah and Nan.  They will know that, between the three of them, the prestigious Corn uí Riada trophy of the Oireachtas has been cornered by the Ghriallais family no less than five times.  That is a remarkable feat, and one which may be rooted in childhood ambition.  I was once told that, behind the Ghriallais homestead at Idir Dhá Sháile, there is a natural amphitheatre.  It was used by the girls as a place to practise their singing, whilst dreaming of future days when they would take the Gaelic world by storm.  I do not know whether the story is true, or even whether the amphitheatre really exists.  However, if the facts are as presented, it could well account for their highly individual singing style.

Sarah sings eleven songs on this record, all of them as Gaeilge, and nearly all of them well known in the Connemara tradition.  Since the disc is approximately fifty five minutes long, we have an average track time of about five minutes.  That, by Connemara standards is fairly economical.  However, there is practically nothing by way of the short, lively songs which still abound in that part of the world, and which could have broken up an otherwise unremitting programme.  True, there is Táilliúr a Mhaga, which pokes fun at the philandering tailor.  Yet, despite being set to a fairly rhythmic tune,

its treatment here scarcely qualifies the piece as an example of amhrán tapa.  This therefore is not a disc for the novice, or the faint hearted, or the tourist of traditional song.  It is a very stylish top drawer production for the connoisseur, and it needs to be judged as such. (sound clip - Táilliúr a Mhaga)

There are songs enough to satisfy the connoisseur, and I was particularly taken by the magnificent air of An Sagart na Cúile Báine, a lament for a drowned priest from Co Mayo. (sound clip)  As the booklet notes point out, this is an unusual melodic construction for Connemara, and I concur that the tune is probably of Munster origin.  Nor does it appear to be the only melodic migrant, for the wider Gaelic world makes its presence felt in the forms of Dónall Óg and Eileanór na Rún.  Also, there is a song here called Fill Fill a Rún Ó.  Again, the subject matter is a priest, this time in a song of reproach for one who has turned his collar to that of a Protestant minister.  In this case, the shape of the tune, plus references in the text to Sagart O Domnhaill, plus the comparatively high incidence of Protestantism in that county, make me wonder if it might have wandered down from Donegal.  But it was the air which Sarah uses for Máire Standúin that most surprised me.  If you ever get the chance, take a listen to Mick Hoy’s Co Fermanagh version of The Banks of the Bann.  It is on the Northern Ireland Arts Council cassette, Here is a Health: Songs, Music and Stories of an Ulster Community (no matrix number).  The melody which Mick uses is not the hymn tune commonly associated with The Banks of the Bann, but his air does appear to have a strong family relationship to Sarah’s tune for Máire Standúin.

Nevertheless, wonderful singer as she is, Sarah sounds a notch or two below her usual form.  Her voice is never less than striking.  Even so, on An Sagart na Cúile Báine and Donncha Bán she seems somewhat hoarse, and her performances throughout the disc have a quality of reticence about them.  This, I must explain, is not Sarah’s first outing on commercial release.  Brian Ó Ruairc who, coincidentally, earns his crust lecturing in the language of this disc’s producers, issued a cassette of her in 1987 (Camus CP 004).  Comparing her performances then with now is a striking exercise, for I mentioned the famous Ghriallais style earlier.  It is far more forthright than that of most Connemara singers.  It involves a wider dynamic range, plus a much harder tone, and masses of projection.  In some ways the sisters are more reminiscent of Eastern Europe than Connemara.  Their style in fact is just the sort of thing which might have evolved from practising in an amphitheatre.  I need to qualify that by saying that Sarah is probably the least ‘Bulgarian’ of the three sisters.  Even so, she sounds more subdued here than on the Camus cassette.

Why is this?  I cannot be sure, but I’m wondering whether the circumstances of recording might have something to do with it.  My feelings are strengthened by the fact that three of the songs here also appear on the Camus tape, and the newer recordings are shorter by between one and two minutes each.  In one case - Amhrán Muighinse - this is partly attributable to the fact that a verse has been omitted.  For a tradition which deals in orally transmitted non-narrative songs, textual instability is of no consequence whatsoever.  Indeed, one could argue that it is an inherent feature of the singer’s art.  However, her tempos on these three later recordings are conspicuously faster than those of the earlier ones.  It’s a long time since I heard her performing live, and I cannot rule out the possibility that Sarah has simply modified her style over the years.  However, as anyone who has ever associated with Connemara singers knows, the finest performers often display a nervousness about their art, and a temperament which would be not unbecoming to an opera star.  It can be very difficult to coax the best out of them, and they frequently do not respond well to strange environments.

I was surprised therefore to discover the recording location given as Leitír Mealláin, rather than Sarah’s own kitchen.  My sense of geography is bad at the best of times, and the Irish countryside is littered with place names.  Nevertheless, the only Leitír Mealláin I can recall is on the west coast of Gorumna island which is itself off the coast of Lettermore island.  Although accessible by road, the journey from Idir Dhá Sháile would be a difficult travail even by Connemara standards.  I am left wondering therefore whether somebody has a recording studio out there, and whether that was the reason for the choice of location.  Whether or no, the clean and consistent acoustic certainly suggests a recording studio.  But if artistic prowess has been sacrificed for good sound, then I hope Cinq Plančtes do not make that mistake again.

My other bone of contention lies with the booklet notes.  Cinq Plančtes, is a French company, and I am conscious that they were working with an unfamiliar language in a strange idiom.  Nevertheless, inelegant translation of purple prose means that the document’s readability varies between the difficult and the downright impossible.  Moreover, Jean-Yves Bériou, the booklet’s author, is clearly no expert.  I detected near-verbatim liftings from various writers, including Brian Ó Ruairc, Liam Mac Con Iomaire, Seóirse Bodley and Daniel Corkery.  However, the only acknowledgements I could find were made in passing to Ó Ruairc.  The result of all this borrowing is that Bériou seems to have absorbed a fair bit of Gaelic League mythology - particularly with regard to the origins of the sean-nós - and to have made a few factual errors.  For instance, without going off and re-reading it, I cannot refute Bériou’s statement that Dónall Óg features anywhere in James Joyce’s story, The Dead.  However, the central ballad, around which that story is built, is not Dónall Óg, but a fragment of Lord Gregory.  Incidentally, it would probably have been too much to expect song transcriptions in trilingual form, and partial translations are embedded in the notes in French and English.  Nevertheless, it would have been a nice touch had the publishers included a set of texts in their original Gaelic.

For all that, I feel this is a case where it would be counterproductive to dwell on the product’s imperfections.  I have had occasion to castigate native Irish writers for laziness or shoddiness, and in one instance, for downright opportunism!  Whilst such things are inexcusable amongst people who know, or at any rate ought to know, Cinq Plančtes hardly falls into that category.  Also, the booklet contains a substantive biography of Sarah, plus a well thought out appraisal of her importance as a singer.  That is a distinct notch up from at least one home grown product I have had occasion to criticise recently.  Thus, in my estimation, Cinq Plančtes deserves an accolade for making a brave attempt, and for showing so much initiative.  I hope the sales justify their efforts.  Moreover, I was pleased to note that there are other sean-nós projects in the pipeline, including a bilingual anthology in book form.  Nevertheless, Cinq Plančtes have clearly set themselves a very high standard.  One hopes that no more of their ships will be found short of the smidgen of tar.