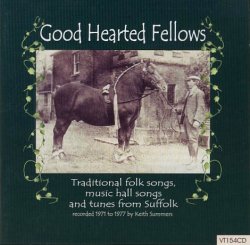 Rarely, I think, can there have been a CD released with a title so utterly appropriate to its content; here we have 32 tracks by 16 or so 'good old boys' (and Dolly Curtis, who was definitely a good old gal!) of songs and tunes for which the term 'pleasant and delightful' might have been especially coined.  That they were all recorded by another particularly good old boy, the late and much lamented Keith Summers, should come as no surprise to readers of this magazine.

Keith told me about this project some 18 months before his death; indeed, he sent me and Veteran's John Howson a pair of cassettes containing between them 77 tracks which he intended to be the basis of a double CD showcasing his Suffolk recordings - particularly those not currently available elsewhere on CD.  Keith was a man of great enthusiasms, and it wasn't too long afterwards that I got the instruction to put the Suffolk recordings on the back-burner for a while, as he had another project - his Fermanagh recordings - which he wanted to do first.

I wasn't too worried by this - not knowing at the time quite how ill Keith was - and set to work on what became the double CD The Hardy Sons of Dan.  Mercifully - and with a great deal of help from Paul Marsh, Peta Webb and Ken Hall, Geoff Wallis and Finbar Boyle - it was finished and presented to Keith, to his great satisfaction, only a week or so before his death.

Some months later, when we started looking at the Suffolk material again, a very serious problem emerged.  In the letter accompanying the original cassettes, Keith had written 'The grouped items highlighted in green will become more relevant in the context of my notes.'  No such notes have ever come to light!  Further, he had decided that, since the MT double CD was unlikely to be done with his hand on the tiller, he would prefer a single CD of his recordings to appear on the Veteran label where they would get the widest possible public exposure, particularly in East Anglia, while MT would produce a further double CD of 'the best of the rest'.  John Howson and I discussed the problems involved, and came to some approximate decisions.  But since it's obvious that he would have to make his selection first, we at MT weren't able to start the long process of listening to some 30 CD-Rs from the National Sound Archive, where Keith's collection is stored, until quite recently.  That's why this Veteran CD is now out, whilst the MT double is tentatively scheduled for launch at the Keith Summers Memorial Festival at the King and Queen in May 2007.

All that being said, John has adhered firmly to the spirit (if not exactly the same tracks) in which Keith originally conceived the project, and his original title, Many a Bright Good Hearted Fellow - taken from Ted Laurence's splendid song, Do Your Best - is extremely well-served by this selection.

The CD starts with the same Ted Laurence singing Dicky & Cart, a very complete account of a country couple's shopping trip in their donkey cart.  It's obviously a music hall song and employs the hackneyed Thrashing Machine tune.  Nothing of any great moment you might imagine - but then you notice the quality of Ted's singing.  Coming from north Norfolk, it's perhaps not surprising to find a little of Harry Cox's style in his singing, and there's some real class in the way he handles this simple song (sound clip).

To carry on with the songs for the moment, we next hear Jimmy Knights with Ratcliff Highway, and a slightly different tune to the well-known one.  This is often the case here, for Fred Whiting's Jack the Drover (sound clip) has a quite different melody, which he handles with great skill - particularly in the insertion of extra beats into the line to accommodate extra words.  This is lovely stuff!

George Ling's Lakes of Coolfin comes with a completely new (to me) tune (sound clip, left), whilst Billy List's Maria Marten uses the Banks of the Sweet Dundee one, and Jumbo Brightwell calls a version of The Dolphin tune into service for his Botany Bay (sound clip, right).  Another great performance!

There is also a good selection of songs you probably won't have heard before: Ted Cobbin's Spithead is a Spanish Ladies parody; Jimmy Knights sings I Can't Change It with great relish, and Harkie Nesling does what is very rare amongst English traditional performers - and sings Come and be my Little Teddy Bear to his own fiddle accompaniment.

But perhaps the greatest delight is Ted Laurence again with a Harry Clifton music hall / parlour song, Do Your Best (sound clip).  Sentiments such as these occur frequently in Victorian poems and songs, but this is coupled to such a glorious tune, and Ted makes such a good job of it that I think this has to be my favourite song on the whole disc.

The ten tunes are interspered between the 22 songs, giving some nice textural contrast to what is a really excellent selection of material.  Eely Went plays a typically diverse set of scraps of polkas welded together on track 4, and Pip Whiting does the same on track 7.  Interestingly, both include versions of a tune more widely known as Jack's Life.  Track 11 is a fiddle tune from Pip Whiting and a snatch of a song by Charlie Whiting, titled They Daren't Do it Now.  As the notes correctly state, the latter is a parody of the widely known but rarely sung I WIsh They'd Do it Now, but the former is, I think, the tune to the song The Girl I Leave Behind.

Fred List is a melodeon player with a style somewhat different to many Suffolk musicians - and very much to my taste.  Although he played in Blaxhall Ship regularly, I don't recall ever having heard him play during any of my visits to the pub in the late '60s and early '70s.  Very much my loss!  Anyway, he finishes the CD in fine style - seamlessly blending half a dozen tunes into one splendid set (sound clip).

This is a great record, and one of which I am certain Keith Summers would have been justly proud.  And you will be proud to own a copy, too!