Any visitor to Dingle town in West Kerry seeking information on local traditional music would be well advised to visit the Dingle Record Shop just up the road from Dick Mack's pub on Green Street (where, sadly, you can no longer get your shoes repaired while supping a pint). 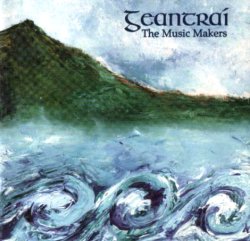 It's run by one of the town's undoubted characters, the exotically-nomenclatured Mazzarella O'Flaherty, sister of the landlord of the excellent O'Flaherty's bar, and tends to open when Mazz, as she's known, feels like selling a few CDs.  It's here that, apart from finding out about the best local sessions, you can pick up locally-produced albums such as this and catch up with news about the local scene.

In days of yore, of course (oh, all right, ten years or so ago), one of the renowned local figures was the Australian guitarist Steve Cooney.  Recently another international blow-in, the American guitarist Steve Coulter has set up his own studio here and engineered this recording in 1999.  (Conspiracy theorists or followers of Arthur Koestler might home in on the shared initials and forenames, while some might claim that the two Steves have never been seen together at the same time.  Well, they might think that, but I couldn't possibly comment.)

The Music Makers might be described as "the sound of Dunquin", a little place at the extremity of the Dingle peninsula.  It might, but, then again, it might not, since only one of this sextet actually hails from Dunquin - accordionist and sean-nós singer, Pádraig Ó Sé, who manages to combine farming with playing for set-dancing and broadcasting on Raidió na Gaeltachta (which operates locally from a small building just a stone throw away from Séamus Begley's farm - hence the oft-heard "Séamus has just gone by on a tractor, we'll see if we can get a song from him" (except that being a translation, those words are never heard at all!

The five other members are all settlers and include two Dubliners, uilleann piper and pipe-maker Cillian Ó Briain plus fiddler Feargal Mac Amhiaoibh and his daughter Muireann who plays flute and whistle and sings.  The other two are both from England: guitarist Jon Saunders and bodhrán-player Andrea Power.  "Aren't there enough Irish practitioners of the sainted frame drum already?", I hear you enquire.  Well, obviously not, since this 'Lancashire Lass' (sic) also teaches locals and visitors (my emphasis).

What of the music?  Well, some was recorded live and other parts in the studio and, with each member seeking to shine, it's a bit of a mixed bag.  The album starts and ends with two rousing sets featuring Ó Sé's accordion well to the fore, the first a set of polkas and the second a set of slides.  However, what lies in between ranges from the relatively mediocre, a lacklustre rendition of Jean's Reel, featuring especially wayward whistle, to the utterly charming (Pádraig's rendition of the song Bim-se i gcónai 'Randaireacht).  This isn't to say that it's poor musically (far from it), but fairly reflects what you're likely to encounter in a typical session.

I'm not sure where else you can buy this, but, if in doubt, ask Mazz or check her planned website www.dinglerecordshop.com.