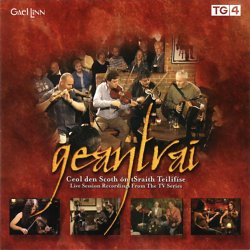 Let me say straight away that this is one of the most enjoyable compilations of (relatively) modern Irish music I've heard for a long time - though maybe I haven't heard all that many!  It is selected from the TG4 series of programmes which have run continuously, every season for the last 10 years, presenting 'lively music' - geantraŪ.  It should not be confused with GeantrŠi: The Music Makers CD released in 1999, but it will be reasonable, I think, to compare it with the RT… DVD Come West Along the Road, released last year.

Regarding that, I wrote: 'It's a given that the sound on TV music programmes is almost always absolutely dreadful - and the viewers in the Irish Republic seem to fare no better in this respect than we do here in the UK'.  However, that was for a release dealing with 1960 to 1980 ... this is the decade starting in 1996, and the technicians of TG4 seem to have done a far better job - given that we can't actually see any musicians hammering away, unheard on the recording!  Although further research reveals that a DVD version does exist (CEFDVD189), where this may be evident. That said, the sound here is generally exemplary, and it's hard to believe sometimes that these recordings were 'outside broadcasts' from real sessions in Ireland, Scotland, England and the USA.

There are some lovely things to be heard here; we start with Providence, featuring the flute of Troy Bannon, concertina of MicheŠl ” Raghallaigh and fiddle of Michelle O'Brien in a very lively set of reels, and move on to a pair of jigs at a rather more considered pace from the twin fiddles of Liz and Yvonne Kane.  This is a really nice track, and it was something of a surprise to realise that there were very few female players to be heard here.  I was delighted to find old mates Jackie Daly and Sťamus Creagh on track 3 but, although they start off in fine spikey style, they seem to lose interest about halfway through the second tune.  The audience doesn't seem to notice, though.  Indeed, it had hardly registered with me before I was whisked away by Gerry O'Connor with some astonishingly intricate banjo playing, which gets more and more inventive (or silly, depending on your frame of mind) as the set progresses.

Most of the tracks feature a pair of players, with guitar or similar backup, and the majority are so good that it would be invidious to pick out individual tracks to praise.  I can note that the Boys of the Lough surprised me with a couple of English hornpipes, and that At the Racket show what can be done to make what may seem like an entirely inappropriate instrument (sax) sound perfectly at home in the music.  All three pipers to be found here are in great form, but Ronan Browne together with Peter O'Loughlin are just so engaging, I want to bring them home to live with me!

Oddly, given the CD's title, none of the three songs featured here are particularly lively - and I found John Spillane's modern song, All the Ways You Wander, downright dull.  Fortunately, it had been preceded by the lovely Charlie Lennon and Johnny ”g Connolly with a couple of barndances - so I was happy for some time afterwards!

As I said at the start, this is a thoroughly enjoyable compilation - though I'm told it isn't very representative of the TV series' content.  It should be available through Copperplate (www.copperplateconsultants.com) or Gael Linn (www.gaellinn.com) - but it doesn't appear on either of their websites as of today's date.