There's Gangs of Them Digging
songs of Irish labour 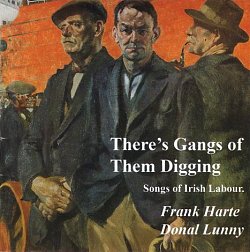 It was with great pleasure, and not a little surprise, that I received a copy of this, Frank Harte's latest and last CD, from his daughter Orla.

It would be usual for me to pass this on to another reviewer more versed in Irish singing than myself - but having played it once, I felt that I wanted to record my own views on Frank's singing, his politics, and this lovely record.  You may think that 'lovely' is an odd word to describe Frank Harte's singing, yet here he is almost tender in some songs.  Here's a clip from The Kerryman's Rambles to Tipperary

Most of the songs included here are fairly recent, since the great majority of them refer to the period since the start of work on the canals, then the railways, the dams, the rebuilding of Britain's war damage, and the large scale building projects of the late 20th century.  Necessarily then, they range from 19th century pieces, right through to almost the present day.  Accordingly, most of the more recent ones, having known authors, are not strictly traditional songs - although the styles are fairly consistent throughout, and you rarely notice the difference.

The first three songs precede the 'navigation' work, being concerned with the hiring fairs - two of which are worth mentioning in some detail.  Tambo is a rare Irish version of the English Billy Boy, while The Kerryman's Rambles to Tipperary is a surprisingly direct double entendre piece along the lines of I've Got a Warren.  We then move on to Paddy as Navigator on the American canals, then as miner in the Pennsylvania coalmines, and then to those in Scotland, with the well-known Blantyre Explosion.  The next two songs deal with the experiences of itinerant Irish farmworkers on farms in Scotland before moving on to the now well-known Do Me Justice, which deals with the anti-Irish sentiments these ex-patriots were subject to.

This brings us to track 10, and the more recent, composed songs; mostly about Paddy on the Buildings - Mickey Dam, Building Up and Tearing England Down, Hot Ashfelt, McAlpine's Crew, McAlpine's Fusiliers, Tunnel Tigers.  Most readers will, I think, be pretty familiar with these.

The last song on the CD was new to me; Murphy Can Never Go Home is a touching piece, written by Mick Curry, about the man who spends his life working in Britain, returning home now and again to brag about his wealth and success, but losing touch with his roots in the process - to the point when, wanting to return to Ireland after a hard life on the buildings, he finds he has no one to return to.  Also, Seán McCarthy's fine song about work on the buildings, Seán O'Halloran, is one which is seldom heard these days - so here's a clip of that.

Donal Lunny adds sensitive accompaniment (usually on guitar) to about half of the 19 songs and, perhaps surprisingly, I found no reason to quarrel with any of these additions.

The huge 44-page booklet is, to my eyes, a great improvement on those accompanying Frank's recent 'historical' projects.  His politics remain the same, of course, but here his comments are generally far more accurate ... I didn't notice him calling Britain 'England' as he often used to do!  When he comments that Irish labourers often clashed with British ones he acknowledges that it was often the case that they would work for lower wages than the locals - and even admits that there would be similar problems in Ireland itself with regard to itinerant workers.  I was surprised to learn that in Ireland in the Fifties the average wage was around Ł6 a week (it wasn't that much higher here), but that the Dole was only seven shillings and sixpence!  No wonder that so many young Irishmen came over to earn as much as Ł17 a week for the exhausting and hazardous work of rebuilding Britain after the war.  Frank's final paragraph runs:

In the nineteen fifties these men sent home Ł25 million every year ...  They were the men that kept the fires lighting in the homes in Mayo and Donegal and elsewhere.  They were the men that paved the way for the 'Celtic Tiger'.  Many of them at the present time are now wandering the streets of London and other cities, old and ill and neglected to a large extent by the government in their own country - the country to which they gave so much at a time when so much was most needed.

My only complaint about the booklet is with regard to what is actually one of its finer points.  Frequently the text is embellished with italicised quotations from people who were actually involved in the work being discussed.  Sadly, I can find no sources given for any of these often extremely illuminating quotations.

I'm so pleased that Frank's final record project should have resulted in such a fine and enjoyable CD - well worth adding to your collection.  The Daisy Label can be found at: www.daisydiscs.com