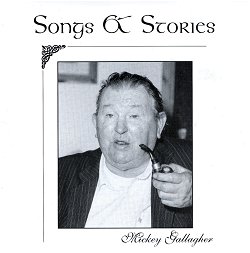 It was a very pleasant surprise to come across this locally compiled collection of songs and stories, especially from an area, Co Mayo, where publicly available examples of traditional singers and storytellers are thin on the ground.  Locally assembled compilations can vary widely in quality, particularly when local interest takes precedence over more general considerations, but this is certainly not the case here.

Songs and Stories consists of a single CD containing 11 songs, 5 traditional stories and one recitation.  The performer is Mickey Gallagher of Attymass, north east Mayo.  The CD is accompanied by a 56 page booklet containing texts of the songs and stories plus transcripts of recordings of Mickey talking about family and other local singers, songs, stories, folklore, music and dancing.  There are brief, but informative notes to all the recordings.

Here we have a good balance of the English-language song repertoire still to be found among traditional singers in Ireland up to fairly recently.  There are two Child ballads: The Parrot (Child 4) and You Lie Next to the Wall (Child 46), both with excellent texts.

The Anglo-Irish repertoire is represented by The Barley Grain and Willie the Sailor.  The native Irish songs are Flora of Drum, (sometimes known as The Blazing Star of Drung), The Way the World Goes, Cod Liver Oil and my own particular favourite of this collection, a very full set of the social misalliance song, Johnny Harte, which tells of a private soldier wooing and marrying a rich farmer’s daughter, despite parental opposition.  Also among the specifically Irish songs is the infrequently recorded Captain Colestone, relating how an Irish emigrant ship bound for America fights off an attack by pirates.

Another rarity is the bawdy, The Coachman.  This has been recorded only a few times in Britain, from Tom and Chris Willett and from Jasper Smith - all English travellers.  A version was also obtained from Norfolk singer Sam Larner.  To my knowledge, The Coachman has never been found in Ireland until now.

All but one of the songs are traditional, the exception being a self-penned, tongue-in-cheek piece entitled Killarney of Mayo, which extols the virtues of the performer’s home town and its residents.

Most of the songs are complete apart from Cod Liver Oil, The Parrot, Captain Colestone and The Barley Grain.  In each case, the editor states that the singer has full versions of these but has omitted them in the recordings used on this occasion.  The booklet gives the singer’s complete texts from previous recordings of Captain Colestone (an extra 4 verses), The Parrot (1 verse), and the bawdy last verse of The Barley Grain.

Mickey’s style of singing is that of the storyteller: basically narrative, tuneful but using little decoration, rather letting the stories of the songs unfold clearly for the listener to appreciate.  His is a good, robust delivery giving the impression that he is enjoying the songs and wants his audience to do the same.

All five stories are from the International folk tale repertoire and have supernatural elements including dragon-slaying, magical helpers, outwitting the devil, the grateful dead, cloaks of invisibility, etc.  There are two Jack type tales which involve the hero seeking his fortune; two concerning conflict with the devil and one which is related to the Rumplestiltskin story, but which turns out to be a warning to a husband-to-be not to work his future wife too hard.

They are told with a style and conviction which demands, and gets (from this listener at least) a suspension of belief that allows them to come to life in the telling.  Mickey’s down-to-earth approach and use of modern vernacular breathes life into the tales and is completely devoid of the tweeness and histrionics which are all too often the stock-in-trade of many revival storytellers.

I very much enjoyed Songs and Stories; however, I would like to make a few suggestions which I feel would have enhanced my enjoyment even further.

Traditional singers quite often use the same tune for a number of their songs.  In this case You Lie Next to the Wall and Killarney of Mayo are both set to the tune usually associated with The Innisillen Dragoon.  I feel it would have been better to place these two separately on the CD instead of one following the other, as has been done here.  I would also prefer to have had the songs and stories interspersed rather than in two separate blocks, thus providing greater variation for the listener.

As pointed out earlier, the transcripts given in the booklet were made from recordings other than those used on the CD, so there are a number of discrepancies between those printed and those included.  While I was grateful to get the full texts, I would have found it more practical if the editor had indicated these discrepancies in some way, perhaps by the use of italics.

The notes make tantalising references to other songs and stories Mickey Gallagher heard as a young man.  Did he know any of these?  I would have liked to have been given a full list of his recorded repertoire.

It would also have been interesting to have been given a little more information about the man himself - at least his occupation.  None of these points detracted in any way from the pleasure I got from listening to Mickey Gallagher, but I feel that attention to them would have made the production just that much better.

Songs and Stories is a ‘warts and all’ production; all the recordings were made in the local pub with the consequent background noises such as doors, telephones, creaking chairs, etc.  Nor have the compilers attempted to edit out coughs, pauses and slips from the finished product.  However, far from spoiling the listener’s enjoyment, this creates an impression of a relaxed atmosphere in which the performer sounds perfectly at home.

Songs and Stories is an excellent piece of work which adds much to our enjoyment and understanding of the oral tradition.  Joe Byrne and everybody else who worked to make these recordings available are to be congratulated on a job well done.

Most of all, we have to be grateful to Mickey Gallagher and all the other traditional singers and storytellers who have kept alive the songs and stories and passed them on, hopefully for another generation to enjoy.  In Mickey’s own words:

"We were always told to honour our father and mother and of course this means our grandparents and ancestors as well … We should try and take the best out of what they gave us and live it out and maybe pass some of it on to the next crowd or generation, if we can".

Other Titles in the Dreolin Community Series: