Women at Work in the Western Isles
Alan Lomax Collection 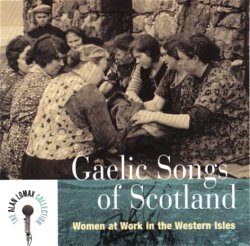 From Alan Lomaxís Hebridean odyssey in the summer of 1951 comes this selection of songs habitually used by women to accompany daily or seasonal toil: the tending of cattle, the carding and spinning of wool, the shrinking of tweed through the communal task of waulking.  All the tracks have been remastered from the original field recordings, made mostly in the islands of Barra, South Uist and Benbecula, with an additional two recorded in Glasgow from a Lewis singer plus one from a woman brought up in Moidart on the West Highland mainland.

This is wonderful stuff, full of grace and vigour and compelling rhythms.  Fifteen different voices across twenty-eight songs give an even richer mix than has previously been made available from Lomaxís classic collecting foray into the Gaelic heartland.  A few names will already be familiar to enthusiasts of traditional Gaelic song, e.g. Penny Morrison, featured in both the 1970 recreated waulking for the LP Music from the Western Isles in Tangentís Scottish Tradition series, and in Rounderís World Library of Folk and Primitive Music, Vol.III Scotland.  The latter, a CD reissue in 1998 of an earlier album of Lomaxís 1951 material, also included Annie Johnston and Mary Morrison on Barra and a group on Benbecula led by Mrs Fannie MacIsaac.  Kitty MacLeod from Lewis, revered within Gaelic music circles and a bit younger than the others, will also be known to some.  Only one track from the World Library volume (no.32) crosses over with Women at Work (no.36): here, itís a much fuller version of one of the exuberant clapping songs which, towards the end of a waulking, would improvise verses using names of those present and of any potential suitors.

The exact date and place of each recording are noted and you canít help wishing youíd been at Balivanich on Benbecula on 24th June.  Ten tracks, with six singers sharing the lead vocals, come from that day alone.  Audible too, on most of the tracks, are sounds of the work itself: the hiss of milk into the pail, the whirr of the wheel as the spinner sings, the steady pounding of damp cloth onto the wooden waulking board.  And the freshness of the whole production - the sense of being right there alongside the man with the microphone - is reinforced by the snippets of conversation, before or after many of the songs.  Kate Nicholsonís chant-like tones gently coax Rosie, her cow; Kitty Macleod gleefully remembers smuggling hens out to the summer shieling and waiting up to watch the midnight sun; Mary Gillies talks of the plants her mother used to dye wool.  And, fascinatingly, Annie Johnston recalls the time a few Mingulay men, storm-stayed on Barra, were pressed into taking a turn at a waulking by Maryís mother when the first team of women grew tired: Ď... she said she never heard nicer waulking songs than [from] these Mingulay mení.  Many men were bound to know the songs too but, so identified is waulking with the role of women that one wonders how exceptional was this event?  (In some emigrant communities in Canada men did take part in the Ďmillingí, as it was known there.)

Margaret Bennettís introduction summarises the crofting system which produced the particular landscape and community in which Lomax landed in 1951 and describes the role and importance of the cťilidh, literally Ďa visití.  There are also useful notes to many of the track listings, elaborating on the work processes or on the theme or style of a song; and a list of further reading is suggested at the end of the booklet.  The texts are transcribed and translated in full and care is taken to transliterate the meaningless - but structurally important - refrain vocables so that English speakers can more readily appreciate the inherent rhythms of each line.

I happen to know a little about some of the womenís links back and forth across generations of tradition-bearers.  There is a beautiful photograph of Mrs Archie MacDonald, Bean Eairdsidh Raghaill (the wife of Archie son of Ronald), who was much recorded by Calum Maclean for the School of Scottish Studies and whose daughter is Rona Lightfoot, noted Highland piper and singer.  Mary Gillies was the maternal aunt of Flora MacNeill, her influence acknowledged in the very first track note on Floraís CD Orain Floraidh (Temple Records, 2000).  To be fair, Highland genealogy can be complex and tracing every contributorís lineage would have made for very long sleeve-notes indeed!  But I find myself curious to know more about everyone and, in addition, into what social context their song lore fitted.  What other kinds of music did they know, or were exposed to even fleetingly?  for example, at school?  while working in service on the mainland in their youth?  from radio or gramophone or from visiting relatives or returned emigrants?

The notes state, rightly, that the way of life experienced by Lomax is now long gone but, at the time of his visit, changes were already gathering pace and, in any case, neither place nor people had ever been sealed off from the rest of the world.  Hydro-Electric power reached Lewis in 1951 and would be in Benbecula and South Uist by the mid-1950s, although not in Barra until a decade after that.  Many islanders would still have kept a milk cow but the moorland shielings were a memory for most, apart from in Lewis where the practice continued longer.  The hand-finishing of tweed by waulking, however, was no longer anything like so widespread as it had once been.  According to a study of the Harris tweed industry (Janet Hunter: The Islands and the Orb, Acair, 2001), the demands of wholesale customers for a finer, machine finish led to many island producers sending cloth away to the mainland from the mid-1920s.  The women Lomax met were of an age to have participated in waulkings in their youth, and in later years too occasionally, but it was no longer a regular event in every community.

Only two years later, in a paper to the International Conference on Celtic Folklore held in Stornoway, Calum Maclean stressed the importance of studying life and folk culture together and posed the question: ĎHow far can occupational songs have an existence independent of the occupations with which they are associated?í  In a conversation along the same lines with Lewis singer Mary Smith a few years ago, she mused whether they became Ďartí rather than Ďcraftí songs once separated from their activity.  Waulking songs, certainly, have moved to the stage and the recording studio and are a staple of bands and soloists on the popular ĎCelticí music scene - the vocable choruses and infectious rhythms make them appear more accessible, perhaps, to a broader non-Gaelic-speaking audience.  It is all the more crucial then that, through CDs such as this and in the written sources it cites, plus in a few fragments of film, we can understand the proper context of these songs.

This CD is thoroughly recommended.  For the folk who remember these women, at ease with a song culture ingrained in them since birth, it is a fine and fitting tribute.  For those who sing or enjoy Gaelic music there is nearly an hour of exhilerating, instructive listening.  And for those entirely new to the Gaelic worksong tradition, this is as near as you will get nowadays to the real thing.  Start here!