journeyman: n a hired workman, orig one hired by the day; a worker whose apprenticeship is completed; someone
who is competent at his trade; an electrically controlled clock or dial. (The Chambers Dictionary, 9th edition, 2003) 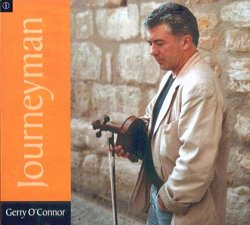 A generation of Irish musicians seems to be enjoying a second Spring.  One thinks, for instance, of fiddlers Maeve Donnelly, Brian Rooney and Nollaig Casey, accordionists Deirdre Collis and Richie Dwyer, and singers Jerry O'Reilly and Jim Mac Farland, all of whom have issued their debut solo albums in the last couple of years or so.

Now from that same vintage, the age group born in the 1950s and 1960s, comes the unveiling of the Dundalk fiddler Gerry O'Connor's first solo release.  Of course, unlike the others previously mentioned (with the exception of Nollaig Casey), Gerry's recorded output has been significant in quantity and, without fear of disagreement, its quality too.  His previous releases include 1987's Cosa gan Bhr¾ga and 1991's Lß Lugh, both recorded with his late wife, the singer Eithne NĒ Uallachßin, and the former with flute player Desi Wilkinson too.  Gerry and Eithne went on to release two further albums, Brighid's Kiss and Senex Puer, under the name Lß Lugh and then there is his contribution as a member of Skylark (with Len Graham, MßirtĒn O'Connor and Garry ė Briain) to the four albums which the band released during its ten-year career.

However, since Eithne's untimely death in 1999, Gerry has been publicly silent in recording terms, though he has continued to teach music, both in County Louth and further afield, and play the odd gig here and there too.

Journeyman, therefore, arrives as a welcome surprise, a much appreciated confirmation that O'Connor's talents remain unsullied, and a reminder that the man remains one of Ireland's premier fiddlers.  Gerry's fiddling incorporates both a tone immediately recognizable by its sheer plangency (in the 'ringing' and 'resonant' sense) and a bowing style whose flow at times seems unstoppable.

The album's title, of course, is self-deprecating, since there is nothing evident of the day labourer in this glorious collection and O'Connor is not merely 'competent', but a master of his craft.  Evidence of such permeates Journeyman in its entirety, whether it involves a rendition of The Star of Munster reel, so sublime in its rhythmic virtuosity, or includes the two airs in this collection, both of which reveal a musician who fully comprehends that the playing of such tunes entails an understanding of the singer's art.

Journeyman also uncovers a man keen to share the fruits of his musical travels.  So The Maid Behind the Bar set has evolved from Gerry's time spent in Cork city, Bonny Anne comes from Fermanagh's Eddie Duffy and Kitty the Hare derives from Connemara accordionist P J Hernon.  Then there is the significant element provided by tunes taken from the Donnellan Collection of Oriel Songs and Dances, first published in the County Louth Archaeological Journal in 1909 (and brought back to attention via the publication of A Hidden Ulster, a vital work by Gerry's sister-in-law, PßdraigĒn NĒ Uallachßin, which seems to have escaped public attention; Four Courts Press, 2003).

Gerry's tunes from Oriel (which includes parts of counties Armagh, Louth and Monaghan) include a remarkable highland, The Chicken's Gone to Scotland, delivered in a manner which embodies the tune's Scottish origins to extraordinary effect, and The Left-Handed Reel, from the closing set of tunes, played solo and in a manner which makes the listener just want to hop on a Dublin airplane, travel up to Louth and shake the musician by the hand.

His teaching skills are also pre-eminent on a set of tunes kicked off by The Day the Ass Ran Away, in the company of his son D¾nal.  There's a distinct Donegal edge to this set, thanks to the employment of octave playing, though also an unexpected harmonic interplay adds a notable twist to the plot.

However, Journeyman is very much Gerry's show and one whose excellence is reinforced by the care employed in the album's packaging.  The CD is housed in a gatefold Digipak sleeve and tune notes and sources are provided both coherently and informatively, with all appropriate credits.

Commercially produced magazines, such as fRoots or Songlines, make great play of their annual awards.  If Musical Traditions ever embarked on a similar scheme (and thank heavens it doesn't), there would be no doubt which CD would be accorded 'the best Irish album of 2004' - this one!

Journeyman is being distributed by Copperplate in the UK - www.copperplatemailorder.com   Gerry's own web site is www.gerryoconnor.net