Napoleonic songs from the French Wars to the present day 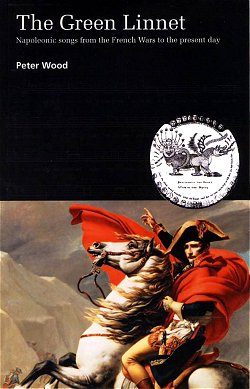 This slim volume (172 pages) contains a great deal of information - much of it of interest to ordinary readers of these pages.  However, if I'm counting correctly, Peter Wood includes some 186 songs, yet only 31 of them have ever been collected from the oral tradition.  It's perfectly possible to find a song with dozens of Roud entries, only one of which refers to the song in the mouth of an actual traditional singer!  Roy Palmer, writing in Street Ballads in Nineteenth-Century Britain, Ireland and North America, shows that, for example, William Pratt published some 561 titles over a 16 year period, yet only 18% of these songs ever made to into the oral tradition.  And clearly, there will have been many other composed songs which can be found in street literature's archives - copied from one printer to another, then appearing in books - which never appealed to 'the folk' at all, and so never featured in traditional collections.  The dreadful poetry and blatant jingoism of many of the Napoleonic songs detailed here make this no surprise.  If you don't mind, I'll stick to the ones that have actually entered the tradition.

Following an Introduction, the book is divided into ten chapters: The Revolutionary Wars, 1793 to 1802; Invasion Threat, 1803; Napoleon on the run, 1812 to 1815; The Battle of Waterloo; Waterloo songs - the romantic ones; The aftermath of war; The minor "grand sweep" songs; The Napoleonic Ballads; Long after Waterloo; Some conclusions.  In Chapter 1 we find The Sean Bhean Bhocht - not actually a Napoleonic song, but with its "The French are on the sea" verse, clearly pertinent.  The only other collected song is The Banks of the Nile, which again doesn't mention Napoleon, but is peripherally concerned with his Egyptian campaign.

We have to wait 'til Chapter 3 for another Napoleonic song from the tradition, Sandy and Nappy, a rare Scottish piece concerning Tsar Alexander and Napoleon, of which only two verses are given here, and it's not 'til we arrive at Chapter 4 and the Battle of Waterloo that we find ourselves on familiar territory.  Yet, even here, only four of the 33 songs included have ever been found in the oral tradition.  But there's a lot of interesting stuff here, including a refutation of Frank Kidson's assertion 'I suspect that all these ballads having Napoleon for a hero (in both senses of the word) have emanated from an Irish source ...'  Indeed it seems that many are actually Scottish, reflecting the fact that Scottish regiments were prominent during the battle.  This was the case with the nine-verse Poor Boney / The Eighteenth of June, only a fragment of which - from Henry Burstow - is well-known today.  It's a complicated story, but Peter Wood's conclusion is that it was composed in Scotland very soon after the event (details of the battle having been published in the Caledonian Mercury in early July) and published in an 1815 chapbook by T Johnston of Falkirk.  How Burstow's informant, James Shoebridge, heard and learned it whilst still in Belgium remains unclear.  Wood uses the tunes associated with the songs to help assess their provenance - The Bonny Bunch of Roses being a case in point - but doesn't mention that The Eighteenth of June is sung to the Irish air An Cailín Deas Cruite Na mBo.  I don't know whether this tune was well-known in Scotland at the time.

Chapter 5 - 'the romantic ones' - remains on familiar territory, starting with Her Mantle so Green and covering The Plains of Waterloo, Lonely Waterloo, The Bonny Light Horseman, etc.  Wood acknowledges that many of these may simply be pre-existing 'broken token' songs with Waterloo references added to enhance current interest and boost broadside sales.  What he doesn't mention - and what I would have thought was fairly relevant - is the wonderfully useful da-de-dah of the word Waterloo, stressed on the third syllable, and the almost endless rhyming possibilities of the 'oo' sound.

Chapter 7 brings Henry Burstow to the table again with Boney's Lamentation - seemingly he was the only singer of this splendid song, set to a very fine version of the Princess Royal tune.  Chapter 8 starts with The Bonny Bunch of Roses, the most popular Napoleonic song in the canon, with some 177 versions found in the oral tradition.  I fondly remember Frank Harte being astonished to find that we had any Napoleonic songs at all in England, so I'm rather glad that he's not around to discover that The Bonny Bunch of Roses and The Grand Conversation were written by an Englishman!  Yes, it now seems fairly widely accepted that these two great songs (and some 20 others) were written by one George Brown for the London broadside printers W Taylor and Hillat & Martin, and published around 1837 - albeit with some motifs and lines taken from an earlier Irish broadside.

The Dream of Napoleon also seems unlikely to be Irish - only one Irish singer amongst 24 Roud entries - likewise Napoleon's Farewell to Paris - very few Irish broadsides and no named singers.  The Isle of Saint Helena also has a known composer - this time a Scot, James Watt of Paisley - and it's not 'til we get to The Green Linnet (and two thirds of the way through the book) that we encounter a song that is incontestably Irish.  Which rather encourages me to ask why on earth Peter Wood chose this as the title for a book with so little Irish content?

I hope you'll forgive me if I don't go into much detail regarding the last third of the book, which contains a number of Napoleon songs composed more recently and, with the honourable exception of Mark Knopfler's excellent Done With Bonaparte, seem to me to be of very little merit or importance.  The final Conclusions chapter is really much more of an overview of what's gone before, and doesn't appear to arrive at any particular conclusions.  It does, however, deal briefly with the fact that while parts of French society still revere Napoleon, they have almost no songs about him.

So - a good book about an interesting subject, but one which didn't tell me all that much that I didn't know already ... except for the Scottish provenance of a good number of the 'battle' songs.  However, there's more to a book than the information it contains, and I can't get to the end of this review without commenting on the book itself.  Commercial book publishers spend a good deal of money employing editors, designers, proofreaders, etc, and the purchase of high quality software.  Self-published books don't have these resources, and so their authors should attempt to do the work themselves.  If they do not, almost every page will contain some small niggle to distract the reader from his/her enjoyment of the content.  I'm afraid that this is the case here.  Little thought seems to have been given providing the reader with a smooth path through the large amounts of data provided, and I might guess that absolutely no spelling or grammar checking has been done.  Clearly parts of the text have been acquired via some inexpensive Optical Character Recognition software, and exhibits the usual OCR results: 'rn' becomes 'm'; the letter 'l' at the end of a word becomes the number '1'; and one I've not seen before, a hyphen becomes a '¬' (that's a NOT logic symbol).

I could go on listing problems, but that would be needlessly unkind to an otherwise good and valuable piece of work.  It's available directly form Peter Wood at: peter@pwood49.fsnet.co.uk   But, if there are any other intending self-publishers reading this - Beware!