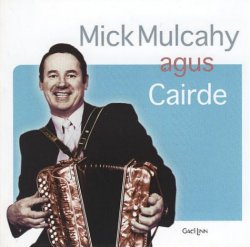 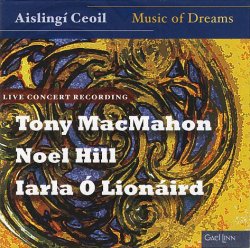 Here we go again - two more 1990s LP-length CD re-releases from Gael Linn ... though the press blurb makes no mention of this, and you need to read the disc label to see the 1990 and 1993 initial release dates.

Wishing save the time taken in scanning the cover graphics and, more importantly, to avoid any spelling mistakes or missing a fada through OCR processes, I went to the Gael Linn website to get this data ... or tried to.  The website www.gaellinn.com, as printed on both discs and their inserts, doesn't exist.  Google informed me that it's actually www.gael-linn.ie   I entered this ... and waited almost a minute for their Home page to display - only to find that neither CD exists within their Search routines.  Ah well - what about the music?

As anyone who owns the original Mick Mulcahy LP will tell you, he's a fine box player, and Joe Rynne's fiddle works well with him.  Mick O'Connor suits me better as a banjo player than a guitarist and, for the most part, I could have done without Mel Mercier's bodhr·n and bones - but this was the 1990s!

In both the insert and the blurb, this recording is described as a session, though there's no indication of the order in which the tunes were recorded.  Nonetheless, it feels as if the record reflects the session fairly accurately - which starts with a fine rendition of the reels Woman of the House, Mrs Crotty's and Craig's Pipes but gradually begins to feel a bit tired as the tunes roll by, and sounds as if they're going through the motions by the time we get to the end.

Being a Nineties product, it's mostly reels and jigs with the thinnest sprinkling of other rhythms (polkas, hornpipes and slides) to lighten the mixture.  All in all, whilst not wishing to be over-critical, I didn't feel it lived up to its initial promise.

The Tony MacMahon, Noel Hill and Iarla ” Lion·ird disc is a very different beast - and is actually a live recording of a performance the three of them gave in Dublin in October 1993.  There is dancing taking place on many of the appropriate tracks - and lots of whooping and cheering on others.  Given the status of the three performers, it would be superfluous of me to describe their technical prowess ... I only wish I could like it much!  I see that the words 'performance' and 'performers' have already occurred twice in this paragraph, and that seems appropriate as this is (despite the social aspects of the gig) very much an 'art-as-object' presentation.  And how the title 'Music of Dreams' relates to most of these offerings, apart from Aisling Gheal, perplexes me entirely.

I most enjoy the tracks (or parts of the tracks) where Tony MacMahon is playing his box solo, or where Noel Hill's concertina takes a subsidiary role.  I can marvel at Hill's dexterity - without enjoying it half as much as the crowd seems to.  But Iarla ” Lion·ird's singing leaves me cold - and wishing that I could murder John Gibson and his piano accompaniments.  To be fair to the man, Mr Gibson is obviously a fine player, and I should blame Peadar ” Riada for composing the awful arrangements.  Yes, West Cork sean nÛs with piano accompaniment!  This is what can happen when traditional music gets to be popularly acceptable!

If your 30-year-old LPs are too scratched for comfort, you might want to buy these CDs - otherwise I can't find it in me to recommend them.