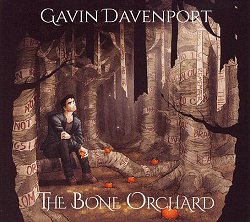 Like the recent Sam Lee album, this one is likely to be a popular item amongst the new audience for 'Young British Folk' - and for many of the same reasons.  The song accompaniments are lavish and complex - indeed, 'accompaniments' is a misnomer; they sometimes seem to swamp the song entirely, making Gavin's prodigeous vocal efforts almost irrelevant.  And 'prodigeous' is an accurate description - I've rarely heard anyone sing so forcefully ... and yet, for all the noise, not too much of the meaning of the songs seems to escape the speakers.  This is, at first sight, quite the opposite of the Sam Lee album, where I felt that Sam was relying too much on the backings for the emotional impact of the songs.  Here Gavin is giving it his all, emotionally - yet I don't find the story of the songs is coming through.  Each piece seems like a complicated and carefully constructed artifact, yet its purpose - unless it's simply to impress - remains unclear.  Here's the end of track 1, Whitby Lad

The Press Release tells us that 'Davenport is careful to ascertain that The Bone Orchard is a compendium of songs set in the now' - whatever that is supposed to mean - but I suppose that it's the old 'relevance' argument again.  I've never understood why so many revivalist singers have seemed to be so concerned that these old songs can't possibly mean anything to today's listeners.  They were created by human beings, weren't they, and have been accepted and sung by other human beings down the years and passed from generation to generation.  They deal with life, death, love, heroism, betrayal, longing ... how can they not be relevant to other human beings?  No, the difficulty is not how to make them relevant, but to understand precisely why they're relevant to you, and then to find a way to convey that to your listeners.

Interestingly, the Press Release seems to express something of this: 'It is often in unaccompanied song that listeners gain the full effect of strong, honed vocals which push and pull in all the right places ... the listener has nothing to do but take it in'.  So why waste all that effort on such lavish backings, which only serve to obscure that 'taking it all in'?

Part of Davenport's attempt to set the songs 'in the now' is evidenced by his considerable re-writing of songs and tunes.  There's absolutely nothing wrong with that of course, but I rarely feel his efforts have much improved the songs, and almost never the tunes.  To be particular; Mick Slocum wrote an absolutely splendid tune for Jim Jones, yet Gavin (despite citing The Bushwackers as a source) has completely eviscerated it.  Similarly, I'd have thought that Joseph Taylor's tune for Creeping Jane would be good enough for almost anyone ... but not for Mr Davenport, it seems.  Yet I don't imagine too many singers will feel that they'd rather use his dull flattened-out version.

I'm also somewhat surprised at his choice of versions of songs to sing.  As an example, his [The High] Banks of Yarrow - the Motherwell version of Child 24, Bonnie Annie or The Banks of Green Willow.  Now this can be an absolutely wonderful story that really ticks all the 'big ballad' boxes - except for a talking bird!  Yet the Motherwell version is slim in the extreme: Squire gets girl pregnant, she steals her parents' money and they set sail.  She has a baby on the ship, lamenting the lack of women's help, she's thrown overboard, she swims away, he buries her in a golden coffin, the end!  Where's the magic?  Where's the drama: the sails full "yet miles they made not any"; the storm; the ship not responding; the fey folk; the black bullets; the "better two lives than so many"; the storm's abatement; the bells rung softly?  However, what is sung here is not the Motherwell version, but something loosely based upon it.  Unfortunately, we dont get any more of the story - instead, we get some rather PC verses about women being more capable than men.  Does that to make it more 'in the now'?  Further - given the comments about the 'full effect' of unaccompanied singing, it also seems strange that he's chosen to add Jim Causley's harmony to this track ... which, while very pleasant, does nothing but distract from the essence of the ballad - the story!

In the other songs I'm very familiar with, Long Legged Lurcher Dog and Bold Dragoon, the former is Bob Roberts' friendly, soft version of the taught, hard tale told by Gypsies - who understand the story.  The latter is a little better in terms of the actual singing being convincing - if it were not for the story being interrupted twice by long instrumental passages.

If you enjoy the sound of lots of instruments playing complicated (and impressive) arrangements, then I imagine you'll like this CD; if you like to hear traditional songs performed as if they actually mean something, and to get an idea of what they do mean to the singer, then I fear you may be very disappointed.