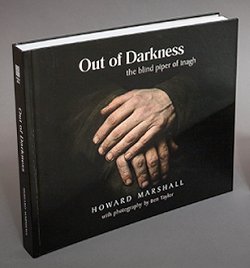 The west Clare piper Garrett Barry has lived i mbéal an phobail for over a century … until now.  I mbéal an phobail is a common Irish language expression used to highlight the significance of historical events and characters that survive in oral memory and it translates literally as: 'in the mouth of the public'.  Barry has finally found a formidable ethnobiographer in Howard Marshall, whose book Out of Darkness: The Blind Piper of Inagh comes at time when long-term memory appears to have reached an all time low in many western cultures.  Investigating the life and lifeworld of Clare's most celebrated nineteenth-century piper, this interdisciplinary work shines a welcome light on the rich reserves of oral postmemory that lies at the heart of rural culture in the West of Ireland.

Living beyond the remit of the political historian and the statistical gaze of the Crown chronicler, Garrett Barry's biographical details are sparse and elusive.  Born in the townland of Kylea, under the misty shadow of Mount Callan in 1847 … the apocalyptic Black '47 of the Great Famine … he contracted small pox as a child and spent the remaining fifty years of his life blind.  Marshall argues convincingly that Barry more than compensated for his lack of vision by developing extraordinary auditory and musical skills that made him a Promethean figure in Ireland's traditional soundscape and a compositional reference point for dance music that is now performed throughout the world.

The opening chapters of Out of Darkness proffer a historiographical critique of pre and post-famine Clare and the manner in which this Lebenswelt, or lifeworld shaped the destiny of the young piper: the demographic transformation of rural communities, landlord tenant relations, agrarian violence and inter-denominational conflict, educational change, cultural and linguistic schisms exacerbated by the onslaught of famine, death and diaspora.  Weaving a path between empirical history and ethnographic memory, Marshall nimbly develops his narrative within the spatial seanchas and dinnsheanchas of mid-west Clare … focusing on the bardic longevity of the Mac Crúitín poets; in particular, James MacCurtin, whose hedge school in Cloonanaha may have been the site of Barry's education, the 'walking distances' that marked Barry's musical journeys, the house dances he attended, the landmarks he celebrated in his music, the Otherworld of fairies and changelings he encountered within the solitude of his blindness.  Barry occupies all the key nodal points in this 'thick descriptive' synthesis, (to cite anthropologist Clifford Geertz).  He is a constant point of departure and point of return for the natural, as well as the cultural and political history of his own place, from climatic observations, pattern day rituals, and calendar customs, to radical revelations about local Fenianism, Land League agitation, and Home Rule politics.

Chapters three, four and five act as critical segue ways between the historical figure of Barry and his long afterlife, or postmemory, as an Irish piping icon.  At this key juncture, Marshall dovetails and expands his ethnobiography into a broad organological discussion of bagpipes in Irish music history and the seminal place of uilleann pipes in the music history of Clare, especially since the revival of Clare piping by Seán Reid and Johnny Doran in the late 1930s.  A longue durée history of piping in Ireland, Scotland and England prefaces a series of micro histories of renowned pipers and pipe makers (Kenna, Egan, Moloney, Taylor, etc.), and the emergence of 'union pipes' in late eighteenth-early nineteenth century Ireland.  Tracing Garrett Barry's piping apprenticeship within this broad historiography proves challenging and nebulous.  Doubts and ambiguities aside, storytellers did not fail to pepper their anecdotes with pithy local heroics and colourful descriptions of Barry's triumph over adversity … not least, his ability 'to best' certain jealous mentors.  It is unclear whether he was trained in Clare or Kerry, however, his calling was most likely inherited from his mother's family, the Hehirs, who were regarded as good pipers.  It seems he was well on his way in his late teens and, as he reached adulthood, he took to the roads of west Clare as a traveling piper … a profession, (like that of the traveling poet, street-singer and dancing master), which was widespread throughout the West of Ireland in the half-century before the Great Famine.  Barry's patrons extended from Inagh in the east to Ennistymon, Miltown Malbay, Mullagh and Quilty in the west along the Atlantic shore.  His presence at a house dance was considered an honour and people vied with each other to host him.  He was usually received in 'the room,' or parlour, where he entertained family elders with piping pieces, seanchas, and songs of which he had a formidable store in English and in Irish.  By his own admission, his music was not for the feet but for the soul.

While framing Garrett Barry's life within the context of Land League and Home Rule politics, the pre-famine temperance movement and post-famine liturgical revolution, chapters five, six and seven highlight the passage from direct memory to indirect postmemory of the piper and his times.  This transition saw the crucible of remembrance pass from direct witnesses like Gilbert Clancy, Tom Charlie Talty, Nell Galvin, Joe Bourke and Thady Casey to successor generations of Clancys, Crehans, Barrys, and Lenihans.  Radio too was a key catalyst in harnessing this oral reserve … not least through the work of broadcaster Ciarán Mac Mathúna who began recording recollections about Garrett Barry from west Clare informants by the late 1950s.  This interest peaked in the 1970s after the founding of Na Píobairí Uilleann and the establishment of Scoil Samhraidh Willie Clancy.  A half century later, Barry remains a constant and audible figure on festival stages and in music sessions across the world where tunes like Sruthán an Chait, Garrett Barry's Jig, and I Buried My Wife and Danced on Top of Her are part of the popular repertoire.

Although Out of Darkness finds its primary expression in text, it also goes beyond text to visually portray the material culture and heather-clad vistas of mid-west Clare with photos of old-style pubs and kitchens, farmhouses and streetscapes, archaeological artifacts and blanket boglands; the latter, a topographical signature of the region.  Historic black and white photos from the Lawrence and Francis O'Neill collections are supplemented by superb colour prints from contemporary British photographer Ben Taylor, whose work adorns the text throughout.

Rounding out this audiotopic study is an exemplary set of appendices that feature the tunes and songs of Garrett Barry, as well as a detailed bibliography, discography, online source listing, and supplementary materials … among them, interviews, radio programmes, and music collections.  If the size and weight of this opus may confine it, (at least physically), to the coffee table and the library shelf, the sheer depth of the musical palimpsest it unveils merits a prime spot in all serious readings of Ireland's traditional soundscape.