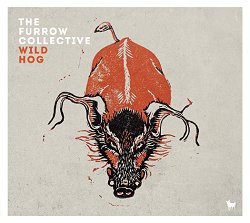 The Furrow Collective is an English/Scottish quartet, formed in 2013, drawn together by a shared love of traditional song and balladry, and consisting of four distinctive performers - Lucy Farrell (fiddle, viola, voice), Rachel Newton (harp, fiddle, voice), Emily Portman (banjo, concertina, voice) and Alasdair Roberts (guitars, voice).  On this new CD they are joined by Alex Neilson on drums and Stevie Jones on double bass.

Although we've known Emily Portman and Lucy Farrell for a few years, Danny and I first heard The Furrow Collective only last year at a local gig.  We just loved them, as we thought we would - but were astonished by something most unexpected.  Their first set contained some 7 or 8 songs which, although we knew them all, were in versions we'd never heard before.  And since we've listened to traditional songs for some 50 years, this was quite a feat - and a wonderful surprise!  That gig was with just the four of them, and I don't think that the instrumental backings to the songs were quite as developed as they are on this CD, and of course, they were without the bass and drums.  I think I preferred that leaner sound to what's presented on this CD - as you might expect I would - but only by a little.

This is a great little (48 minutes) CD, containing some very interesting songs ... all beautifully performed.  The accompaniments - even with the addition of the bass and drums - don't unduly distract from the singing and the story.  And these are all 'story' songs.

Wild Hog in the Woods is a version of Sir Lionel or Bold Sir Rylas (Roud 29, Child 18) that Alasdair Roberts learned from a recording of Eunice Yeatts MacAlexander - seemingly exactly like the one on MT's Far in the Mountains, vol.1.  I first heard this song from Peggy Seeger at the Singers' Club in London, back in the early-60s, and I still miss her wonderful "Ky-moniero, kitty-kum kiero" chorus.  Alasdair does a good job of not sounding too American on such an Appalachian piece; and Emily's banjo really helps to set the tone.

Dear Companion: Lucy got this song from Jean Ritchie.  It appears in her book Folk Songs of the Southern Appalachians, where the notes read: "This is our family tune, and the words are ones common in my part of the country, with the exception of the last verse which I began singing a long time ago when my 'true love' took another girl to the pie supper!" - perfect!  It seems to be a close relation to Go and Leave Me (Roud 459) which Percy Webb used to sing so well, though this 'Fond Affection/Dear Companion' family of songs is almost entirely comprised of floating verses, and it's difficult to know which is really related to what.  Lucy sings it well, with a good feeling for the pulse of the song, against a quite spooky backing.

Prince Heathen: Rachel learned this version from the singing of Seonag NicCoinnich, and it has a refreshingly different feel to the Martin Carthy version so frequently dragged out at enormous length by many revivalists these days.

Barbara Allen: Emily got this from Elizabeth Cronin's recording on Topic's TSCD673T, although she's added the last two verses from those of a version collected by Cecil Sharp from Jim and Francis Grey in 1906.  This leaves Barbara's fate open as she walks away from her lover's death, rather than the usual dying of a broken heart and the 'rose and briar' ending slipped in from the Lord Lovel songs.  Sorry - but for me, this seems to be only half the story!

Willie's Fatal Visit: This ballad, sung by Lucy, is a bold choice for a young(ish) singer - and not one I've heard on the lips of any other revivalists, except for Ray Fisher, who learned it from Lizzie Higgins.  Lucy sang it unaccompanied in the gig we saw, and it was just mesmerising!  She used no obvious vocal tricks except free rhythm, but still managed to demand her audience's attention ... she just 'told' the story in an almost conversational way that seemed to me to be quite unique.  Here the accompaniment ties her to a strict tempo that I was continually wishing her to break free from.

Many's the Night's Rest a.k.a. My Bonny Boy (Roud 293) is an unusual song, which Steve Roud classes as a version of The Grey Hawk, although I'd have thought it deserved its own number.  Emily's version here is quite close to the lovely Daisy Chapman one (MTCD308), and has an equally gorgeous tune.  Emily stumbled across this Sussex version in amongst Lucy Broadwood's manuscript collection included in the Journal of the Folk-Song Society from 1905.  Emily was struck by the resolute tone of the chorus: "Many's the night's rest you've robbed me of, but you never shall do it again" which is mirrored by Daisy's "For mony is the lang nicht he's rowed me in his airms, but I'm gey weel sure he'll never dee't again".

Chuir M'Athair Mise dhan Taigh Charraideach: A waulking song from the Isle of Skye, 'Chuir M'Athair Mise dhan Taigh Charraideach' is a verse from the lament Seathan, Mac Righ Eireann (Seathan, Son of the King of Ireland), to be found in volume 5 of Alexander Carmichael's 19th century collection of Hebridean folklore Ortha nan Gaidheal.  Rachel's version here is quite a way from the recordings of traditional waulking songs that I've heard, but it's still absolutely gorgeous!

Polly Vaughn: Lucy learnt this song from the singing of the great Harry Cox, who called it The Fowler.  Mecifully, it's sung here in free rhythm, and with (possibly) even more of the melodic twists that Harry used.  This is very skilled singing indeed - it's difficult to believe that you've been listening to it for almost seven minutes - superb!

Queen Eleanor's Confession: This version was learnt by Alasdair from one sung by the Glasgow group The Exiles - of belovèd memory.  Eleanor of Aquitaine married King Henry II of England in 1152; this ballad narrates a particularly dramatic episode involving them both along with William Marshall, First Earl of Pembroke, although it is unlikely that anything of the sort actually happened.  This ancient tale has been used often over the years, turning up first as an anonymous 13th century French fabliau entitled Du Chevalier qui fist sa femme confesse.  Don't be surprised at that; so many of our monarchs have been French - and all of our monarchs have been foreign!

The Maiden Hind: Chris Coe taught Emily the Danish ballad of The Maiden Hind and it was Chris, along with Pete Coe, who composed the melody.  The Danish original is entitled Jomfru i Hindeham and it was translated into English by Eleanor Mary Smith Dampier in A Book of Danish Ballads (1939).  Child draws a connection between the Danish song and the ballad of Leesome Brand (Child 15).  Emily adapted the rhythm into 5/4 time, for which she is particularly partial!

Beneath the Window of My Cell: This is a very rare song; Ewan MacColl and Peggy Seeger published it under title of The Prisoner's Song (no 99 in Travellers' Songs from England and Scotland).  Few other traces of the song seem to exist, but it may be related to one called The Swallow in My Prison Cell, as recorded from Willie McElroy of Co Fermanagh, Ireland in 1977.  This version was learnt by Alasdair from the singing of the late Sheila Stewart, who in turn learnt it from Christina 'Teeny' McAllister in the berryfields of Blairgowrie in the sixties.  You can hear it sung by Teenie on the CD-ROM of the book Travellers' Songs from England and Scotland (MTCD254).  Alasdair sings it much as, I imagine, Sheila did - and the use of the bowed bass is very effective here.

This last song may be a very bleak way to end a CD I suppose - but this is by no means a typical 21st century release!  Bravo to The Furrow Collective for having the guts to go for something so different, and for showing me that my continual moans about no one caring for real traditional songs any more are not completely true!