This book is made up of papers delivered at an international conference on Folksong: Tradition and Revival, organised by the National Centre for English Cultural Tradition at the University of Sheffield, to celebrate the centenary of the founding of the Folk Song Society in 1898. 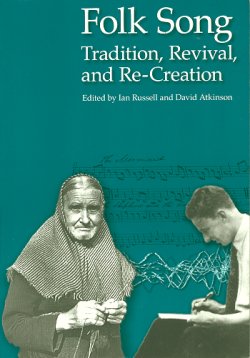 Ian Russell was one of the organisers.

The chosen themes were: Revival of Folksong (UK or international), History of Folksong, Scholarship, Women Collectors, Studies of Individual Songs or Singers, Melodic Tradition, Group Traditions, Folksong in the Modern World, and the Future of Folksong Research.  I happen to know all this because the inital 'call for papers' was published by MT in our very first News page!

What is interesting is the difference between the official title of the conference and its chosen themes, and the resulting papers as selected and published in this book.  Because, whilst this is undoubtedly an interesting book, its title is grossly misleading.  One ought not, I think, to have to read to page 121 before one encounters an actual British folk song being discussed, rather than merely being mentioned in passing.  Nor might one expect that slightly more than half of the book deals either directly or indirectly with the collectors - rather than the tradition, or the singers, or the revivers, or the re-creators.

Before continuing any further I must come clean and admit that I didn't read all of the book's 555 pages; 9 of the 36 papers deal with foreign traditions, or solely with collectors, or with subjects for which I couldn't raise any enthusiasm - 'so much to do - so little time', I'm afraid.  However, I did struggle through the remaining 27 papers, and I have to report - as you might expect with something of this size - a very mixed lot they are, too.  Obviously the items which interested me may not interest you, but I would venture to say that there's probably something for almost everyone here.

Much to my surprise, the Introduction - by Ian Russell - is interesting; not that I doubt Ian's ability to be interesting, but because Introductions so often aren't.  But in just eleven pages he manages a quite detailed description of the 36 papers, and a little comment as well.  A good start.  Vic Gammon follows with 100 Years of the Folk Song Society, which is really more an account of the two Revivals and a discussion of the status of folk music and its associated Studies, today.  Vic writes well, as you doubtless know, and his comments and ideas as expressed in the 'staus' section are well worth reading.

I didn't read through the book as presented, but picked out likely looking papers first before tackling the rest.  Accordingly, I turned next to David Atkinson's Revival: genuine or spurious.  This fascinating and complex piece of writing has at its core (I think!) the idea that traditional singing as a process - 'the tradition' - is located in an individual's conscious decision to engage in an emotional relationship with other people, but expressed through cultural forms, and across time.  Needless to say, the idea is developed from the work of many other academics, and David's argument is both convincing and refreshing - even if it may not appear so when baldly stated like this.  I do have one criticism though - one which often occurs in such writings - the continual use of a jargon word which may well be unfamiliar to the reader/listener.  In this case it's 'affective', which I could only find in the two-volume Shorter Oxford English Dictionary, and means emotional.  A perfectly good alternative, I'd have thought - so why not use it?

Then there's a very interesting paper by Chris Heppa entitled Sam Howard and the east Norfolk singing tradition, which I enjoyed hugely - particularly because I've heard some of E J Moeran's recordings of some of the actuality he uses as examples.  This is great, and it's actually about the singing and the people who did it - if only more of the book had been the same!

Sadly, not everything was of the same standard, nor at the same level - which leads me to question just who the Conference was aimed at, and/or who the editors had in their minds as potential readers?  Let me give just a couple of extreme examples.

Andrew King conducts A thematic reconsideration of the textual ancestors of 'The Bitter Whithy'.  In the course of this he refers familiarly to 2nd century Apocryphal texts, Vulgate texts, Syrian and Arabic texts from the 4th and 5th centuries, and quotes long sections of middle English - without translating them.  Clearly, he was speaking to an audience with an education way, way beyond mine   And, (although I have to applaud him for his attitude to single and double quotation marks) I rather wonder exactly what knowing about these 'textual ancestors' may have to do with singing The Bitter Whithy any better than you did before?

At the other end of the scale, we have Robert Burns with British folk songs in popular music settings.  Mr Burns is a lecturer on contemporary music at the University of Otago, New Zealand, and he spends 15 pages explaining that Bob Lewis' singing of The Spotted Cow is rhythmically more free and irregular than is Steeleye Span's version!  This astounding contention is supported by wave display diagrams, staff notations and stressed word charts - just as well, I never would have believed him otherwise.

Exactly how many of the Conference's audience would have been able to sit through either, let alone both, papers in mental comfort, I cannot imagine.  Nor, it seems to me, are either of them at all well-suited to the rest of the company they keep in this book.

But, as I said earlier, an interesting book, containing some extremely good pieces.  A pity, in my view, that it contans so little about the 'folk songs ... and their re-creation' which its title has led you to expect.