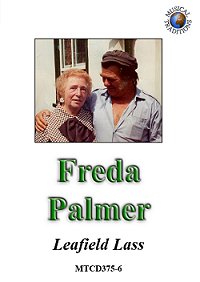 CD 1: Up in the North;  Daughter of Shame;  A Miner's Dream of Home;  Eighteen Pence;  The Fox and Grey Goose;  Home Sweet Home;  Old King Cole;  Oh What has Changed You;  One of Our Streets;  Put a Bit of Powder on it Father;  The Week Before Easter;  Chick Chick Chicken;  Break the News to Mother;  Billy Brown;  A Little Bird built a Nest;  The Mistletoe Bough;  I Parted My Hair in the Middle;  Teddy O'Neill;  A Frog he Would a Wooing Go;  As I Was a Walking;  Father's got a Job;  The Titanic;  The Wandering Girl;  If Those Lips parody;  The Dumb Maid.
CD 2: The Banks of Sweet Dundee;  I Wish I Was Single Again;  Little Cock Sparrow;  Young Folks Old Folks;  Three Jews from Jerusalem;  After the Ball;  Old Johnny Bigger;  The Bailiff's Daughter;  Jack and the Squire;  Villikins and Dinah;  The Little Shirt me Mother Made for Me;  A Man that's Done Wrong;  Mother Caught a Flea;  Your Faithful Sailor Boy;  Good Company;  What did You do in the War Daddy?;  Needle Cases;  A Group of Young Squaddies;  I'll Sing of Martha;  Oxford City;  The Ship that Never Returned;  Maria Marten;  Old Mammy Mine;  The Ship I Love;  The Warwickshire RHA;  William and Mary;  Young Williams;  Hitler's Dream;  Murphy's Little Girl;  The Orphan Girl;  A Dialect Story.

I cannot remember when I enjoyed an album of traditional singing, as much as I have enjoyed Leafield Lass.  That is quite a sweeping statement, when one considers the amount of material available to the avid listener, however it holds true for me.

Freda Palmer was born at Leafield Oxfordshire in 1908.  Cecil Sharp was hard at work, and visited her native Oxfordshire from the turn of the 19th century until 1922.  Other collectors inspired by Sharp were knocking on doors in search of the old songs at that time.  That said, it is a sobering fact that the self imposed brief held by the Edwardian collectors as to the nature of Folk-song, would have demanded that they virtually ignore Freda Palmer had she been singing in those far off days.  There are only a few traditional songs included here that would have passed the arbitrary test imposed upon a singer by Sharp and his contemporaries, and even unfortunately in the early days of the second Folk Song revival.  No such prejudice affected the collectors in the 1970s when these recordings were produced.

Alison McMorland, Mike Yates, Steve Roud and Gwilym Davies are the contributors to this double CD collection of fifty six songs and recitations.  There are copious notes and references which supplies all the information that any reasonable folk song enthusiast could wish to read, and the quality of the recordings is excellent.

Freda Palmer was a glover in her youth.  This in itself is no real surprise, as gloving was the accepted cottage industry in the 19th century and up to the first world war in many English counties; however Freda was a glover for a lot of her adult life, with other members of her family.  It is quite surprising how many female singers were glovers.  The list includes the prolific Victorian singer Marina Russell of Upwey Dorset (with whom Freda shares a song).  Cecil Sharp was constrained to comment that "... the glovers were also great singers until the invention of the sewing machine."  Freda Palmer and her mother give lie to that observation and both continued singing despite the introduction of the sewing machine, and that is to our benefit with this fine collection.

The songs range from traditional folk Songs (Up in the North, The Fox and Grey Goose, The Banks of the Sweet Dundee, The Week Before Easter) through to Music Hall songs, later composed pieces (The Faithful Sailor Boy, The Mistletoe Bough) and what a delight to hear Eighteen Pence, a version of which I collected in Dorset in the nineteen eighties.

Mrs Freda Palmer left us in 1991, but in her heyday she must have been a controlled, able and inventive singer.  Recorded here, in her late sixties she still maintains a lot of that skill, which can come as a genuine surprise as the songs unfold.  The unbridled and agreeable ribaldry of Old King Cole (which left collector Alison McMorland helpless with laughter) is followed by her rendition of The Week Before Easter, the alteration in approach shows Freda's skill, understanding and consummate ability as a singer.

The late Bert Lloyd was always one to turn a phrase when needed.  Bert referred to the singer who would "Vary the psychological climate of a song with alteration of pace and nuance", and so we see from Freda Palmer; she produces a lighter approach, and alters the production of her voice, and achieves a clear melodious vocal tone with breath control that would be the envy of many a revival singer.  Her Music Hall repertoire and rendition of songs that can be traced to a composer, shows an agreeable synthesis between the tradition and the influence of their professional performance.  Those songs are none the worse for that.  It is obvious that Freda Palmer knew exactly what she was doing and why.  These abilities are second nature to the traditional singer, and may take a lifetime to assimilate by those singers who were not born to the songs.  I am reminded by the Gypsy singer who turned to me in amazement and said "You can hear all that in my old singing!"  Yes we can hear it, if we care to listen, and listen we should by adding this double CD to our collections.