That Far Away Land

With This Ring; My China Doll; Mother the Queen of My Heart; Jimmie's Mean Mama Blues; That Silver Haired Daddy of Mine; Irish Hornpipe; Mexicali Rose; Into Each Life Some Rain Must Fall; Rattlesnakin' Daddy; All for the Love of a Girl; Gamblin Polka Dot Blues; I Want You to Know I Love You; Traditional Reel; The Hobo's Meditation; Someday You'll Call My Name; Winchester Cathedral; Now and Then (A Fool Such as I); I Get the Blues When it Rains; Bucket's Got a Hole in It; Daydream; Traditional Reel; There's no Room in My Heart (For the Blues); With Tears in My Eyes; This Song is Just For You; That Beautiful Land. 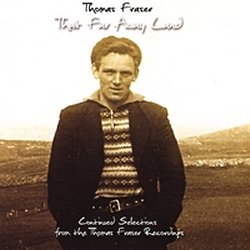 The review already published in MT of the previous three discs of Thomas Fraser’s music says most of what I have to offer about this remarkable man and his art, and if I have little to add to that in terms of general appraisal, that isn’t to say that this selection is any less interesting than its predecessors.  Bringing to a total of 100 the number of tracks now rescued from those almost forgotten tape recordings and issued on CD, it’s another very satisfying collection of Fraser’s intense, distinctively lived-in performances.

It’s perhaps a little more varied that the previous discs, including a few surprises - alongside the Jimmie Rodgers songs (notably a lovely Gamblin’ Polka Dot Blues) and similar fare, there’s a couple of unexpected versions of 1960s pop songs.  It would never have occurred to me that Winchester Cathedral might be done convincingly in the style of Singing Brakeman, but Thomas Fraser proves that it can; the Lovin’ Spoonful’s Daydream, on the other hand, probably had its origins in John Sebastian’s own country/folk roots, enabling Fraser to present it successfully as an old-timey number, and if, to be honest, he hadn’t quite worked out all the chords, he still delivered a performance of great charm.  Fraser’s rendition of Rattlesnakin’ Daddy is another highlight; his guitar-playing is delightful, as he intersperses his sung lines and yodels with bluesy runs - nothing too fancy, but just right.  There’s also more of those irresistible double-tracked harmonies on Silver-Haired Daddy, and the beautiful sacred track That Beautiful Land, from which this collection’s title is taken.  And there’s some more excellent solo fiddle playing.

Reading Karl Simpson’s notes in the booklet (again, beautifully presented with well-chosen photographs), and reflecting not only on Thomas Fraser’s extraordinary musical legacy, but also on the position he occupied within his own community, finds me once again ruminating on the ways traditions develop and adapt - as new technologies came along, a musician from a remote traditional community found a new way to bring his music to his neighbours.  Instead of singing ancient indigenous songs to them round the fireside or in a public house, this one made them lovingly put-together tape recordings of songs that originated thousands of miles away, that they could play in their own homes.  The extent to which those neighbours valued and cherished the recordings is apparent from the fact that so many of them requested him to make them, and also that such a large number have survived.  Knowing that Wullie Henderson, a fisherman from Burra, used to listen to his precious tape recording of Fraser’s haunting That Beautiful Land while at sea, lends yet another dimension to the story of this remarkable man.  This is not the tradition as we know it, but it is something that is very distinct from the way most people make and consume music nowadays.