Verena Commins and Julie Langan are two talented young musicians who have roots in county Mayo, but are now based in Galway city.  For their debut album, they have assembled an interesting collection of tunes, some traditional, others recently composed.  There is some information about the artists and the music on the accompanying leaflet, though I had difficulty reading it.  The compilers used a very small type-face in order to get as much information on as possible. 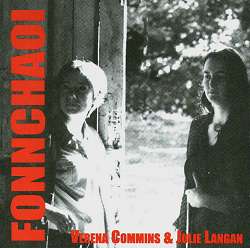 Having taken that decision, they might have selected a more helpful combination of colours than black-on-grey on one side, and pink-on-grey on the other.  On the CD itself, however, the sound quality is admirably clear, doing full justice to the music.  The tone-colours of the fiddle and the button-accordeon blend smoothly, and the arrangements are tasteful, if not particularly adventurous.  The delivery has a rhythmic assurance that's obviously grounded in regular session-playing, though occasionally, the beat becomes just a little too assertive.  The waltzes on track 14, for example, are delivered so briskly that the subtlety of the original melodies - and the decorations added by the players - do not come across as well as they might.  I suspect that if these performers played for dancers more often, they would give their tunes a little more lilt, with beneficial results.

Lament for Glencoe, the one slow air on the record, also suffers from a lack of rhythmic suppleness.  Admittedly, the tempo is varied - as it should be.  But often this variation consists merely of cutting short some phrases and drawing out others, in a way that seems to have little musical or emotional coherence.  Of course, a slow air is always the toughest test of a performer's interpretative skills, and I'm sure that with a little more experience, Julia Langan will respond to the challenge with better results.  Meanwhile, listening carefully to some experienced unaccompanied singers might give her useful ideas about phrasing.  But if this recording has one or two low points, it also has a fair number of high ones.  I particularly liked The Princess Royal, which Verena Commins plays in a minor key, and with a subtler (though no less toe-friendly) beat than the rumpty-tumpty version familiar to English Morris dancers.  Another outstanding set begins with Liz Carrol's jig Out on the Road, which has the sparkle that characterises every composition by the Chicago fiddle virtuoso.  Here it inspires the musicians to give the rest of the set a similar bounce.