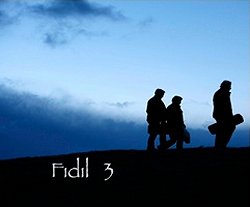 I enthusiastically reviewed Fidil, their first album, last year, and can find very little extra to add to the praise I proffered then!  This new CD, like the first, is just stunning!

Ciar·n ” Maonaigh and Aidan O'Donnell have been joined by Damien McGeehan on a third fiddle, yet remain as tight as ever.  To quote their publicity:

Their music making is marked by an intricate and intelligent approach that still manages to maintain the element of fiery exhuberance that is the hallmark of traditional fiddle music from Donegal.  This is traditional music for the 21st century - mindful of its origins but breathtakingly exciting in its ambition and delivery.

Every word is true, and the music fairly crackles with energy.  So much so that I'm loth to make my usual complaint about the tempi of the playing - and, to be fair, most of the slower tunes are taken at a very restrained pace.  Best of all, there's not a guitar or bodhr·n in sight - just three fiddles, very well played!  Indeed, at times you have to check, since one fiddle is sometimes strummed or plucked as a guitar might be.

And it's not just the playing which pleases this particular listener - there's a fine selection of lovely tunes to be heard here: jigs, barndances, a highland, a hornpipe, a set piece, a German, and only four of the tracks include reels!  It was also nice to find a crossover of tunes ... I don't play all that many Irish tunes, so I was surprised to find several titles here that I play myself.  Track 5 is three highlands - which are more or less the same as English schottisches - and the second one we know as The Kielder Schottische and the third Mrs Cuddledee.  Similarly we find that track 8, Martin Wilson's March, turns out to be Oh, Joe, the Boat is Going Over, and of course Napoleon Crossing the Rhine is well known here as Hot Asphalt.

Track 11, The Postman's Knock, is not the English morris tune, but its A music is very familiar from somewhere local, as is the whole of the CD's final tune, Francie Mooney's German. (Sound clip)

The booklet notes are brief but informative, telling not only from whom the tunes were learned but also where they originated ... and the tradition is still so alive in Donegal that these young musicians have actually played with some of their sources.  Not, as too often is the case these days "Children learning from children" - to quote a good friend of mine.