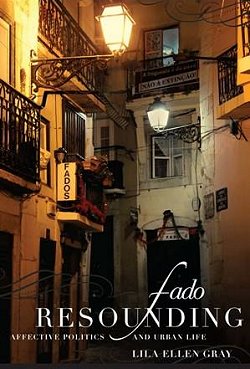 Fado - what's in a name - a postscript: after having read this book, of which I was first made aware having completed my article Fado - what's in a name for Musical Traditions.  Always curious when finding a book on fado in English, I managed to get hold of a copy through interlibrary loan, and spent the best part of a week battling through it, wondering countless times why I didn't give up but, still curious enough to see where it would take me, persisting to the bitter end.

The author is an American academic, an ethnomusicologist with a background in classical violin.  She tells that in her mid-30s she spent three years (2001-2003) living in Lisbon, where she attended hundreds of amateur fado sessions, spent some time learning to sing fado herself, and became personally acquainted with a number of participants in the Lisbon subculture of amateur fado.  She performed and recorded 20 interviews with 21 different interlocutors between January 2002 and May 2003 and recorded one further interview in January 2010.  The subjects interviewed were mostly amateur fadistas, with a handful of professional or semi-professional fadistas.  She also interviewed a renowned professional Portuguese guitarist, a renowned veteran recording engineer, and a recording company executive, and had conversations with many contacts and informants which she did not document formally.

The book oscillates between two distinct kinds of text - sentences and passages composed in an obsessively abstruse pseudo-academic meta-language which is very often difficult or impossible for this reader to make much real sense of, and passages written in a simple journalistic reporting style.  The numerous passages of the former kind contain certain far too often repeated words and phrases - e.g. 'foregrounding', 'writ large', 'writ small', which often add nothing whatsoever to the sense of the text.  This language, peppered with neologisms and obliquities, can rather be suspected of intending to signal to the reader that 'I'm now being intellectually sophisticated and academic, moving in the upper realms of the ethnographic stratosphere, and if you can't make sense of what I'm saying then you're not good enough - in fact you're rather silly and you shouldn't be trying to read this brilliant and very deeply thought book.'

The book is obviously intended to present, and to theorise about, the results of an ethnographic examination of a particular subculture in a single city in the present.  However, nowhere in the book is there a reflection on during how long a time this subculture has existed in a form or forms recognisably similar to its present form(s).  This lack of, or at least the diffuse character of, historical perspective is troubling, as there are good reasons to wonder whether the culture described in the book has existed in recognisable form for more than half a century.  Obviously, phenomena named fado have existed in Portugal for nearly two centuries, but that is no guarantee that the particularities of today's Lisbon fado subculture are 'old', considering the various social, economic, cultural and political processes of upheaval and change which have transpired in Portugal since 1830.  Admittedly the book doesn't make such claims, but neither does it devote significant space to reflections on the matter.

There are a number of signs of the author's lack of what I would consider a reasonably informed historical perspective, and of her somewhat perplexing ignorance of the materials of the music at hand.  Such lacunae hardly contribute to this reader's confidence in the author's seriousness of approach.

Here are a handful of concrete examples:

Whether or not one accepts the book's primary agenda, these facts, given as easily and briefly formulated additions, would in my opinion have offered the reader a more solid basis.

Although the words 'affect', 'soul' and 'feeling' recur on almost every page, there is a surprising lack of attempt to define them, not to speak of the lack of psychological reflection upon their meanings and implications.  Questions I ask myself: whether it is possible to estimate what proportion of the Lisbon population includes a significant relation to fado in their image of themselves, and whether there might be some kind of weighted selection of personality types among those who make up the amateur fado community?  What are the varieties of life stories included in the concept of the life of the fadista?  There is very little given in the book on the textures of actual lives.  Can one distinguish any significant currents of difference between believers and non-believers in the 'religion of fado'?

One point of genuine interest in the book, which I've not seen mentioned elsewhere, is the question of the implications of the religiously imposed silence in fado performance situations.  While this silence is today seen as an integral and exclusively positive component of the fado performance situation, indeed as one of its iconic characteristics, the author's hypothesis about its possible origin in the machinations of the authoritarian state as part of its strategy to include fado among its repressive tools of nation-building is of value.

The anecdotal recounting of the statements made by 'Amalianos' - self-confessed Amalia Rodrigues fanatics - is, perhaps unavoidably, but certainly frustratingly, lacking in reflections upon the particularities of personality among the three or four people so described.  Likewise, in the context of discussing Amalia Rodrigues' icon status and the celebrity adulation phenomenon in general, there is no real reflection upon the psychological aspects of those who adulate celebrities.

Much is made of singers' use of variations in dynamics, vocal timbre, and melismatic improvisation, and the characteristic melodramatic device of pausing and temporarily arresting the flow of the rhythm towards the end of a song.  While a comparison is made once or twice with older recordings which are noted as exhibiting these features to a far lesser degree or not at all, I once again come to think of the concept of mannerism in the art historian Wölfflin's arch model of the development of an art form.  The idea that this aspect of today's fado may in fact, to put it rather cruelly, be seen as a prime example of mannerism in a decadent phase of an art form, equivalent to musicians' exaggeration of speed and number of notes played in some kinds of music, is never discussed, for which the writer's lack of practised familiarity with earlier recordings is perhaps to blame.

There are extended references to the voice of Amalia Rodrigues, from various people and viewpoints.  Among aspects touched upon are how demanding her vocal style and voice were for a recording engineer, and how her voice changed with time.  Amalia is quoted as claiming that the engineer Hugo Ribeiro was the only one who could record her voice so that she felt it to be faithfully captured when she listened to the recordings.  Yet, close listening to his recordings of her reveals a liberal use of studio reverberation and/or echo which results, to my ears at least, in his having imparted an inescapably artificial melodramatic quality to her recordings.  This phenomenon, if noted, would have been of great interest for the author to have discussed with 'Amalianos'!  Not only how she is heard by others, but how she heard herself?

A piquant detail not mentioned in the book: there exists a photo of Amalia on her visit to Madrid in 1943, depicting her together with Armandinho and the Argentine, later naturalised Spanish singer, Imperio Argentina (1910-2003).  In 1938 Imperio Argentina had recorded two songs from the Spanish box office film hit Carmen, la de Triana, of which one was Los Piconeros - a song which Amalia then recorded during her first recording sessions in 1945, and which was her first recording in Spanish, in Spanish style.  The other song on the 1938 78 was Antonio Vargas Heredia.  The Carmen film was popular in late 1930s Greece, and the title of the latter song (actually the first words of the song) was amusingly 'Greek-ified' as 'O Andonis o Varkaris o Seretis', which translates roughly as 'Antonis the boatman and tough good guy', by none other than Markos Vamvakaris, with Spyros Peristeris performing the bouzouki lead, including a delicate flamenco pirouette!

Something to which the author refers tantalisingly briefly is the matter of the archival treatment of recordings of historical interest.  But although the book is sub-titled 'affective politics and urban life', she never actually delves into the substance of this theme, which I would have thought is of great relevance to her subject, so I wonder why she never mentions it.  Tradition (I see and hear the chorus in Fiddler on the Roof when I use the word here) is regarded so religiously in the amateur fado world, and yet in Portugal a large proportion of the historical aural documents of fado, which one would expect to be regarded as pillars of this tradition, have either been consigned to oblivion, or have been brutally maltreated, demonstrating exactly the opposite of what she implies - that there is an ongoing serious scientific program dedicated to the recovery of sound from archival material.

The year 2011 is mentioned, when fado was inducted into UNESCO's intangible heritage of humanity but, strangely, not the fact that a couple of years previously, in the midst of an ongoing economic melt-down, (a factor given certain space in the book), the Portuguese state spent approximately one million euros on a huge collection of archival discs, a collection which is now partly accessible on line in execrable, to a sensitive musical ear often basically unlistenable audio files.  Not a single one of those to which I have listened would pass muster for a serious commercial reissue of music from 78 rpm discs.  This is not because it would be impossible to extract acceptable sound from the discs at hand.  There are many examples of discs which are obviously in very good condition but which have quite unnecessarily been subjected to violent and destructive digital 'cleaning'.  In fact, virtually all the sound recovery in the only decent commercial reissues of pre-war fado has been done outside Portugal.  No 'affective political' analysis of this undeniably significant fact is attempted in the book.

I furthermore question the justification for publishing a book in the year 2013 about a kind of music in which fluency is for the most part acquired by ear, without offering the reader access to audio examples of what the author is talking about, and instead offering a handful of notated fragments, plus ten pages of elaborate written transcriptions of four performances, three of which are not available to be heard if the author doesn't choose to share her recordings.

So who is this book actually for?  I really don't know.  I can't imagine any non-English speaker managing to navigate such a jungle of labyrinthine abstraction, so it's presumably not intended for a Portuguese audience.  But is it even for native English speakers who are fond of, and/or interested in, fado?  I wonder, becase this reader - a multilingual English musician, practising psychiatrist and psychotherapist, with university degrees in medicine, psychotherapy, musicology, art history, English literature and social anthropology - found it almost impossible to read.  Neither the design of the front cover nor the blurb on the back cover imply that it is a doctoral thesis directed towards a coterie of initiated specialists who are inured, or immune, to its vagaries of verbose self-indulgent abstruseness and who are accustomed to patting each other on the back, pretending that there are actually Imperial fabrics between their hands and the author's skin.  Much like aspects of fado itself as described in the book, it has the character of a self-reflexive act, with the difference that there is a serious risk is that it is not really capable of delighting, or communicating with, anyone else but the author herself.  But of course it would be nasty to say that.