Tunes from the Flaggy Shore

No label or number 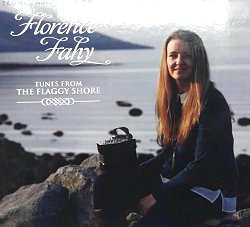 Florence Fahy is a concertina player from New Quay in North County Clare who has lived in the USA for the last 10 years or so.  She grew up in a musical home, took dancing classes and then picked up the concertina under the guidance of her dad Mairtin Fahy around the age of 10.  She took lessons from the late Dympna O'Sullivan and now teaches the concertina herself in Boston.  Her style is very much rooted in the North Clare tradition.  The pace of the music is steady but full of rhythm and drive, neatly ornamented with rolls, triplets and light chord work.  There's even the occasional bit of double octave playing and some sensitive and tasteful melodic variation.

The first couple of tracks give immediate confirmation that Florence is a very confident, yet tasteful player full of respect for the tradition.  On track 3 she's joined by her dad for the first of three unaccompanied duets.  These are the stand out pieces on the CD, not just for being unaccompanied; and the closeness and ease of playing and the amazing synergy you only get from close family members is something to savour.

Mairtin himself is well respected in the area both for his style and also his repertoire of old and local tunes and variants.  Florence plays many of the tunes she picked up from her dad and at the weekly Friday night session at Linnanes in New Quay with Charlie Piggott, Marion McCarthy and others back in the 1990s.  The tunes are often modal or minor which always sound best when played at a unhurried pace.  The CD also includes tunes taught to her by Dympna O'Sullivan and more recent compositions from published collections by Paddy O'Brien, Vincent Broderick and Sean Ryan among others.  While the tunes are mostly familiar to the Clare / Galway repertoire, it is a very pleasing selection of some forgotten favourites and more recent additions to the tradition.

In addition to the duets with her dad, Florence is also joined by Bebhinn Ni Bhriain on flute, an old sparring partner from her younger days around New Quay and Kinvara; and Cork fiddler Marien Collins who had shared tours with Florence in the late 90s.  The fiddle sits nicely with the concertina, the flute slightly less so.

The CD was recorded at Garry O'Briain's studio in New Quay and Garry is a well known and highly respected accompanist on bouzouki and piano and he provides accompaniment to almost all the tracks on either bouzouki or piano, and sometimes double tracked on both.

There are mixed views about accompaniment on CDs as audience expectation can vary so much from hard-core purists to casual listeners who may need more than the solo instrument to hold their attention.  In this recording, though, when Florence's rhythm is so strong and compelling, the accompaniment could have been more restrained or omitted altogether without losing any of the attraction of the playing.  Given there are 19 tracks spread over just under 70 minutes it's disappointing that there isn't more than a single unaccompanied track of Florence playing solo.  That said, the recording captures Florence's highly accomplished playing cleanly and clearly.

The CD package is lavishly illustrated with old family photos and new photos by locally based photographer Nutan.  There are extensive, if a little self indulgent and repetitive, sleeve notes penned by Florence herself.

There are a lot of concertina players in County Clare and beyond, many have released CDs over the last few years and it takes something special to stand out.  This is one that does, Florence Fahy has a style and repertoire to mark her out as player who remains true to her roots and has the technical and musical ability to keep the unique North Clare style fresh and vibrant.

Highly recommended, the CD is available from Custy's.