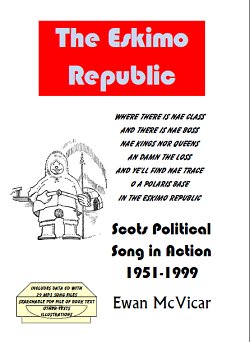 Ewan McVicar`s Gallus Publishing outfit is an example of the emergence over recent years of outfits producing so-called vanity publications.  The rise of computer-driven desktop production has been warmly welcomed in a broad range of cultural areas.  Arguably, it is a phenomenon which may be perceived as particularly compatible with the traditional arts, sharing, as it does, the spirit of independent expression that is of the essence of the post-war Folk Revival.  That said, however, no special pleadings should be entered on behalf of vanity publications: they must be subject to the same rigours of critical scrutiny as are applied to large-scale commercial publishing houses.

In these circumstances, it would be gratifying indeed to be able to report that The Eskimo Republic successfully measures up to the required standard.  Unfortunately, Ewan McVicar`s offering suffers from a number of grievous shortcomings, not the least of which concerns the rather misleading title of the book.  The Eskimo Republic can scarcely be said to address the wide scope of 'Scots Political Song'.  Perhaps a more appropriate description of the book's remit might be something along the lines of 'Scots Political Song of the Radical Left' or, more facetiously, 'Scots Political Song that the Author Sympathises With'.  Admittedly, McVicar does occasionally genuflect in the direction of songs from sources outwith the radical left.  He makes mention, for example, of a handful of the more jingoistic pro-royalist effusions of the 17th/18th century broadside press.  These excursions, however, are brief, oblique and not especially informative.

Lest it be thought that Scottish political song sources are the exclusive domain of the left, consider, for example, the vast reservoir of so-called sectarian songs that continue to disfigure modern Scottish society.  To be fair, the introductory chapter of The Eskimo Republic briefly mentions these, and other traditions of political song.  Tragically these materials continue to be widely circulated in CD and book form, and (perhaps more interestingly) remain in vigorous oral transmission.  A further example : the Young Conservatives' Monster Edition Songbook (published 1986) contains a number of crypto-fascist songs celebrating, for example, the lives of such as P W Botha ('die groot krokodil' of Apartheid notoriety) and mass murderer General Pinochet.  Nor should it be doubted that the BNP and the EDL possess their own political songs.

The ideological vulgarity of such materials hardly needs to be dwelt upon: but it should not be the business of folk scholarship to pretend that they do not exist.  Paraphrasing the late Bert Lloyd, we should not respect the zoologist who omits the aardvark from his field of study because he finds the animal unattractive.  There is no doubt, of course, that Ewan McVicar's involvement (like my own) has been confined to political song within the narrower framework of the radical left, and that he sets out to examine only those materials with which he is most familiar.  This is a perfectly respectable point of view.  Nor is it seriously suggested here that his book should offer gratuitous currency to the gothic horrors of such extremist right-wing materials.  The author has over many years played a prominent and productive role in the Scottish folk revival: all honour to him.  Unfortunately, there is little or no sense of awareness from The Eskimo Republic that its author is conscious that political songs of the radical left can only be properly understood when considered together with sibling traditions bubbling up from a common cultural broth.  The book's misleading title is symptomatic, perhaps, of a scholarly casualness and partiality that is one of its besetting weaknesses.

A second inaccuracy contained in the book's title is concerned with the supposed allotted timespan of 1951-1999.  In fact, The Eskimo Republic contains no fewer than four chapters discussing materials dating from (say) the 1707 Act of Union to the present day.  These chapters are spliced in between those that are actually concerned with the postwar years.  As a consequence, the narrative thread becomes fragmented; difficult to read; prey to an uneasy sense of discontinuity.  Doubtless, the intention of this structure is to sketch in some of the historical context of the contemporary songs.  It might, however, have been better to have provided this information in a sequential manner, inserted, where relevant, as the book progresses.  In any event, these historical materials are hardly exhaustive.  The links with contemporary political song are not always made plain and are confined, for the most part, to illustrating the wide use of parody and tune-recycling in contemporary political song.  The fragmentary nature of these researches leaves the impression that the author of The Eskimo Republic succumbs to the autodidact's occasional preoccupation with 'facts', as opposed to systematic analytical insights.

During the past two/three decades, the history of the Folk Revival in England has inspired the publication of a number of books, some of which examine the political origins and influences of the earlier formative years: Scotland has been much less well served in this regard.  The Eskimo Republic is, in some respects, a worthy attempt to make good this shortfall.  Ewan McVicar does manage intermittently to point up some of distinctive features of Scots political song, particularly its use of irreverent parody combined with the fierce demotic energy of the lyrics.  Yet the book communicates a feeling of parochialism (admittedly far preferable to provincialism!) combined with a kind of cosy chronyism.  A number of individuals referred to as 'key songmakers and activists' were, in fact, peripheral figures at best; only included, it would appear, because they are, or were, personal acquaintances or political fellow-travellers of the author.  This is, perhaps, particularly the case in his assessment of the crucial formative period of the early sixties when the author was not actually resident in Scotland: certainly, several of these 'key activists' were rarely, if ever, sighted at campaign demonstrations.

It has long been a favoured bromide of the left that all artistic expression is fundamentally political - the argument runs that songs were made by people: people make up society.  In recent years essentially Marxist-inspired genre studies have yielded some absorbing insights into certain aspects of the nature of popular art.  With this in mind, it is, perhaps arguable at this semiotic level to consider that traditional songs and ballads bear some tangential relationships with contemporary songs of protest.  At a more detailed level, however, it is hardly instructive to suggest, as Ewan McVicar seems to do, that Scottish bothy songs and ballads somehow form part of a historical continuum with contemporary 'political songs of action'.  Ballads such as The Laird of the Dainty Dounby, Sir Patrick Spens and The Gaberlunzie Man are concerned, we are told with 'class prejudice' and with 'sexual politics'.  The subject matter of Lord Thomas and Fair Eleanor is, we are invited to believe, about 'possible racial prejudice'.  Inconvenient as it may be, however, the real underlying concerns of traditional folksong lie with the much broader sweep of human experience, rather than the narrower, ultimately confining, categories of present-day politics: they are in fact concerned with nothing less than 'older waves that beat on vaster shores'.

Discussing the extensive range of issues addressed by Scots political songs, The Eskimo Republic states that 'when a political issue catches fire … Scottish songmakers are usually to the fore'.  And the book goes on to list some such issues … 'Women's Rights, the Poll Tax, The Gulf War, the closure of the Govanhill Swimming Pool and the struggle for equality in South Africa'.  The Govanhill Swimming Pool issue referred to was a splendidly triumphant campaign (led by the late Alistair Hulett and others) to preserve the facility in Glasgow's south side from closure by the local council.  There is nonetheless a delicious parochialism that contrives to book-end such a campaign with global-scale struggles for international peace and racial equality.

There is, without doubt, a requirement for an all-inclusive folkloristic study of the wide scope of Scots political songs.  Such an ambitious project would require, however, to be comprehensive, analytical, scholarly, methodical: The Eskimo Republic is not such a book.  Instead Ewan McVicar's style is rambling, allusive, anecdotal, discursive, occasionally hard to read because of its insecure grasp of chronology.  On the positive side, it should be stated that The Eskimo Republic does capture some of the exhilarating intellectual chaos of the earlier years of the folksong revival.  In addition the book is accompanied by a CD offering a number of recordings that effectively capture the raw 'jaggy bonnet', in-your-face character of many of the best of the Scots political songs of action.  Maybe this first attempt will encourage others to make good the gaps.