The Elliotts of Birtley 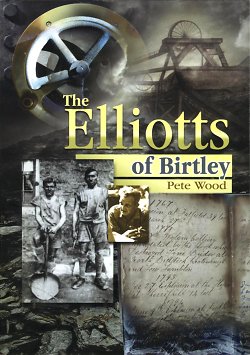 Pete Wood, a scion of the north west of England spent much of his youth from 1962 absorbing and participating in the second Folk Revival in various parts of the country, including some years in London when he was a regular at your editor's folk club in Kingston.  In 1974 he moved to the north east for work and it was there he met the 'Elliotts of Birtley' who, rather like the Stewarts of Blair, are always given this extension to their family name - in case you don't know who they are, perhaps.  Pete fell in love with the Elliott family, their club which he describes as having 'gritty realism and an authenticity', and 'Chairman Pete ...  with his political attitudes oozing from every pore'.

Pete Wood determined to write a book about the Elliotts as no-one else had done it, and he felt it needed doing.  Unfortunately, by the time the idea had settled firmly in his mind Pete Elliott and his wife Pat, likely to be his most useful informants, had died.  However, Doreen Elliott and her husband Bryan Henderson were keen to help with the research, and this book is the culmination of that joint effort.  Pete Elliott's children, Laura and young Pete, and many other Elliott family members have been the greatest help.

The story of the Elliotts of Birtley is not the story of an ordinary working class family.  The Elliotts are anything but ordinary, as the author points out many times in the book.  The true family founder was Frank Taylor (1832-1903) who was indeed a foundling who 'made' himself a family name, Elliott, and a family to go with it.  Of his nine living children the youngest was Lance, whose 11 children included probably the most famous, Jack.  In 1872 Frank moved to 7 Brown's Buildings (a district, not a tenement), Barley Mow, Co Durham where his descendants continued to live.  Brown's Buildings were pit cottages and the sons of the tenants were expected to follow their fathers into the mine, which is precisely what the Elliotts did through the generations.  Jack (1907-1966) and his brother Reece (1894-1980) worked as 'marras' for most of their working lives, and two of Jack's three sons were also miners.

There was music in the family, as Jack's father Lance played portable organ, mouth organ, and 'home melodeon' (which turns out to be - a melodeon), and Jack played mouth organ and assorted stringed instruments from a young age.  Jack's mother Jessie was of Gypsy stock, and her brothers had a string trio.  There is not much evidence of the women's musical participation, of which Pete Wood is very aware, 'both women (Jack's wife Em and her daughter Doreen) were a product of their times and in a tough man's business like mining, they knew when to bide their tongue and take a back seat.  So when it came to folk clubs, it was Jack and Pete (his eldest son) who went to The Bridge in Newcastle, while Em and Dot stayed at home ...  there are fewer stories about the women, mainly because they got out less'.  Peggy Seeger found this when she and MacColl got to know the family during the making of the radio ballad 'The Big Hewer' ...  'she observed that the the men were "more equal" in that whilst Ewan was talking, she'd keep quiet, and when Jack was talking, the Elliott women would keep quiet.' Ray Fisher remembers what a male bastion the Elliotts' Birtley folk club was, where there were few women singers, and Em and Dot rarely attended.

The Birtley Club started in 1962, and like most others, has found its home in many venues.  It seems to have been started as a counter to The Bridge which was seen as elitist and intimidating, where floor singers were not necessarily welcome.  The rule at the Birtley Club was always 'singaround' and all the biggest names from the Bridge, including the organisers, Johnny Handle and Louis Killen, came regularly and sang alongside the Elliotts and every other singer in the room.  The author acknowledges the irony of MacColl suggesting the Elliotts run their club in this way 'like you sing around the kitchen', since it was the absolute antithesis of the way his own Singers' Club in London was ordered.  MacColl's suggestion of format rings particularly hollow when the Birtley Club's first visit to the Singers' Club was such a fiasco; only the family were allowed to sing, and the great Jack Elliott was told what to sing!  Apparently, he was also chastised when he returned to the Singers' Club because he 'hadn't moved on'.  I was privileged to see Jack Elliott at my regular club, the Fox in Islington, where he could sing whatever he liked.  And what an evening that was.

In my own experience, the most pleasurable way of running an evening of singing is still as a singaround, with further drink and argument at somebody's house afterwards, exactly as the Elliotts did it in the early sixties.  The singaround format has obviously been successful and the club is still running with Jack's daughter Doreen and her husband Bryan Henderson at the helm, though its latest home is in the Catholic Club, 'an interesting manifestation ... (for) the most famous atheists in folk music'.

There is plenty in this book about the work and the politics of the Elliott family, with reminiscences from all members.  Many of these were utilised in Charles Parker's recording of the radio ballad The Big Hewer in 1961.  Reece, Jack's older brother, says of the dust that caused fatal sickness to so many miners, "Can you imagine, you get on to a face, 16 inches, and you see ...  40 yards away up these 16 inches, and you wanting a drink?  Can you imagine yourself crawling all the way down to where your jacket was to get a drink then come crawling all the way back? ... I've seen me, and he's seen me, retching with the dust at the back of your throat."  The Big Hewer, MacColl's radio ballad on mining was a breakthrough for both him and the Elliott family.  MacColl's had been looking for pitmen to sing him pit songs, but they always dressed up and sang hits from the shows.  Fortuitously, Johnny Handle knew what MacColl wanted, and where he could find it.  He pointed MacColl in Jack Elliott's direction.  'When MacColl met the Elliotts, it must have been like all his birthdays coming at once.'  Of course it must, here was a family who fitted in with all his preconceptions - they were dignified, proud, had songs, and above all they were COMMUNIST!  He certainly couldn't do better than that.  The programme was a great success with the public, but above all with the family, including the pitmen 'a bloody good programme,' ... 'the best programme yet.'  The programme led on to the Folkways LP The Elliotts of Birtley: A Portrait of a Mining Family in 1962, the same record that was eventually issued on a British label, Xtra, in 1967.  Following the radio ballads, the BBC was interested in 'politically slanted films of ordinary working people' and Charles Parker recommended the Elliotts to Philip Donnellan, who produced Private Faces and later The Death of a Miner.  The BBC decided that Private Faces was not really what they were after, but Philip Donnellan became a lifelong friend of the family; despite being 'posh' he understood the class implications that arose from the film.  'The sons are happy to be working-class, whereas Jack hates the word, thinking himself a working man, and Pete typically takes things further.  "What people mean by working-class is lower class, but I consider myself to be working-class, which is top class!" '.

There is much in this book about class, however 'It seems that young Pete(*) was ambivalent about the Folk Revival, reluctantly admitting that the working class didn't want it, and that it wouldn't have happened but for the middle classes.  Although the family were famous in folk circles these did not permeate working-class Tyneside.'  The Elliotts were not necessarily singing for their peers, and when they were taken up by the Revival they had to learn many more songs, making them effectively collectors.  This is also true of many 'traditional' performers.  Fred Jordan was always coming up with new songs he'd learned in the Revival; in fact there is probably not a traditional singer or musician worth their salt who isn't constantly learning new music once they are exposed to it.  It is also true that the family were probably not representatives of their community, as the author points out in his conclusion 'their fellow pitmen and their families have seen the Elliotts as something very unusual, and their singing as "not for them" '.

It is noted, not for the first time, that there are almost no northern English singers on the Voice of the People series, but this is partly because Reg Hall was working mainly from the Topic archives, hence the predominance of Paddy Tunney, and concomitantly because the recordings were just not there.  Although Johnny Handle and Pete Elliott, amongst others, were given a tape recorder by the N E Federaton of Folk Clubs and 'sent off to find songs amongst ordinary people', most of those recorded are by the Elliott family.  There are pit songs, but none of the ballads, romantic songs, and others so popular with the people of the North East were recorded; "they just didn't get round to it", says Johnny Handle.

There are some problems with this book.  It is not always clear, as in mentions of young Pete(*) who can be either Jack's son or Pete's son, it is quite clumsily written in places, and there is a hideous predominance of exclamation marks - OK that's the English teacher bit out of the way!  There are lots of references to Jim Irving and one to Jimmy Irvine - are these the Jim Irvine who played bones and sang with the Marsden Rattlers?  More seriously, he refers to Keith Summers having recorded at Blaxhall Ship in 1953.  I don't think so, he'd hardly been out of nappies at that time.  Either Pete means 1973, when Keith was recording in Suffolk, or he is referring to The Barley Mow, Peter Kennedy's film of Blaxhall Ship made in 1953.  They are not the same thing.

These small caveats aside, this is a well organised book, which covers all aspects of the life and times of the family, and of the folk scene.  It is a very thorough labour of love which will be of interest to all who knew and admired the Elliotts of Birtley.