English and Border music for Pipes

Track list:
Mitford Galloway, Lasses Make Your Tails Toddle, The Bonny Miller/ Rusty Gully, When I was a Lady/ The Lilly, Jack Warrell's Hornpipe, Boxing Hares/ A Hornpipe, Cuddy Claw'd Her, The Silver Pin/ An Ye Had Been Where I Had Been You Would Have Not Been So Canty, Hey My Nanny/ Hit Her Between The Legs, Alloa House, Welch Hornpipe.
All tunes Trad. Except Boxing Hares (David Faulkner). Total Running time: 58.45

I enjoyed this CD very much.  I listened to it several times before some unknown person of taste nabbed-off with it, so I am unfortunately writing this review from memory and an empty CD case. 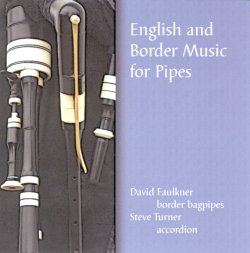 For those of you who dislike albums this specific, you could look away now, but you'd be doing yourselves a disservice as the playing is lovely and the two musicians imaginative and sympathetic to the music and each other.

The material as the title suggests is English and Borders (Scottish Borders) in origin and Faulkner and Turner have purposefully gone for a great selection of older, lesser-known tunes.  Sometimes with the help of the legendary Matt Seattle they take from John Offord's John of the Greeney Cheshire Way and William Vickers' manuscripts, as well as performing an excellent tune of Faulkner's (Boxing Hares) and playing selections from Borders music collections Bewick's Pipe Tunes (Mitford Galloway) and the revelatory William Dixon manuscripts (Lasses Make Your Tails Toddle).  The bibliography on the sleeve was handy as there were a couple of collections in there I hadn't seen before and will be making an attempt to get soon; I love musicians who pass their sources around as it widens the tune pool for everyone.  Thanks fellas.

The style seems to me to be the prevailing modern way of playing these kinds of tunes on these instruments; that is to say, pipes and accordion together sound quite European, and they do play to this, sounding French sometimes, using syncopation in accompaniment and invention in chording.  I like it because it joins us in musical origin with the continent; restores to us the complicated time signatures and dark moods of the music we played before the 19th Century made everything jolly and in 4/4!  This is music with an old, inclusive soul.

Steve Turner's accompaniments reminded me of Andy Cutting in places; it is a comparison difficult to escape as Mr Cutting's influence is pretty much universal among British accordion players, especially when playing in this style, but that's certainly no bad thing.  Turner has a lovely touch and great instincts, it's a joy to hear this style done so well.

David Faulkner is also an expert musician with fantastic tone and although he mostly sticks to expressing the tune, he does break out and improvise every now and then, which adds to rather than detracts from the experience.  The two together express a wish to make this music known and played again and I hope they succeed; I don't think it will be difficult if this CD gets enough attention, it is totally engrossing and certainly made me want to play along.

Favourites and gripes?  I love Jack Warrel's Hornpipe, it's one of my favourite tunes anyway, and they play it to bits.  I wasn't that taken with The Bonny Miller/Rusty Gully set, it's over-long and didn't sustain my interest.  That's it though, I loved the rest of it and hope to get my copy of the CD back soon so I can play it again.