The Music of Ed Reavy 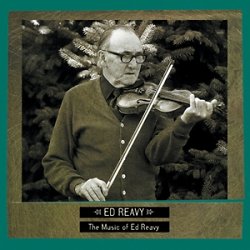 Born in County Cavan in 1898 into a rich musical environment, Ed Reavy began to learn the flute when he was seven, followed by lessons on the fiddle, When he was ten years old, he emigrated to Philadelphia with his parents, to join his elder siblings.  Settled into an Irish community there, his fiddle playing continued to improve, and he was in more and more demand for dances and house parties.  After serving apprenticeships in mechanics and in plumbing, he was a plumber for the rest of his working life, building up his own successful business.  He died in 1988.

He was active as a composer of traditional dance tunes from the 1930s up until the 1960s, writing hundreds of tunes, many of which are now sadly lost.  As an active player, he met and was known to many other east-coast players, who liked and learned his tunes.  As travel and communication became easier, many of his tunes were taken back to Ireland, where they rapidly gained currency.  Ed Reavy was a very accomplished fiddler himself, which is reflected in the fact that many of his tunes are far from easy to play.  This album includes five tracks of him playing his own compositions, duetting with his son Joe.  Like all the other tracks, these were recorded in the late 1970s, when he was approaching his 80th year and no longer playing regularly, but still no mean fiddler.  There is, however, another track included which he recorded on a 78 rpm disc in 1927.  It is fascinating to hear him in his late 20s playing two traditional reels, playing cleanly and on top of his game.

This CD is essentially a celebration of Ed Reavy's compositions, nearly all those chosen being jigs and reels, with a couple of hornpipes and a fling.  They are played by a pantheon of Irish-American instrumentalists, includes many well-known names such as Paddy Cronin, both the Mulvihills and Billy McComisky, plus Louis Quinn, long time friend and disseminator of Reavy's tunes.  Also included are some of the then up-and-coming generation of players, notably Liz Carroll then in in her late 20s.  Maeve Donnelly, now of the wonderful 'Moving Clouds', who was on tour from Ireland, contributes two splendid tracks.  All the players do full justice to the tunes; many of his most frequently played tunes are included, such as Love at the Endings, Hunter's House, The Shoemaker's Daughter, Maudabawn Chapel and the wonderful Lad O'Bierne's hornpipe.

Some of the players are discreetly accompanied on guitar by Mick Moloney, who produced the CD and is responsible for the exhaustive 38 page insert booklet.  This includes extensive background notes on Reavy himself, including his own comments about the tune titles.  Brief information is given on each of the players and finally, an analysis of Reavy's compositional style.

Although inventive and often ambitious, Ed Reavy's tunes seem to fit seemlessly into the Irish traditon, which may help to explain why many have become firmly embedded in the modern Irish traditional repertoire; they have frequently been paid the ultimate compliment of being credited as 'trad'.  It is probably true to say that there can be few Irish sessions anywhere in the world where Hunter's House is not played at some stage.

In spite of being all instrumental, and almost all fiddle, there is enough variety of tunes and instruments to make an enjoyable listen.  If I have a criticism, it would have been nice to have a few barndances and slip-jigs - he wrote some good ones.