Last weekend (24-26 September, 1999) saw the concurrent presentation of four unusual events to the British - or perhaps one should say the English - public.  The first was the 'English Originals' series of concerts and lectures at London's Barbican Centre.  This was unusual in that it presented mainly (though not exclusively) English 'folk' music at a major venue for the first time in ages - and in that the Friday concert, at least, was completely sold out!  Rather late in the day from an organisational point of view, it was decided to make this concert also a celebration of Topic Records' 60th anniversary (the oldest independent record company in the world).

Possibly, this prompted Topic to hustle the production of the three other unusual events mentioned above: the publication of a complete catalogue for the first time in three or four years; and two additions to their '700 series' of mid-price 'Voices' releases - 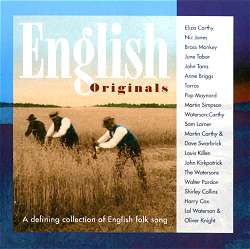 Presumably a combination of the establishment of the Scottish, Welsh and Northern Ireland Parliament and Assemblies and millennial angst has promoted a recent flush of usually misguided considerations and discussions on the nature, place and culture of the forgotten people of the British Isles - the English.  The events mentioned above must be seen as part of this process, and as such, a record which might not have been seen as appropriate for review in these pages a few years ago now finds a place here.  Given the presence of Pop Maynard, Sam Larner, Walter Pardon and Harry Cox on the CD, together with the subtitle 'A defining collection of English folk song', a close look at what's on offer seems called for.

Broadly, the content falls into three sections: the traditional performers mentioned above; revivalists performing traditional material in a 'traditional' style; and revivalists performing either modern or traditional material in a modern style.  The first group comprises four songs, the second: ten songs and four tunes, the third: three songs and two tunes.  The inclusion of the six tunes does rather call the CD's subtitle into question, but perhaps one shouldn't be too picky at this stage.

The first two groups are fairly uncontentious in terms of content - though one might ask why, when the second is almost equally shared between the sexes, the first should contain only male singers?  But the third group, revivalists performing in a modern style, is a very mixed bag indeed.  At one extreme, Martin Simpson uses The Keel Row as a vehicle for what, in 1987, may have been seen as a display of guitar fireworks - someone intelligent once said "I'd like to be able to do that ... and then not!"  At the other extreme, Lal Waterson and Oliver Knight join an enthusiastic chorus in the gorgeous Some Old Salty - a song which, while obviously modern, sounds and more importantly feels exactly 'right', and could have fitted into the repertoire of many a traditional singer from the North East, had there been any left alive to gleefully snatch it.  Between these sit Tarras with the instrumental Parsons Green and John Tams with his own compositions From Where I Lie / Sheep Counting.  Neither seem, to me, to have much of a meaningful connection with 'English folk song'.

Only three are unaccompanied - as they all ought to be in my opinion - the Briggs, Killen and Watersons tracks.  The Watersons are as inventive as one could wish on Sheepshearing - putting together two separate short songs and adding the delightful 'part-round' into the chorus of the second one.  Louis Killen's Young Edwin, which I'd not listened to for many years, stands up very well and it's only the odd 'folking' of the word 'parents' into 'par-i-ents' in the last verse which so clearly dates the performance.  His declamatory style serves the song well - and I don't suppose we'll ever know how Mrs Hopkins of Axford, Hants, actually sang it.  Was this one which Vaughan Williams caught on cylinder, I wonder?  Anne Briggs' Reynardine sounds even better than ever with modern technology to clean up the original recording.  This song, perhaps above all others, perfectly suited her style and unusual personality, and she sings it beautifully, with less heavy ornamentation than she was sometimes wont to employ, quite subtle melodic variations and with a delightful freedom of rhythm - allowing the song to breathe.  I think this vies for top place as my favourite revival performance on the CD.

The accompanied tracks all suffer from being forced into a rhythmical strait-jacket ... and some survive the experience better than others.  Shirley Collins plays simple banjo along with A Blacksmith, adding nothing to a wonderful song while subtracting a great deal - for this listener, at least.  June Tabor's April Morning has accordion and fiddle back-up adding even more atmosphere to an already overly atmospheric rendering.  The text of Waterson:Carthy's Rambleaway has been put to the jaunty waltz tune Old Mother Crawley and so carries off the fiddle/guitar/melodeon backing without much problem - and the same might have been said of Eliza Carthy's Whirly Worl, were it not for the heavy, modern, syncopated band back-up remaining identical for every verse of the song, the intro, the two instrumental breaks and the coda.  Some light and shade needed here, and no mistake!  Brass Monkey's The Flash Lad survives its heavy backing far better, due perhaps to being far more complex rhythmically and melodically - and coupled to a much more thoughtful brass arrangement.  Byker Hill as a then almost unheard-of 3/2 hornpipe works for Carthy & Swarbrick as sung dance music - rather in the way the Bretons do it.  The long guitar introduction shows off Martin's subtle and melodic playing to great advantage, but seems superfluous to the rest of the track ... a concert feature which doesn't transfer well to record and repeated listening.

To take a slow traditional song and add a rhythmic accompaniment almost always diminishes it.  If the song is also dramatic and passionate, the text interesting and the accompaniment melodic, it's a sure recipe for disaster - and yet Nic Jones and Tony Hall somehow pull it off with The Flandyke Shore.  I don't know quite how they manage it - unless it's simply by being exceptionally brilliant at what they do.  This strange and beautiful song seems almost perfect in this performance - only to be improved upon, perhaps, by a little more rhythmic flexibility.  Together with Reynardine, it stands head and shoulders above the rest of the revival performances here.

The traditional singers have all been featured in Topic's superb Voice of the People 20-CD series (all reviewed in these pages), from whence their four songs here have been drawn: Maynard - Polly on the Shore; Larner - The Lofty Tall Ship; Pardon - Van Diemen's Land; Cox - The Bold Princess Royal.  Regular readers will require no comment from me on the quality of these singers or these songs, but newcomers to traditional music might be interested in having a look at just what is so wonderful about the way these old men sing.

Comparison is made a good deal easier in this instance because all four songs are ballads and all follow roughly the same format: situation; encounter; struggle; resolution.  Minor variations on the theme occur: In LoftyTall Ship and Bold Princess Royal there's an exchange between the protagonists before the battle, and in the latter there's even the brief sub-plot of the Captain's initial distress until reprimanded by the First Mate.  Van Diemen's Land has a much fuller description of the situation than the others (though LoftyTall Ship would have done, too, had not the first few verses of the original ballad, Henry Martin, been omitted), while Polly on the Shore includes a love story as a sub-plot.

But in every case it's the story which is the important thing, and while all four singers employ different styles (Larner is the most declamatory, Pardon the most reflective) they all share the story with you in a way which prevents the melody or their artistry getting in the way of it.  This approach is perhaps the natural consequence of the traditional performance situation, where the audience is as familiar with the story as the singer - rather like the parent telling his/her child a well known and loved bedtime story ... the actual words used can differ, but the tale must be correct in every detail.  Here, the melody can be subject to variation and decoration, the words can have additions and subtractions, but the dramatic and emotional content must remain constant and accessible.

A revivalist singer tends to work on the surface of things - s/he may concentrate on a beautiful melody (particularly if blessed with a good voice) and let the words just fall as they will, or dramatise the text - almost 'acting' the story-line - as so many modern storytellers do.  Neither technique, despite a superficial appeal, results in a truly satisfying performance - that wonderful feeling you sometimes get at the end of a song of knowing with absolute certainty that nothing more needs to be said on the subject.

The techniques these traditional singers use to present their songs in a fresh light each performance are subtle and self-effacing.  The first, and most important (to my mind), is the use of free rhythm.  This is not the obvious slowing-down or speeding-up employed by some revivalists to make dramatic points, but the natural pulse imposed by the body's response to the content of the song.  If you listen carefully to any of these singers, engage emotionally with the story as it unfolds and sing the words under your breath along with the singer, you will probably think he's singing in strict-tempo ... a metronome would tell a very different story.  Walter Pardon uses this ploy most obviously - like listening carefully to an Irish slow air, it's almost impossible to predict precisely when the next note will occur or how long it will last.  This is why you can only really listen to this music with your full attention - and why it often demands your full attention.  This stuff just does not work as background listening.

The second most widely-used technique is melodic variation and decoration.  This can range from pure improvisation where in extreme cases even the underlying chordal structure of the tune is sacrificed for the sake of a flight of fancy, to the most subtle of variations involving perhaps only the reversal of a pair of melodically insignificant notes.  All four of these singers employ the technique in a fairly subtle way which may be initially indiscernible to an inexperienced listener, but I would guarantee that careful attention to detail would reveal that not one of them uses an identical melody for any two verses of their songs.  Harry Cox's use of the doubled or tripled note where the 'standard' melody only requires one is another common decorative device - brought to a high state of development in the sean nós singing of the west of Ireland, most notably in Connemara.

Perhaps the most obvious variation technique is the modification of the tune to fit irregular textual metre.  There are many examples in these four songs of additional syllables in the text being effortlessly incorporated into the tune, and at least one of a complete beat being removed to suit the words.  The most obvious of all is Harry Cox's combining one and a half verses into one complete melodic structure, towards the end of Princess Royal.

The booklet is, of necessity for this sort of populist release, pretty brief - but does manage to say something germane about everybody concerned, and starts with a sensible discussion of the idea of national culture in the widest sense and moves on to the elusiveness of whatever it is that constitutes 'Englishness'.  Given the inevitable constraints, compiler Laurence Aston has done a good job here.

Despite its modest pretensions as a mid price, mass-market 'product', this is a very good compilation and among the best of the '700' series.  Well over half of the tracks should be of interest to most MT readers.