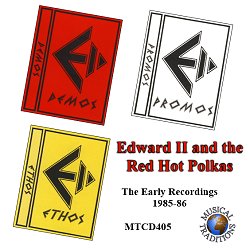 Ah, the heady daze of 1980s' English dance music, when you could nail a few bottle tops to a stick and call yourself a musician, and when putting a reggae bass line behind a Sussex polka was the height of innovation.  In the words of Ford Prefect, don't knock it - it worked!  Edward II and the Red Hot Polkas - E II as they were known - moved this music on from the gentle but pleasing pastoral sound of Umps & Dumps or Flowers & Frolics to the more strident noise of the Stradlings and Kirkpatrick's folk rock.  Of course, E II eventually lost their way, like The Clash and The Albion Band, pushing the blend of folk and pop too far with - in their case - a smoothing iron.  But this is where it all started, and as a historical document it's quite fascinating.

Musically this is a mixed bag - but it's a big bag at almost an hour and a half, so there's plenty to explore.  100% instrumental, at times the 'instru' is optional as the band bring blues, reggae, rock and creole elements into what is basically English and French rural music.  There are touches of Scottish and Irish traditions in the hornpipe, Little Stack of Wheat, plus a pair of Irish polkas, and a version of The 79th's Farewell which Swarbrick had mastered 10 years earlier is busily deconstructed here.  That seems to be the pattern on most tracks - a simple melody is established, usually on melodeon, and then percussion gradually overwhelms the melody, stripping it back to occasional notes, with perhaps the addition of Hawaiian electric guitar, or Reggae bass, or both.

There are some exceptions where the tune holds its own - The Gloucestershire Hornpipe, Art Wooton's Quadrille and a couple of fine French tunes.  The order of tracks is roughly chronological, reflecting four separate sets of recordings, so some later tracks add dubious brass and more guitar.  The intriguingly titled Stradling composition, Walls of Butlin's, seems to feature someone scrubbing out a saxophone, mostly in time with the music.  There's a nice evolutionary twist as the final two tracks reprise pieces from earlier recording sessions.  Swiss Boy is now much more of a punchy dance tune, and the final bourrée gets an authentic French name, although it is known by several different ones throughout central France.  The sound quality is better too - less muddied than the opening Another Fine Mess - although there are one or two murky tracks in the middle of this collection.  Something for everyone, then, but I expect only a few will appreciate the whole collection.

The 'saxophone' on The Walls of Butlin's is actually Jon Moore's electric guitar as, I suspect, is the 'dubious brass' mentioned on 'some later tracks'.  EII never employed brass in this period - Ed.
Site designed and maintained by Musical Traditions Web Services   Updated: 13.2.16