The Enniskilling Dragoon, I Long for to Get Married, Adam in Paradise, The Cocks are Crowing. 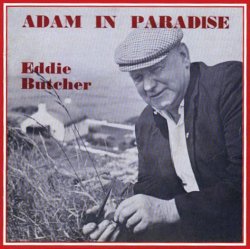 You may imagine just how wide a grin came to my face when I pulled this one out of its Jiffy bag!  Sadly, the grin didn't last very long when, on reading the booklet notes, I realised that this really is the CD version of the EP.  Yes, just four songs, and a running time of only 13 minutes and 45 seconds!

I have had cause to harangue Rounder Records in the past about their reissues of some Library of Congress LPs on CD with running times of only 28 minutes - yet that's twice what we get here.  And then - as if to rub your nose in it - the booklet notes tell us of the four LPs which Eddie Butcher made, and the fact that all Hugh Shields' recordings have been 'generously donated by him to the Irish Traditional Music Archive and the Ulster Folk and Transport Museum' ... the two organisations who have published this present CD.  From the accompanying Press Release we find that buying this record from the UFTM will cost you Ł12 inc p&p - which works out at 87p per minute (by way of contrast, an MT Records double CD will cost you less than 10p per minute!).

Now I am aware that Government funded organisations are required to generate their own income from publications, exhibitions and so on, and that the Hugh Shields donation must be seen as a valuable asset which should be exploited - but isn't this going a bit far?

All of which doesn't diminish the quality of Eddie Butcher's singing, or of the four songs he sings here.  Nor, for that matter, of the exemplary Notes Dr Sheilds contributed to the original EP release.  But, by 21st Century standards, it is an exorbitantly high price to have to pay for them.