This latest Musical Traditions project at last gives easy access to the singing, songs, stories & reminiscences of one of England's finest performers. 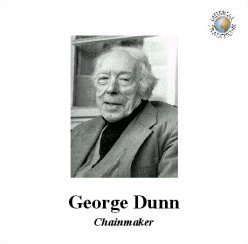 (I admit partiality here as George lived just a few miles from my own family stamping ground, and the dialect alone has my mother and I wandering off into stories of the past.)

Born in 1887 in the ironworking community of Quarry Bank near Dudley in the Black Country, George was a chainmaker and well-known singer at pubs & parties.  His songs, stories and reminiscences, presented here on 2 CDs (51 tracks) and transcripts in the splendid booklet produced by Roy Palmer (with his usual thorough, magic touch), paint a detailed, vivid picture of life in his community.  (Roy has written the transcriptions using a 'creative spelling' style which really does give a flavour of that very specific dialect).  The chain and nailmaking in particular are poorly documented, and George adds a lot to our knowledge of that time of extremely hard working conditions and poverty.  In contrast, his storiesof poaching, pigeon-flying, dog racing (and fighting!) and singing at all possible opportunities describe a close community well able to enjoy itself.  "It was a mean street (Sheffield street) but there was a lot o' love in it and a lot o' camaraderie ... lots of kindness.  And there was lots of poverty - plenty of poverty"

But this project is more than a document.  Roy Palmer, a friend of George's until his death in 1975, has put together a warm, affectionate tribute that reflects the singing skill, the humour of the man, his commitment to his songs and his obvious love of performing.  He was in his 80s when these recordings were made, and his public singing days were 40 years past, but the voice has amazing qualities.  Roy describes him at the time of recording (1971-75): "He was a skilled and precise singer, with an acute sense of pitch and timing, and a feeling for subtle variation and decoration.  The sheer quality of his singing is astonishing, particularly for an octogenarian.  The strength of his songs and the skill of his singing

command immediate respect and humility in the listener.  They are a living manifestation of the high art and long tradition of English folk music."  His strong, resonant voice always has control of the storytelling, and he has breath control and vocal range that most of us just dream of! (sound clip - Gallant Poachers)

His voice laughs a lot, delighting in the story and the act of telling it.  George's repertory is surprisingly rural - traditional ballads and songs, music hall and popular songs of the day, and hymns.  The Black Country tradition of excursions to Herefordshire for the hop-picking accounts partly for this.  Traditional songs were learned mainly orally from his father who sang to the family after tea, by lamplight.  "Father, sing we a song.  Sing we a song."  George himself was a dedicated reader, and popular songs were learned from newspapers, broadsheets and 'lucky bags'

(bags of cheap sweets that I remember buying as a child, although the songs printed on the bag were missing by then.)  Many of the songs in these recordings are rare.  (The ballad Edward has been found in England on few occasions, and George's While Shepherds Were Watching (sound clip) would seem to be unique to him, not a version of the common carol, but very 'Sheffield Carols' in feel.)

There are strong versions, beautifully sung of Cold Blows the Wind, The Broomfield Wager, All Fours, The Seven Joys of Mary, Nelson's Death, The Nottingham Poacher - just to give an idea of the range and importance of his repertory.  There are light-hearted songs such as

My Fathers a Farmer and The Basket of Eggs.  This last one is fascinating as George could only remember odd verses and so speaks the story in between (sound clip).  The track becomes a cantefable! )  The spoken parts of these recordings are a wonderful record of a dialect still used, but watering down a bit these days, maybe).

The later, popular songs such as Father Come Home Do are sung with equal conviction and all 'have something to say'.  However, I seem to remember at George's record launch party (for the LP produced in 1975 by Bill Leader - LEE4042, long deleted) he was asked to sing The Volunteer Organist and stopped after a couple of verses with "That's enough of that one!"

Several of the tracks are fragments of songs, and in the booklet Roy has supplied fuller texts from similar versions whenever possible.

On occasion he notes giving George supplementary texts which were then learned, changed (of course!) and added to his repertory.  At 80+ his delight in a new song was undiminished.  The fragments invariably have good, unusual, tunes. (sound clip - Broomfield Hill)

Full texts of all songs are given, and information is fully referenced; Roud, Child, Wehse numbers etc; other recorded and printed sources of the songs; tracks credited to the collection of Roy, Ewan McColl and Peggy Seeger or Charles Parker.  The information is easily accessible, and the songs are wonderfully learnable!  I sing some, and intend to learn a lot more!

The recording quality is variable as the tape stock is old and the recording equipment 'of its time' and often not of professional standard.  Rod Stradling's need to use noise reduction equipment has resulted in a muffled quality on some tracks, and some changes at times in the actual colour of George's voice.  Personally I consider that a small price to pay for the pleasure of listening to the man.  (Bill Leader's recordings, of really good quality, were unavailable for commercial and copyright reasons outside Bill's control.  This really shouldn't happen!)

There's a chain of thanks that's important here: Rhoma Bowdler who 'chance encountered' George and knew what she was doing; Charles Parker, Ewan McColl and Peggy Seeger; but mainly Roy Palmer for his dedication, skill and warmth, and Rod Stradling for giving us yet another piece of treasure.

Anyone interested in English styles of singing and repertory, in a rich and detailed picture of an industrial community and changing life patterns, anyone who wants to learn some good songs, or anyone who just likes to be told a good story by a wonderful storyteller, needs to buy this package.  The best tribute that we can offer George is to sing his songs, and name his name when we do. (sound clip - My Father's a Farmer)